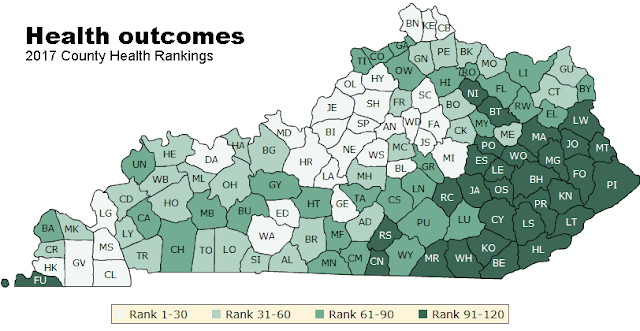 The premature death rate is getting worse in 44 of Kentucky’s 120 counties and improving in 12 counties, according to a health rankings report released Wednesday.

The figure is calculated using data from 1997 through 2014 and is part of the annual County Health Rankings & Roadmaps, released by the University of Wisconsin Population Health Institute and the Robert Wood Johnson Foundation.

Experts say the premature death rate is fueled by drug overdoses, which accounted for nearly 1,250 deaths in 2015, according to the Overdose Fatality Report by the Kentucky Office of Drug Control Policy.

Van Ingram, executive director of the Office of Drug Control Policy, told Bill Estep of the Lexington Herald-Leader that preliminary for 2016 are about the same as the 2015 numbers, but “It’s hard to celebrate leveling off.”

Beyond the drug issue, the latest County Health Rankings have much more to say. They give each county two scores: one for health outcomes, which include premature death and low birth weight, and one for health factors, such as access to physicians and areas to exercise, children living in poverty, violent crime, long commutes and other environmental dimensions. 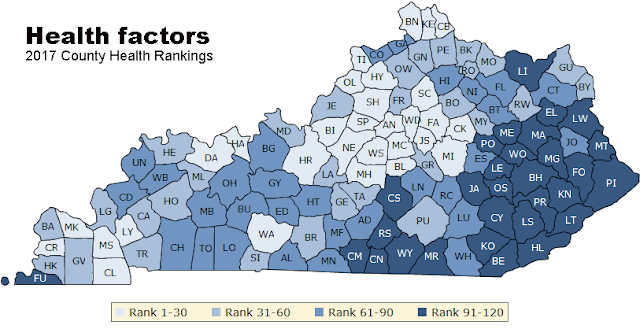 The highest ranked counties in health outcomes are Oldham, Boone and Spencer, respectively. Traditionally, counties with the highest rankings tend to surround cities, where there is better access to medical care and exercise opportunities, like parks, and incomes are relatively high. The lowest ranking counties tend to be poor and in rural Appalachia, and this year is no exception: Owsley, Wolfe and Breathitt.

“The rankings show that people living in Eastern and rural Kentucky counties tend to have much poorer health than those in urban Kentucky counties,” Ben Chandler, president and CEO of the Foundation for a Healthy Kentucky, said in a news release. “The rankings also make it clear that good health is influenced by many factors beyond medical care, including whether we can find and afford healthy foods, whether we can exercise safely in our neighborhoods, whether we have health insurance and if that insurance covers preventive care, and how safe our water is to drink and our air is to breathe.”

The report has been released annually since 2011. Since then, some counties have seen big improvements, while others have seen their situations worsen.

Hickman County is one of the success stories. It ranks 23rd, up by 53 spots since the initial report in 2011. Multi-year trends are important, because rankings can vary from year to year, especially in small counties like Hickman; it ranked 73rd in outcomes last year. The county’s health-factors ranking has also improved, to 37th from 58th in 2011, with an increase in employment and a decrease in preventable hospital stays.

Carter County has also shown great improvement over the years. It ranked 91st for the first three years of the report, and 90th in 2014, but rose to 82nd in 2015 and 68th in 2016. This year, it ranks 57th, showing improvements in both length and quality of life.

The latest move put Carter County into the second quartile of Kentucky counties. The rankings divide the counties into four groups because the differences among closely ranked counties can be very small, within the error margins for surveys that form part of the basis for the rankings.

Some counties, such as Menifee, have seen improvements in health outcomes despite lagging ion health factors. The county’s outcomes ranking bottomed out in 2013, when it placed 111th. It improved to 92nd in 2015 and 79th in 2016, and this year, zoomed to 36th. Somehow it is overcoming bad health factors, in which it ranks 97th. It has a high unemployment rate and a high percentage of children living in poverty.

Similarly, Cumberland County has steadily improved its numbers since 2014, when it reached a low outcomes rank of 107th. It improved to 102nd the following year and 97th in 2016. This year, it ranks 83rd in outcomes. Like Menifee, it still ranks lower (91st) in health factors, with too few dentists and a high number of preventable hospital stays.

Morgan County once had much higher outcome rankings than its neighbors, despite bad heath factors, and now those factors appear to be catching up with it. Morgan’s outcomes ranking slipped to 91st from 76th last year and 23rd in 2011. The county’s scores for both length and quality of life have steadily declined. The county also has a high unemployment rate and a high percentage of children in poverty.

For every county that moves up in the rankings, another has to take its place. Rockcastle County ranks 100th in outcomes and has experienced a steady decline since 2011, when it ranked 64th, partly due to high marks for quality of life. Since then, the county’s rate of premature death has increased and its quality of life scores have decreased. It suffers from a shortage of dentists and mental-health providers, with just one for every 8,500 people, drastically lower than either state or national figures.

View an interactive map of your county’s ranking, with details for each measurement, here.