Kids Count charts; for larger versions, click on each image.
—–

The 30th annual Kids Count Data Book on children’s well-being, released Monday by the Annie E. Casey Foundation and Kentucky Youth Advocates, ranks Kentucky 34th in the overall well-being of its children, where it has hovered since 2012. Nearly one in four Kentuckians are children.

Kentucky’s highest rank, 25th, was in health. One of the state’s bright spots is that it has so few children without health insurance, 4%, under the national average of 5%.

The state also continues to make progress in the areas of economic well-being and teen births; but the report also shows that more than one in five Kentucky children live in poverty, and 10 percent of them live in families where the head of the household doesn’t have a high-school diploma.

Growing up in such a family matters, because research shows that children who grow up in these households not only have “fewer socioeconomic advantages, but also are more likely to be born with a low birth weight, have other health problems, enter school unprepared and have limited educational and employment opportunities as adults,” the report says.

“The challenge of the Data Book — or any quality piece of research — lies in the answer to the question, ‘So what?’” Terry Brooks, executive director of Kentucky Youth Advocates, said in a news release. “This national report card on kids can become a catalyst for informed and thoughtful policy innovation for Kentucky’s children. Possibly even more critical given the environment in which we find ourselves today, the ‘So what?’ of the Data Book can provide a common ground for progress as we enter a highly contested and polarized campaign season.”

Kids Count measures 16 indicators to determine children’s overall well-being. The latest data are for 2017, and are compared with data from 2010. The report focuses on four major domains: health, economic security, education, and family and community. 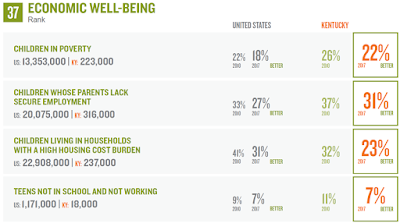 Between 2010 and 2017, the percentage of Kentucky children living in poverty dropped from 26% to 22%; children whose parents lacked secure employment dropped from 37% to 31%; and teens who were not in school and not working dropped from 11% to 7%.

The biggest improvement in economic well-being was a reduction in the number of children living in households with high housing costs. That share dropped from 32% in 2010 to 23% in 2017. Such a household is defined as one where more than 30% of monthly household pre-tax income is spent on housing-related expenses, including rent, mortgage payments, taxes and insurance.

This is good news because “paying too much for housing limits the resources families have for other necessities such as child care, food, health care and transportation, as well as their ability to save and achieve financial stability,” says the report.

As with many indicators, racial and ethnic disparities persist. In 2017, 38% of African-American children in Kentucky lived in households with high housing cost compared to 21% of white children. 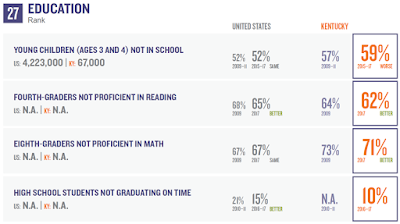 Education:Kentucky ranked 27th, up two spots from last year. The good news is that 90% of Kentucky high-schoolers graduate on time, ranking the state second in the nation, says KYA. 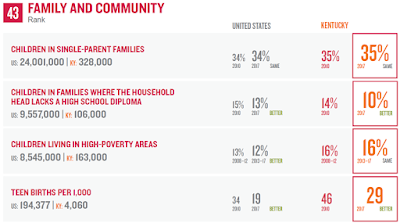 Several family and community indicators have changed little since 2010, such as: 35% of Kentucky’s children live in single-parent families, and 16% live in high-poverty areas, defined as neighborhoods where more than 30% of the households are in poverty.

The report says that along with higher levels of financial instability, “Residents of these neighborhoods contend with poorer health, higher rates of crime and violence, poor-performing schools due to inadequate funding and limited access to support networks and job opportunities.

Kentucky Youth Advocates encourages policymakers to prioritize policies and programs that would expand opportunities for children, including a refundable earned-income tax credit, expanded child-care supports, paid family leave, more outreach for the Children’s Health Insurance Program, raising the legal age to purchase tobacco products to 21, not changing the Medicaid program in ways that would decrease coverage for parents, and investing in in early literacy and quality child care.

Further, KYA points out the importance of making sure every child in Kentucky is counted in the upcoming 2020 census, noting that the 2010 census is estimated to have missed 12,500 of them.

“Without an accurate count of all kids in 2020, Kentucky risks leaving real money on the table that could be used for health care, education, child care and other vital programs many young children in low-income families count on for a healthy and strong start in life,” says the release.

The Kids Count Data Center provides current and trend data for 4,315 child well-being indicators related to each of the four domains in the report, at both a state and county level. It also offers a feature to create customized tables, maps, bar charts and graphs.