Chart by The Commonwealth Fund, which explains: (a) The 2019 rankings generally reflect 2017 data. (b) Comparisons are with a “baseline” period, which varies among the measured indicators. The report says, “There were generally four to five years between indicators’ baseline and current year data.”
—–

Kentucky remains in the bottom fourth of all states in the latest ranking of states’ health systems, though it inched up in the rankings two spots to 40th overall. Its bright spot is access to health insurance; its biggest increasing problem is drug abuse, as measured by overdoses.

The Commonwealth Fund Scorecard on State Health System Performanceevaluates states on 47 indicators of health in five areas: access and affordability, prevention and treatment, avoidable hospital use and hospital cost and healthy lives,which includes measures on premature death, health status and risky behaviors. This is the Commonwealth Fund’s seventh scorecard, with the first one released in 2007.

The report found that suicide, alcohol and drug-overdose deaths have increased markedly in the past decade and that the prevalence of these “deaths of despair” vary by region. Kentucky is one of 13 states, all east of the Mississippi River, with more than 30 drug-overdose deaths per 100,000 people.

Nationally, from 2005 to 2017, the report shows that deaths from drug overdoses went up 115%, deaths from alcohol increased 37% and deaths from suicide increased 28%. In every state, deaths from those causes have risen at least 3 percent since 2005.

“Drug overdose mortality is disproportionately impacting states in the eastern part of the country and suicide and alcohol related deaths are occurring at higher rates in the west,” David Radley, senior scientist at The Commonwealth Fund and lead author of the study, said during a press conference. 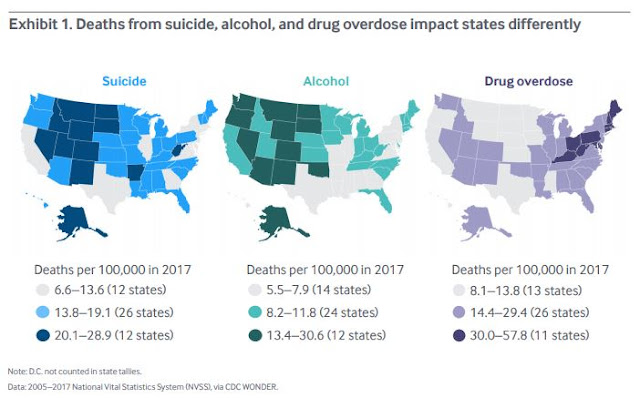 “What we’re seeing is a regional epidemic when it comes to premature deaths from suicide, alcohol, and drugs,” Dr. David Blumenthal, president of The Commonwealth Fund, said in the news release. “It’s going to take solutions that meet local need, and greater cooperation across all sectors — at both the federal and state level — to end the crisis that is shortening life expectancy in the United States.”

Sara Collins, vice-president of The Commonwealth Fund and co-author of the study, said one of the best things states could do to ensure that people with substance-use disorders have access to care is to expand Medicaid to people who earn up to 138% of the federal poverty line, as Kentucky has under the 2010 Patient Protection and Affordable Care Act, or “Obamacare.”

Kentucky’s Medicaid expansion has given it one of its few bright spots when it comes to health care: the low number of people without health insurance.

In 2013, 21% of Kentuckians lacked health insurance. Medicaid expansion in 2014 has been the major factor in lowering that to 7%, which ranks Kentucky eighth best among states.

Despite these gains in coverage, the report notes that health insurance remains unaffordable for many, especially for those whose incomes are just over the eligibility threshold for the Obamacare marketplace subsidies.

And at the same time, it says employer plans are growing at a faster rate than median incomes, “leaving many families paying more for their insurance, but getting less.”

Kentuckians spent 7.3% of their median income on employee premiums for health insurance, slightly above the national average of 6.9%.

Compared to the baseline data on 45 measurements, Kentucky has improved on 18 indicators, shown little or no change on 18, and worsened on nine.

Kentucky’s top rankings were in prevention and treatment (20th) and access and affordability (23rd), but it remained near the bottom for health disparities (40th), avoidable use and cost of hospitals (48th) and healthy lives (49th). It ranked 50th for its large numbers of adults who smoke, adults who report fair or poor health and children who are overweight or obese. (50th was not the worst ranking because the District of Columbia was counted as a state.)

Among the state’s top indicators, Kentucky ranked fourth for its high percentage of adults who got an annual hemoglobin A1C test, an indicator of diabetes; and seventh for its low number of home-health patients who did not get better at walking or moving around.

Home-health patients’ mobility was Kentucky’s most improved measurement, other than the much lower uninsured rate; 22% did not improve their mobility in 2017, compared to 36% in 2013. Another big improvement was in adults who went without care because of cost, falling to 12% in 2017 from 19% in 2013.

Hospital 30-day mortality measures death rates for Medicare patients with a principal diagnosis of heart attack, heart failure, pneumonia or stroke within 30 days after admission, regardless of whether the patient dies while still in the hospital or after discharge.

The report also estimated what would happen if the state improved to the level of the best-performing state, which once again was Hawaii. Among other things, 108,982 more adults and children in the state would have health insurance; 136,534 fewer adults would skip needed care because of cost; and 174,435 more adults would receive age- and gender- appropriate screenings for cancer.

For the first time, the scorecard also includes regional comparisons. The Commonwealth Fund has a data center (datacenter.commonwealthfund.org) that allows users to explore state health system performance and policy data through custom tables, graphs and maps.