Districts in white are not tobacco-free. For a larger map, click on it.
—–

Only 15 of Kentucky’s 172 school districts, or 8.7 percent, have not passed a tobacco-free policy to match a state law that will take effect July 1, 2020, according to the Foundation for a Healthy Kentucky, which says it expects nearly all of districts to enact the policy before they have to.

The law, for which the foundation campaigned, will ban use of all tobacco products, including electronic cigarettes, on school-owned property and school-sponsored events in all public schools. The law allows school boards to opt out of the ban, but it appears to be prompting them to opt in. 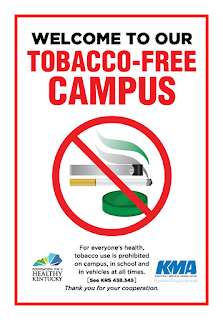 The law also requires schools to post signs, but provides no funding for signage. The health foundation, the Kentucky Medical Association and the Kentucky Foundation for Medical Care have created signs in consultation with the Kentucky School Boards Association. and are offering them to districts that adopted tobacco-free policies after the law passed.

Districts that adopted tobacco-free policies after the bill became law can get the indoor, outdoor and vehicle signs on a first-come, first-serve basis.

In January 2020, if supplies remain, the signage will be offered to all school districts, including those that had previously passed tobacco-free school policies. An order form and information about the signage can be found on the Tobacco-Free for Students website, www.tobaccofreestudents.org.