Researchers in Kentucky and Ohio have received a $5.7 million grant from the National Cancer Institute to increase colororectal cancer screenings and follow-up care among under-served people in Appalachia.

The research will be led by the cancer centers at the University of Kentucky and The Ohio State University. “We are excited to have the opportunity to take on the challenge of promoting colorectal cancer screening and follow-up in rural communities that have an elevated burden of this disease,” said Mark Dignan, co-leader of the Cancer Prevention and Control Research Program at UK’.

The five-year study is designed to help community health centers and communities implement multi-level evidence-based strategies to increase their rates of colorectal cancer screenings, as well as follow-up and referral-to-care for patients between the ages of 50 and 74. 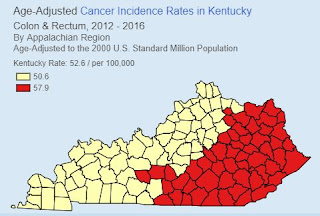 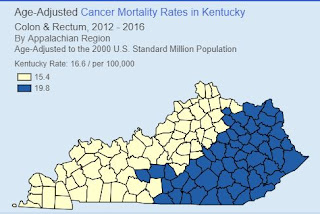 Kentucky has doubled its colorectal screening rates in the past 20 years, “but more work is needed to increase access to screening and follow-up care in the Appalachian region,” says the news release.

“Rates of colorectal cancer incidence and related mortality in Appalachia are among the highest in the United States, and far too many people in this region do not receive potentially life-saving colorectal cancer screening,” said Electra Paskett, co-leader of the cancer research program at OSU.

In that same period, 4,275 Kentuckians died from colon and rectal cancer, according to the Centers for Disease Control and Prevention. For every 100,000 people in Kentucky who died from these cancers, 19.8 of them lived in Appalachian counties and 15.4 of them lived outside the region.

The study was piloted in Lewis County, Kentucky and Guernsey County, Ohio, with activities rolling out to 10 other counties over the next three years, including Breathitt, Carter, Lawrence, Morgan and Powell counties in Kentucky and Adams, Belmont, Hocking, Lawrence and Morgan counties in Ohio.