Almost one in four Kentuckians are children. How goes their health?

Most have health insurance, fewer teenagers are getting pregnant, and fewer babies are being born at a low birth weight — but those situations vary widely by county, according to the annual Kentucky Kids Count County Data Book.

The report, released Nov. 19 by Kentucky Youth Advocates and the Kentucky State Data Center at the University of Louisville, is part of the 29th annual release of Kids Count, a nationwide initiative of the Annie E. Casey Foundation to track the status of children in the United States.

The Data Book provides information on the overall well-being of children in each county, through 17 measures in four areas: economic security, education, community strengths, and health and family.

One great health concern in Kentucky is the 18.7 percent of women who smoke during pregnancy. Nationally, the rate is 6.9%, according to the United Health Foundation.

Kentucky’s rate has stayed about the same for the past few years, the good news is that it has lower that the 20.7% recorded five years ago.

“Smoking during pregnancy remains a serious health problem in Kentucky for both mothers and their babies,” Ben Chandler, president and CEO of the Foundation for a Healthy Kentucky, said in a news release about the report. “It’s an incredibly difficult addiction to break, and it increases health risks for babies both before and after they’re born, even raising the risk of sudden infant death syndrome.”

Smoking during pregnancy also increases the risk of preterm birth, which the March of Dimes says is the leading cause of infant death, low-birthweight babies, and birth defects of the mouth and lip, says the federal Centers for Disease Control and Prevention. 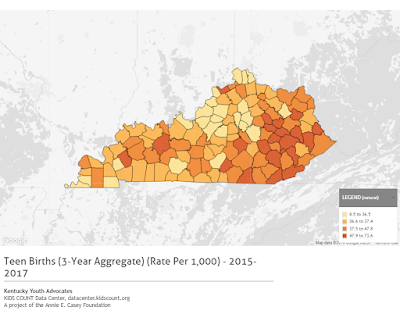 And like so many measures in the report, the differences between counties is great, ranging from a low of 8.5 teen births per 1,000 in Oldham County to a high of 73.6 in Elliott County.

Other key findings about Kentucky’s children in the report include:

This year’s report also took a deep dive into four additional areas, including child-care supports, teen suicide, the connection between schools and health, and racial disparities in the child-welfare system.
It also goes into detail about the 2020 census and why it is critical that every child get counted. KYA Executive Director Terry Brooks pointed out at a Nov. 19 news conference in Louisville that Kentucky gets billions of dollars based on the census count.

“If you are interested in school funding for low-income kids and special-needs kids, it’s based on the census. If you are interested in childcare supports and food and nutritional support programs, it’s based on the census,” he said. “The list goes on and on. So in a state where we argue about where to get more revenue, one of the most clear and unifying ways to get more revenue is to make sure that every kid is counted.”

The report says that more than 12,000 Kentucky children under age 5 were not counted in the 2010 census, costing the state more than $12 million per year for just five large programs for which data is available.

Brooks stressed the importance of using the report to drive policy changes to benefit Kentucky’s children. “Data has to demand action,” he said. “We know that what gets measured gets attention and what gets attention gets changed. That’s the whole premise of Kids Count.”

The 2019 Kentucky County Data Book was made possible with support from the Casey Foundation and other sponsors, including  Passport Health Plan, Kosair Charities, Avesis, Corona Spanish Media, Delta Dental, and Mountain Comprehensive Care.