A recent analysis by The Commonwealth Fund, a foundation interested in the health-care system, shows that the overall cost of employer-sponsored insurance plans keeps going up, and families are spending more of their income on health care.

“The majority of people under age 65 in the U.S., 164 million, get their health insurance through an employer, and that insurance is less and less affordable for many of them,” Dr. David Blumenthal, president of The Commonwealth Fund, said in a news release. “Ensuring that everyone can afford health insurance and health care will require policy fixes and systemwide efforts to get to the heart of the health care cost problem: the exorbitant prices we often pay for health care in the United States.”

The analysis found that Kentucky families covered through employer plans spent on average, 13 percent of their yearly income for health coverage in 2018 — or $7,471 in out-of-pocket spending. That was slightly above the national average of 11.5%.

And because Kentuckians make less money on average than people in other states, they spend a larger share of their incomes on their premiums and deductibles. For example, in Kentucky, the median household income in 2018 was $50,247, compared to $61,937 nationally.

“Over the last decade, employer health-insurance premiums and deductibles have grown faster than workers’ wages. This is concerning, because it may put both coverage and health care out of reach for millions of people,” Sara Collins, lead author of the study, said in the release.

Offering a bit of perspective, the Commonwealth Fund points out that high-deductible plans leave many people at risk of being underinsured, which is defined as having a deductible equivalent to 5% or more of their income. That said, a $2,930 deductible would leave many middle-class families in Kentucky underinsured, making it difficult for them to pay their medical bills and more likely resulting in skipping care because of the cost.

In general, the report says, employees pay about one-fourth of U.S. employers’ portion of the premium costs — and that holds true in Kentucky. Employer-sponsored insurance premiums, which includes contributions from both the employer and employee, for single coverage in Kentucky in 2018 was $6,690 (up 7.8% from 2016) and $19,277 for family coverage (up 7.5% from 2016).

The researchers note that recent proposals to address the rising cost of health insurance include enhancing the affordability and cost protection of Affordable Care Act marketplace plans, allowing people with employer plans to buy coverage on the marketplace, or replacing private insurance with a public plan like Medicare.

The study used data from the federal Medical Expenditure Panel Survey. Researchers surveyed more than 40,000 business establishments in 2018, with an overall response rate of 67.8%. It looked at both premiums, the amount a person has to pay each month for their plan, and deductibles, the amount a person has to pay before an insurance company’s payments kick in; and the size of the costs relative to the median income in each state. 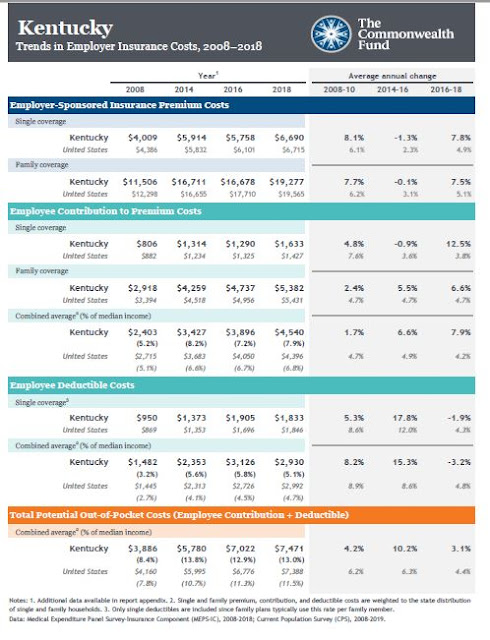