Kentucky has seen 785 laboratory-confirmed cases of influenza since the flu season started in late September, and health officials say there are many more. So far the hot spot has been around Hazard.

A recent uptick in cases has prompted the state health department to upgrade the state’s flu activity level to “regional,” a classification that is applied when increases in flu cases have been confirmed in at least two, but fewer than half, of the state’s 17 regions.

According to the weekly influenza surveillance report, during the week of Nov. 17-23, 275 new cases were reported in Kentucky, with increases in four of the state’s 17 regions. No flu-related deaths have been reported this season.

Last season, the state had 17,665 confirmed cases and 196 flu-related deaths, including two children.

Counties bordering Perry were also high on the list: Knott with 65 cases, Leslie with 69, and Letcher with 35. Nearby Pike County had 49. Bullitt County also had 35 cases. That said, every region of the state has seen some flu activity this season.

Knott, Leslie, Letcher and Perry counties are all in the Kentucky River District Health Department in Eastern Kentucky. Its director,  Scott Lockard, said the actual flu numbers are likely higher since they only include lab-confirmed cases, and providers often quit testing for flu when they are in the full swing of the season. “We’ve had a lot more sick people than that,” he said.

Lockard said the best way to prevent the flu is to get vaccinated each year. He said his health department is constantly working to encourage people to get vaccinated and to dispel much of the misinformation that persists about immunization.

“It’s an uphill battle with education about that,” he said. “It just concerns me that there’s so much misinformation about vaccines in general and flu vaccines.”

For example, he said, many people believe things that are just not true: that getting a flu shot will cause them to get the flu, or that it’s better to get the flu than the vaccine, especially if they are in generally good health.

Lockard stressed that getting a flu shot is not just about an individual’s self-protection, but is also about protecting the community by promoting “herd immunity,” which occurs when enough people have been immunized against a disease to protect others who are not immunized. Some can’t get vaccinated because their immune systems are too weak, or because they are too young.

“It’s not always about you, it’s about your elderly grandmother that you go see. It’s about the baby you are around,” Lockard said, adding later, “I think people underestimate the flu. They don’t realize how deadly it can actually be to our very old and our very young.”

So far this season, about 250 of Kentucky’s 785 lab-confirmed cases have been in children under 10, and about 100 have been among those from 10 to 20, highlighting the importance of getting children vaccinated—especially because they are more vulnerable to serious complications of the flu, including death.

Lockard also advised to not underestimate the importance of following good hygiene practices to prevent the flu, like covering your cough and making sure you are washing your hands with soap and water for at least 20 seconds.

“There’s a big difference in washing your hands and getting your germs wet,” he said.

He also stressed the importance of avoiding close contact with those who are sick, staying home when sick, and keeping frequently touched surfaces — like door knobs and handrails — clean and disinfected. He also discouraged shaking hands with others during the flu season, calling it “the worst thing you can do.” That can be hard during the holiday season, but flu is very contagious. 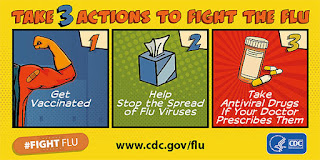 Persons who develop symptoms should contact their medical provider immediately to determine if they are a good candidate for treatment with an antiviral drug, which could shorten the course of the illness or reduce its severity.

The federal Centers for Disease Control and Prevention recommends that everyone over six months of age get a flu shot, and it especially encourages people who may be at higher risk for complications or negative consequences to get one, including children 6 months to 5 years old and their caregivers; women who are or might be pregnant during flu season; people 50 and older and their caregivers; obese people; those with chronic health problems; residents of long-term care facilities, and health-care workers.

Vaccinations can be given any time during the flu season, but take about two weeks following the administration of the vaccine for the recipient to develop protection from the flu.

If you’re looking for a place to get your flu shot, the CDC offers an interactive “flu vaccine finder” that allows you to type in your ZIP code to find nearby locations that offer shots. Local health departments offer the vaccine. Medicaid and Medicare and most private insurance providers cover flu vaccination at no cost to the patient as a preventive service.