The latest Kentucky Health Issues Poll shows that three out of four Kentucky adults support taxing electronic cigarettes, which is the only tobacco product in the state that isn’t already taxed.

The poll, taken Oct. 16 to Dec. 6, found support for a tax on e-cigarettes, at a similar rate as a pack of cigarettes, was virtually the same among Democrats (78%)  as among Republicans (76%), with independents (72%) close behind.

Support for the tax has increased since 2014,  the last time the poll asked the question, when only 53% of Kentucky adults favored such a tax.

Rep. Jerry Miller, R-Louisville,  has filed House Bill 32 to impose a 27.5% excise tax on e-cigarettes and related devices, commonly known as “vapes” though they produce aerosols as well as vapors.

“We think parents and adults who work with kids understand that the most appalling problem with vapes right now is the youth epidemic,” Ben Chandler, president and CEO of the Foundation for a Healthy Kentucky, which co-sponsors the poll, said in a news release. “Taxing these products on par with cigarettes is one of the most effective steps we can take to reduce youth vaping, and we’ll be advocating for that as a measure to protect kids during this year’s General Assembly.”

The Coalition for a Smoke-free Tomorrow, which comprises more than 225 Kentucky organizations, also supports the legislation. The coalition estimates that such a tax would generate $34 million in its first year. Chandler is the chair of the coalition.

Legislative leaders indicated in December at the Kentucky Chamber of Commerce‘s legislative preview that there is support for such a tax in the 2020 legislative session, which recently convened, although it is uncertain if it will be as high as the cigarette tax.

Miller unsuccessfully sponsored an e-cigarette tax bill in the 2019. In 2018, an e-cig tax was included in legislation that raised the tax on traditional cigarettes, but was removed in the Senate just before final passge and after lobbying by Altria Group, the largest tobacco company and 35% owner of Juul Labs, the largest e-cig company. 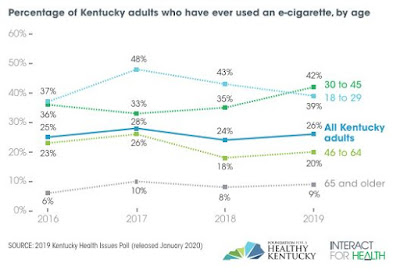 The poll also found that about one in four Kentucky adults, or 26%, had ever tried an e-cigarette, a rate that has remained about the same since the poll first started asking the question in 2016.

Of the adults who had ever tried e-cigarettes, 9% of them said they used  them every day or some days. That rate was 7% in 2017, which statistically is essentially the same.

Teens use e-cigarettes at the highest rate. The Kentucky Youth Risk Behavior Survey found that the percentage of students who had ever tried an e-cigarette increased from 44% in 2015 to 53% in 2019.

The poll also asked Kentucky adults whether they believed e-cigarettes were just as harmful, more harmful or less harmful as traditional cigarettes for youth and for adults.

A recent article in the American Journal of Public Health summarizes a growing body of research that shows the many dangers of e-cigarettes for both youth and adults. It also refutes the oft-made claim that e-cigs are 95% safer than traditional cigarettes, calling this estimate a factoid, or an unreliable piece of information that has been repeated so often it becomes accepted as fact.

The Kentucky Health Issues Poll is funded by the foundation and Interact for Health a Cincinnati-area foundation. It surveyed a random sample of 1,559 via landlines and cell phones. The margin of error is plus or minus 2.5 percentage points.