The logo used by state and local health departments
—–

Driven by the state’s pension crisis and a non-equitable funding model, Kentucky health departments warn that if the state doesn’t change its requirements for how they prioritize available public health resources — and how they are funded — many of them will have to cut essential services, and half could close their doors.

Legislators and health-department officials are seeking a complete overhaul of the state’s public health system, not only to help it survive in the face of a $40 million deficit in 2020, but also focus on core programs to improve the state’s poor health outcomes.

“House Bill 129 codifies the prioritization of public health funding at every resource level — state, local and federal — to programs that provide the most significant opportunity to improve Kentucky’s overall health,” said Allison Adams, president of the Kentucky Health Department Association. “It also codifies the methodology in how that funding is distributed at the local level so that it is equitable at each county level.”

The current system funds each health department with the same formula, regardless of its ability to generate local funds. The new formula would take that into account, making it more equitable, Adams said. In other words, departments that have more resources would get less state funding under this model.

A spreadsheet prepared by Adams’ group estimates that 14 of the 61 county and district health departments would get less state funding, and the rest would get more, using a formula based on a county’s population, its ability to support its health department with its current taxing authority, how many employees the county would need to provide only the health services required by law, and an estimated increase in environmental fees.

The 14 departments that would get less funding would be in Breathitt, Bullitt, Clark, Fayette, Franklin, Johnson, Knox, Madison, Marshall, Montgomery, Oldham, Whitley and Woodford counties, and the Wedco District Health Department, which serves Harrison, Nicholas and Scott counties. The losses range from $36,729  in Whitley County to a high of about $1 million for the Lexington-Fayette County Public Health Department.

Dr. Kraig Hambaugh, director of the Lexington agency, cautioned that the numbers in the spreadsheet are estimates, with many based on assumptions. He said that even with the predicted gains and losses, the model is designed to make sure every county’s core public health needs can be met.

Humbaugh also stressed that the new model is just one part of the departments’ funding puzzle, since it doesn’t address their looming pension obligations. He said that if nothing changes before July 1, the beginning of the next fiscal year, the current pension obligation of 93 percent of payroll would make his department use about $6 million of its $17 million budget for retirement costs.

All that said, he recognized that his department would lose money under this new model, but said he still supported it.

“This shouldn’t turn into an us-versus-them kind of game, one health department versus the other, because we’re all part of one larger system that is designed to promote health in the commonwealth and to protect the public’s health,” he said.

He added that he felt HB 129 also shows legislators and the public that local health departments are willing to do their part to economize and use their resources wisely.

Adams said the association has been talking about this new funding methodology for about five years and that association members have had opportunity to vet it. Further, she said an over-whelming majority of the departments supported the new model during a roll-call vote.

“This is a funding methodology that provides equitable resources to all of our communities so that we can provide the most basic public health services at each county level,” she said.

HB 129, sponsored by Rep. Kim Moser, R-Taylor Mill, passed the House Health and Family Services Committee, which she chairs, on Jan. 16. It is now in the Appropriations and Revenue Committee. The “Public Health Transformation” bill  has 20 bipartisian sponsors.

This new model has been in the works for several years, but gained momentum after health-department pension obligations were set to jump from 49.47% of payroll to 93%.

During a special session last summer, lawmakers gave health departments, regional universities and quasi-governmental agencies the choice of staying in the Kentucky Retirement System and paying the full obligations or leaving the system, either by paying a lump sum or buying their way out over time. Those that choose to leave would need to move employees to a 401(k)-type plan.

The departments say none of these choices are viable, and none have left KRS. The state Department for Public Health has said that without some relief from their pension obligations, dozens of health departments are at risk of closing.

Gov. Andy Beshear has proposed giving the departments about $16.5 million in each year of the budget as a way to freeze their employer contribution rate at 67.41% of payroll. The Democratic governor’s proposal would have to be approved by the Republican-controlled legislature.

Lawmakers are working on another pension solution through HB 171, sponsored by Rep. Jim DuPlessis, R-Elizabethtown, which would change how health departments, regional universities and quasi-governmental agencies, pay for their pensions altogether. It would move away from the current  percentage-of-pay” formula and move to one that requires entities to pay what they owe the pension system over 27 years, which is often called “level dollar funding.” It passed the House State Government Committee Feb. 6 and is expected to be sent to the Appropriations and Revenue panel.

What is Public Health Transformation? 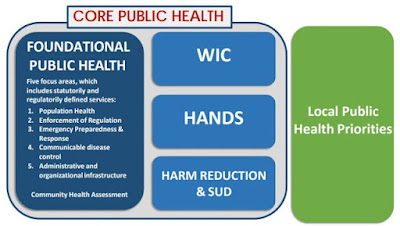 The new public health model calls for health departments to only be required to provide four “core public health” areas. They include services required by law or regulation; the federal Women’s, Infants and Children nutrition program; the HANDS program, which stands for Health Access Nurturing Development Services for child rearing; and harm reduction and substance-use-disorder programs, including syringe exchanges.

“The programs that we’ve identified that are the most basic, which we call foundational services, are the programs that have been identified as comprehensive public-health systems,” Adams said. “So if we provide those at every level, over time we should expect better health, better health outcomes and longer life expectancies.”

The plan also requires departments to perform community health assessments, which many of them already do, to determine local public health priorities beyond the core requirements. Such priorities would have to meet certain criteria for the department to address them and would also need to be funded separately.

For example, a vaccination clinic run by the Todd County Health Department that serves only Amish and Mennonite families would be considered a local public health priority.

“It’s a niche need in Todd County that the public health department, because of strict state and federal funding guidelines, has struggled for years to fund,” Alex Acquisto reports for the Lexington Herald-Leader. She notes that the program costs about $5,000 a year.

The clinic serves about 3,000 people, or a fifth of the county’s population, Acquisto reports, telling of  their monthly horse-and-buggy trips to the clinic to get vaccinations for their infants and toddlers, most of whom only speak Pennsylvania Dutch.

Until a decade ago, when the clinic started, virtually none of the Amish or Mennonites in the area were vaccinated. “If you have a fifth of your population who isn’t vaccinated, then your whole public is at risk,” Jennifer Harris, the health department’s director, told Acquisto.

The bill would also allow health departments, for the first time, to refuse state program funding that their counties don’t need in order to invest in the services they do need.

“Without passage of this bill, in Todd County, the Amish and Mennonite and public-school vaccination clinics would be some of the first services cleaved from the budget, because Harris can no longer afford them,” Acquisto writes.

The bill also requires local governments to ensure a minimum public-health tax rate of at least 1.8 cents per $100 of assessed property value, or equivalent alternative funding, to be allocated toward foundational public-health programs.

And to help offset some of the added cost, health departments are asking for a one-year reprieve on a rule that restricts increasing environmental fees to no more than 5% each year. After that year is up, the statute would go back into place. This would allow health departments to bring those fees in line with what they actually costs, since they are currently subsidizing the difference.

At the committee meeting, Moser said, “The public health transformation initiative will result in a more simplified and a more focused public health model that prevents duplication, encourages shared responsibilities and resources and expertise to create economies of scale, a fairness across the state, and clearly defines the role throughout the system.”