“It’s going to be a beautiful weekend again, and we cannot repeat last weekend where we saw a lot of crowds come together,” he said at his daily press conference. “And so as the weather gets nicer, I need you to be even stronger to make sure that we are doing what it takes.”

Beshear stressed that practicing social distancing is the one part of the show that Kentuckians can run in this time of uncertainty and that by doing this, they will reduce the spread of this virus.

“This is the one part that is entirely in our control, where we as Kentuckians without any help from the federal government or anybody else can slow the spread of this virus, can make sure we have the health-care capacity we need by decreasing the number of cases over time or at least lessening them,” he said. “This is the best way that you as an individual can help in this fight. . . . I need you, we as a state need you; your actions are so important.”

Beshear showed a recent White House graph, which President Trump has used, to demonstrate the importance of social distancing and the reason for community mitigation measures to limit the spread of the virus. It showed upwards of 2.2 million deaths from covid-19 with “community mitigation” interventions and between 100,000 and 240,000 deaths with them.

He then showed a graph translating the White House model to Kentucky, showing that the state would have between 21,000 and 29,000 deaths without any mitigation, and 1,300 to 3,200 deaths with them. 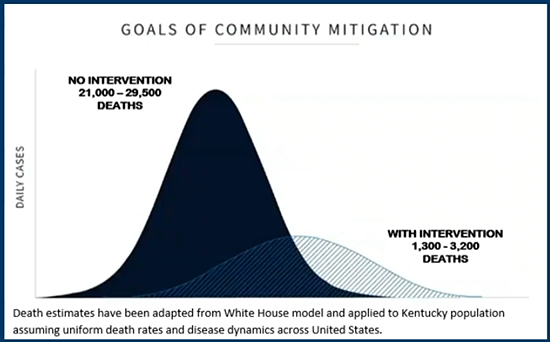 Beshear called the White House modeling an “optimistic scenario” and cautioned that modeling being done by the state, which he would soon share, is “more pessimistic” and “will be tough for people to see.” He added, “Our concerns are that this virus can spread faster than this and its toll may be greater than this.”

Then the governor painted a grim picture of what can happen when Kentuckians don’t obey his order banning gatherings, reading from a Hopkins County Health Department document that he said had been slightly edited:

Hopkins County has been hit really, really hard. We know the community is reeling. .. . We had a church that had a preacher from Texas come down to Dawson Springs March 15 and 16 for a revival at another church. When he left multiple families were sick. The church placed a post on social media that those people did not have the corona, they just had the flu. According to several people interviewed, they were encouraged not to self-quarantine and still come to church. They did not practice social distancing at the revival. Hopkins County now has 24 cases, hundreds of contacts and two deaths with an epidemiological link to this revival. We’ve additionally had cases in Muhlenberg, Clark and Warren counties related to it as well. Also we have a nursing home with a case, a business with a potential outbreak from this one revival, a health-care facility and an ambulance service that has had multiple personnel affected and we closed a hospital unit and opened up a covid unit. This has spread throughout our community.

Hopkins County is a “hotbed” for covid 19, County Judge-Executive Jack Whitfield told The Messenger of Madisonville. The county has been among the daily leaders in new cases in the past week.

Beshear said, “To anybody who is not listening to the recommendations, to anybody that is still trying to hold — it’s not just a service, but a meeting — notice what one meeting can do, and it spreads far beyond those that are there. But because a couple of leaders in a different part of the community decided that they were going to ignore the guidance, they have put the entire community at risk. . . . You absolutely can’t be doing that.”

On the other end of the state, “The judge-executive of Eastern Kentucky’s largest county sharply criticized residents during a news conference Wednesday when he announced that Pike County has its first confirmed case of covid-19, saying many residents have refused to abide by social distancing,” Will Wright reports for the Lexington Herald-Leader. “Despite Eastern Kentucky’s high population of at-risk residents, many have continued to gather in large groups and complain about orders issued . . . to slow the spread of the deadly virus, Pike County Judge-Executive Ray Jones said.”

Other news about the virus and its covid-19 disease Wednesday included:

Previous ArticleLawmakers returning to Frankfort to pass a budget and other bills; here are some health-related measures that could pass
Next ArticleCovid-19 update: Hospital executives worry about having enough staff, say others should stay home to avoid asymptomatic spread