List of testing sites in which the Commonwealth of Kentucky is playing a role; to enlarge, click on it.
—–

As a short list of Kentucky businesses plan to reopen next Monday, Gov. Andy Beshear spoke at length Monday about how he would proceed with a slow, gradual restart, noting that some states were seeing a spike in coronavirus cases and covid-19 deaths as they relaxed restrictions.

Such increases have been projected by the Trump administration, according to internal government documents published by The New York Times, confirming the fears of public-health experts that reopening the economy will cause such spikes.

“”Some people see stable numbers and they think it is no longer contagious, and it is,” Beshear said at his daily briefing. “People see stable numbers and think it is no longer deadly, it is because we continue to see deaths. So let’s remember even as we work at being healthy at work, this is still a very scary virus out there, and I’m using that term intentionally. We have to be gradual, we have to be smart, and we have to make the right decisions, and we need everybody on board.”

Beshear showed headlines from other states that are seeing spikes in case numbers, including one that said, “Mississippi governor reconsiders reopening state after its largest spike of covid-19 deaths and cases.”

“I want to commend Mississippi’s governor; his name is Tate Reeves. We were elected at the same time, that’s probably the only thing we have in common and he’d say the same thing,” Beshear said. “Governor Reeves was planning this big re-opening, I think starting today, but got a big spike in cases and paused it. All right, that is doing the right thing. It’s saying that ultimately the virus is in charge of the timing, and we are going to protect the health and safety of folks. I hope he keeps after that.

“But what we are seeing in a number of places that are opening up or that are more aggressive in their timetable is more cases or major concerns. Listen, I hope all those leaders are trying to do the right things, but I want to learn from others that decide they want to be first. When it’s being first at doing something that can risk people’s lives, I do admittedly want to watch, because I want to make the best, smartest decision for you. I want to make that decision that protects you and your parents and your kids and I want to do this right. And I know the decisions that I make are going to be the difference between life and death for real people and for Kentuckians.

“So understand that I’m not going to be the fastest. I’m just not going to do that. . . . I think we’ve got to be the smartest, based on public health, based on a gradual phasing in, where we can protect our population.”

Asked about Indiana’s faster opening on some fronts, Beshear said he and Gov. Eric Holcomb talk weekly and that he continues to believe, as does Louisville Mayor Greg Fisher, that re-opening at a gradual pace is the best way to proceed. Fisher said on KET’s “Kentucky Tonight” that he is trying to work out compromises with mayors across the river.

Asked about the lack of a two-week decline that is called for in federal guidelines for reopening, Beshear reiterated that new cases remain at a plateau of new cases, that the state has increased its testing capacity, and there was federal money available to hire 700 people to trace the contacts of people who have been exposed to people who have been infected or exposed.

On May 11, Kentucky will allow manufacturing, construction, automobile and boat dealers, office-based businesses to reopen at 50 percent capacity. It will also allow horse racing without fans, pet grooming and boarding, and studio photography.

In addition to a list of 10 rules that all businesses must follow to reopen, specific regulations for each of the businesses that are allowed to open next week have been posted on kycovid19.ky.gov under the Healthy at Work tab.

“It’s important that you meet these guidelines, these requirements, because it allows us to be healthy at work,” said La Tasha Buckner, the governor’s chief of staff and general counsel. “That allows us the successful reopening and to make sure we’re making advancements and staying at the plateau level and hopefully declining.”

A second phase of health-care activities, non-urgent outpatient and ambulatory services, such as colonoscopies, will be allowed to resume Wednesday, May 6. Additional business sectors are scheduled to re-open May 20 and May 25.

Beshear has said those reopenings will be delayed if they can’t be done safely, and there were signs Monday that the virus remains in control.

The New York Times reported: “As President Trump presses for states to reopen their economies, his administration is privately projecting a steady rise in the number of coronavirus cases and deaths over the next several weeks. The daily death toll will reach about 3,000 on June 1, according to an internal document obtained by The New York Times, nearly double the current number of about 1,750.”

The projections by the Federal Emergency Management Agency, based on government modeling, “forecast about 200,000 new cases each day by the end of the month, up from about 25,000 cases now,” the Times reported. “The projections confirm the primary fear of public-health experts: that a reopening of the economy will put the nation back where it was in mid-March, when cases were rising so rapidly in some parts of the country that patients were dying on gurneys in hospital hallways as the health care system was overloaded.”

The report from FEMA and the Centers for Disease Control and Prevention shows counties with “elevated incidence growth” of cases, as well as “elevated incidence of plateau” and other categories. Compared to its major adjoining states, Kentucky compares favorably, but there are many “elevated” counties in its western half: Ballard, McCracken, Henderson, Daviess, McLean, Simpson, Warren, Allen, Meade and Jefferson. Boone, Kenton, Campbell, Jessamine and Perry are also elevated. 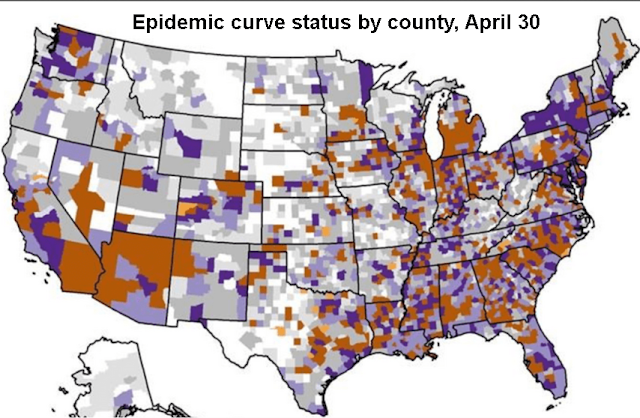 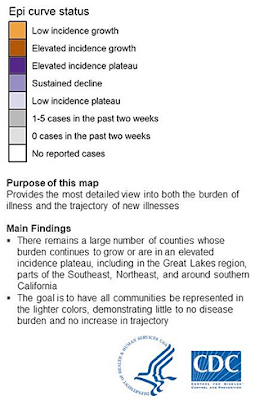 For a larger version of the map, click on it.

The Times noted that Scott Gottlieb, who was President Trump’s commissioner of food and drugs, said Sunday on CBS, “We expected that we would start seeing more significant declines in new cases and deaths around the nation at this point. And we’re just not seeing that.”