When it comes to the health of Kentucky’s children, who make up about one-fourth of the state’s population, the good news is that most have health insurance, fewer teens are getting pregnant, and fewer of the state’s women are smoking during pregnancy. The bad news is that the percentage of babies born at a low birth weight has inched up, and many chronic problems pose obstacles to children’s well-being.

That’s the upshot of the annual Kentucky Kids Count County Data Book, released Nov. 17 by Kentucky Youth Advocates and the Kentucky State Data Center at the University of Louisville. It’s part of the 30th annual release of Kids Count, a nationwide initiative of the Annie E. Casey Foundation to track the status of children in the United States. The Data Book provides information on the overall well-being of children in each county, through 17 measures in four areas: economic security, education, community strengths, and health and family.
The report says Kentucky showed improvement in 11 of the 17 measures of child health, made no progress on three and declined on three.
It shows fewer pregnant women in Kentucky are smoking during pregnancy, dropping from 20.4% in 2011 to 17.8% in 2016-18. But that’s still nearly triple the national rate of 6.5%, according to America’s Health Rankings.
In some counties, though, this problem is much worse, and got more so between 2016 and 2018. Eighteen counties had rates of 30% or more, led by Owsley County, with 45.3%, the only one with a rate over 40%. Also, 23 counties reported higher rates in 2018 than 2016. This problem correlates closely with income; Owsley is one of the nation’s poorest counties; Oldham County, one of Kentucky’s wealthiest, had the lowest rate, 9%.
Smoking during pregnancy increases the risk of health problems for developing babies, including birth before full term, low birthweight, and birth defects of the mouth and lip. Smoking during and after pregnancy also increases the risk of sudden infant death syndrome, according to the Centers for Disease Control and Prevention.
Another measures that worsened in the latest report was the number of low-birthweight babies. The March of Dimes says babies born with low birthweight are more likely to have certain health conditions later in life, including diabetes, heart disease, high blood pressure, intellectual and developmental disabilities, metabolic syndrome and obesity.
In 2016-18, 8.9% of Kentucky babies were born with a low birthweight, defined as less than 5.5 pounds. That was up very slightly from 8.8% in 2011-13. Again, those rates varied across the state with 58 of the 120 counties showing an increase, and 30 counties with rates higher than 10%. Carlisle County had the lowest rate, 5.6%, and Martin and Union counties had the highest, 12.7%. 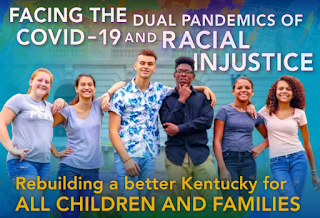 This year’s report also examines the impacts of what it calls “the dual pandemics” of covid-19 and systemic racial injustice on children and families.

The report points to the disparities around case and death rates among Latinx and Black Kentuckians; the challenges that children with special needs face with remote learning; the challenges for children who are being raised by grandparents, who are at higher risk for the virus because of their age;  and the fact that children in low-income families are more likely to have parents with low-wage jobs that put their families at higher risk of contracting the virus, while being much less likely to have paid sick leave if they get ill.
“The covid-19 pandemic reminds us once again that opportunities differ based on where you live, your family’s earnings, and the color of your skin,” says the report.It lays out a plan of action to create “strong, equitable recovery” for all Kentuckians that includes responding to the impacts of trauma, prioritizing mental health supports, addressing the issues of low-wage workers, especially among families of color; strengthening access to health coverage and care for communities of color, bridging the digital divide for employment, education and health, prioritizing closing the gaps in educational achievement that has been exacerbated by the pandemic; and ensuring that families can meet their basic needs until the economy recovers.
“The dual pandemics have shown us that the status quo was not working for many Kentucky kids and their families,” Terry Brooks, executive director of Kentucky Youth Advocates, said in a news release. “We must use this opportunity to rethink and rebuild our systems in a way that achieves the vision of Kentucky being the best place in American to be young, regardless of the color of your skin, your zip code, or income level.”
The Louisville Courier Journal published five op-eds this week from people whose work is directly affected by the issues addressed in the Data Book. Click here for one that offers an overview of the data; click here for one that addresses child care; click here for one that addresses parental incarceration; click here for one that addresses health inequity, especially among Latinx populations; and click here for one that addresses the digital divide.
The 2020 Kentucky County Data Book was made possible with support from the Casey Foundation and other sponsors, including Passport Health Plan by Molina Healthcare; Kosair Charities; Avesis Essential Benefits; and Mountain Comprehensive Care Center.
The Kids Count Data Center provides easy access to county and school district data for about 100 indicators and allows the user to rank states, counties and school districts; to create customized profiles of the data; to generate customized maps; and to embed maps and graphs in websites or blogs. Click here to see your county’s profile.