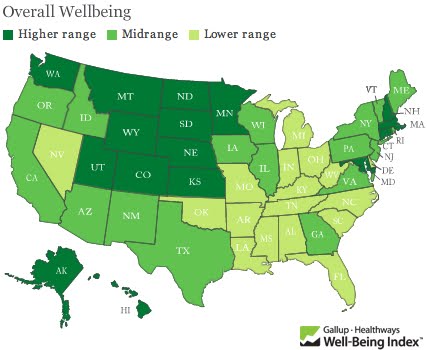 Kentuckians are among the least happy and healthy citizens in the country, with the state ranking second lowest in a survey that rates the emotional and physical health of Americans.
Only West Virginia had a lower well-being score, according to the 2010 Gallup-Healthways Well-Being Index. West Virginia ranked lowest in three of six measured categories, while Hawaii got the highest well-being scores in three of the six categories.
Kentucky ranked lowest in the country in the “healthy behaviors” category, which measures smoking rates, weekly consumption of fruit and vegetables and frequency of exercise. Of course, people who engage in unhealthy behaviors may not necessarily be unhappy.

The other categories include life evaluation, emotional health, work environment, physical health and basic access. Respondents answered a large spectrum of questions that pertained to their life now and how they expect it to be in five years. In the emotional-health category, for example, they were asked about how often they laugh, if they were treated with respect and if they experienced sadness, anger or depression. In the category of work environment, people were asked about how they are treated by their supervisor, if they are able to use their strengths while at work and if they’re satisfied with their job.

The survey was based on random-digit-dial telephone interviews with 352,840 adult Americans living in all 50 states and in the District of Columbia. Interviews were conducted every day from January to December 2010. The margin of sampling error for most states is plus or minus 1 to 2 percent, but is as high as plus or minus 4 percent for the smallest states. For results based on the total sample size, “one can say with 95 percent confidence that the maximum margin of sampling error is plus or minus 1 percentage point,” says Elizabeth Mendes of Gallup.
The range of scores was less than 10 points, and many states were close together, so precise rankings are uncertain. Kentucky’s well-being score was 61.9 out of a possible 100 points. The 2010 score for the nation was 66.8. West Virginia’s score was 61.7 points; Hawaii’s was 71. Results for congressional districts and major cities will be released later this month. (Read more)

Previous ArticleSenate blows the whistle on the session, leaving Medicaid at an impasse; Beshear says a special session will start Monday
Next ArticleMost Kentuckians want to treat drug offenders, not jail them