In keeping with its second-to-last state ranking in the 2010 Gallup-Healthways Well-Being Index, which assessed people’s physical and emotional health across the country, one of Kentucky’s congressional districts and its major metropolitan area have also ranked low. 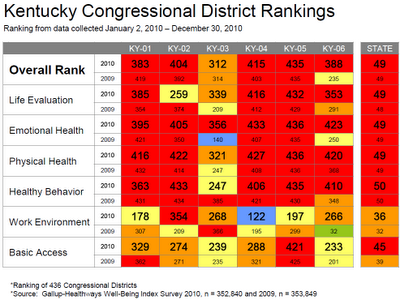 Of the 188 metropolitan areas assessed, Louisville ranked 170th, not much different from its 151st ranking in 2009. Lexington ranked 115th, way down from 15th. Among metro areas centered in other states, Cincinnati was 123rd; Clarksville, Tenn., was 162nd; Evansville was 172nd; and Huntington was 188th, dead last in the nation. It has scored poorly on several other health measurements. 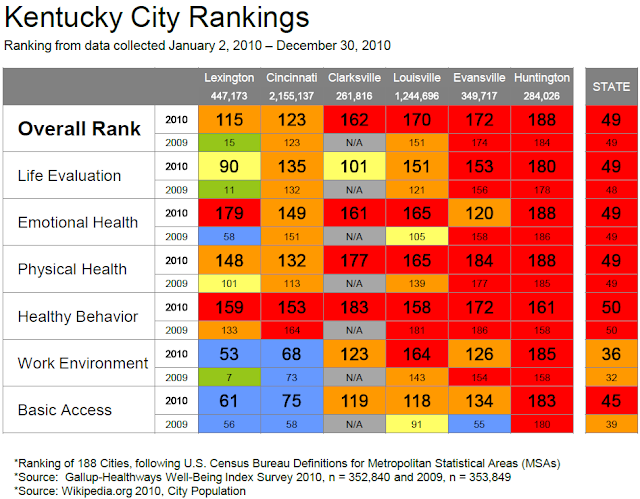 The well-being index assessed respondents on their emotional health, physical health, life evaluation, work environment, healthy behaviors and basic access. Respondents answered a large spectrum of questions that pertained to their life now and how they expect it to be in five years. In the emotional-health category, for example, they were asked about how often they laugh, if they were treated with respect and if they experienced sadness, anger or depression. In the work-environment category, people were asked about how they are treated by their supervisor, if they are able to use their strengths while at work and if they’re satisfied with their job.

Compared to the rest of the country, Kentucky as a whole ranked 49th, surpassing only West Virginia. Hawaii had the highest well-being index in the country.

It bears noting that the rankings are based on very narrow margins of difference, with many states’ scores just a few tenths of 1 percentage point apart. While Kentucky’s overall well-being index was 61.9 out of a possible 100 points, Hawaii, which ranked first in the country, had a score of 71. The 2010 score for the nation was 66.8. West Virginia’s score was 61.7 points. Because the scores were so close together, precise rankings are uncertain. The ranges for congressional districts and cities are greater, but the error margins are larger.

The survey was based on random-digit dial telephone interviews with 352,840 adult Americans living in all 50 states and the District of Columbia. There were 5,881 Kentuckians who participated in the study. Of those, 1,046 live in the 5th Congressional District and 1,632 live in the Louisville area, which includes Jefferson County and the Indiana border. Interviews were conducted every day from January to December 2010.