Kentucky is one of the top 20 states for suicide, with nearly 700 Kentuckians taking their own lives each year, and 109 of the state’s 120 counties reported at least one suicide in 2013, the latest confirmed figures available.

However, suicide it is often considered a taboo subject, rarely addressed publicly by elected officials, other community leaders and the news media.

That changed in Carter County, when Sheriff Jeff May told state Rep. Jill York of Grayson that that county had eight suicides in 2015, she knew she had a responsibility to do something about it, she said in an interview with Kentucky Health News.

York, May and County Judge-Executive Mike Malone facilitated a suicide-prevention workshop Feb. 13 that attracted about 25 attendees on the “coldest day of the year, all while a University of Kentucky basketball game was going on,” she said, leaving the meeting with a shared commitment to hold another one in the summer.

York encouraged other state and local officials to use their “clout to get people to listen” and “ring the alarm bell.”

She urged officials “to step forward and be able to pull the resources together and throw the push behind it . . . to say, we’re going to talk about this even if it’s uncomfortable because it’s important, because we’ve got lives we’ve got to save,” York said. “Stop being polite, stop letting it be something that we don’t talk about. To say, if we are losing one person in our community to this, then that is too many.”

The workshop was led by local experts on mental health from nearby universities, Pathways Inc., and the Kentucky Suicide Prevention Group.

KSPG Chair Melinda Moore said research shows for every suicide there may be as many as 130 people who knew that person and are affected by their suicide, and 25 are deeply affected. And almost half of us know someone who has died by suicide.

“So, unfortunately, what we know from research going on at the University of Kentucky, which I am a part of . . . we found out that people who had been exposed to suicide, impacted significantly by suicide, had higher depression, higher anxiety scores and thoughts of suicide,” she said.

Moore wrote in an op-ed for the Lexington Herald-Leader, “Many are silenced by the shame and confusion around this experience and profound loss, which is reinforced by their community’s inability or unwillingness to address it.”

Moore, a licensed psychologist and assistant professor at Eastern Kentucky University,  joined York in encouraging communities to host suicide prevention forums, noting that suicide is very isolating and very stigmatizing for the loved ones or the family members left behind.

“We need to have more of these community forums so that people who are impacted by these suicide deaths can come and talk to individuals who know something about it,” she said. “It is very confusing. People feel responsible. They feel guilty and then they are isolated. They feel very ashamed. It could be that their safe community doesn’t quite understand what happened so they may feel blamed as a result.”

Moore said that any community that wants to facilitate a forum should call the Kentucky Suicide Prevention Group for assistance in putting it together.

“What we are trying to do is to shed light and provide accurate data, information and resources to the bereaved or resources for people who are suicidal,” she said. “We have a real suicide problem here in Kentucky and by talking about it publicly, in an appropriate way… it is very important to dispel the misinformation and the stigma that surrounds it… also, just to provide the bereaved with the knowledge that there are resources for them and they should not be alone. They should not be suffering in silence.”

FOR JOURNALISTS: The Grayson Journal-Enquirer and the Olive Hill Times, sister weeklies, published a story on the forum by their daily parent, The Independent of Ashland. In a later column, reporter Lana Bellamy said the most important part of the forum was “the stigma attached to suicide, families affected by suicide and those contemplating suicide. Perpetuating shame or disgust will only worsen the problem and further stymie the  community’s effort in getting more resources to help those affected by suicidal actions.”

A broad range of experts, agencies and interest groups, including the Associated Press Managing Editors, have developed a set of guidelines for reporting on suicide. They are available at ReportingOnSuicide.org and appear below. 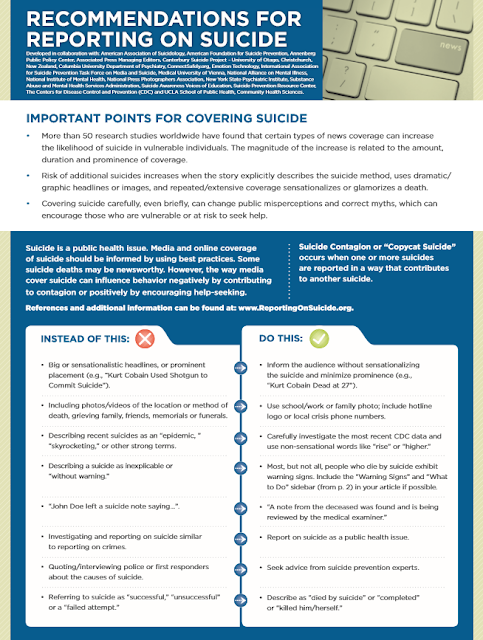 Previous ArticleAfter eight suicides in 2015, Carter County officials host a suicide-prevention forum; other communities are urged to do likewise
Next ArticlePAC ad calls for ‘no more Obamacare’ though Bevin and Stivers say they want to keep covering people in Medicaid expansion