The expansion of Medicaid to nearly 500,000 more Kentuckians “must be preserved,” according to a group of hospital executives who launched a campaign to persuade legislators to expand the state tax on health-care providers to help pay for it, Deborah Yetter reports for the Louisville Courier Journal.

Norton Healthcare Vice President Riggs Lewis, the group’s president, said at an Aug. 22 news conference in Frankfort that the expanded tax would raise enough revenue to fund the expansion, even as Medicaid costs continue to increase, Yetter reports. “Our group believes that conservative, comprehensive health-care tax reform can make that a reality,” Lewis said.

According to Gov. Matt Bevin’s administration, Kentucky’s Medicaid budget is facing a $200 to $300 million shortfall over the next two years and that will nearly double when Kentucky’s federal Medicaid match increases from its current 6 percent to 10 percent in 2020.

Yetter reports that the group, called Balanced Health Kentucky Inc., asks lawmakers “to consider expanding a tax now paid by hospitals, nursing homes and a few other health providers to others that don’t pay, such as physicians, dentists and mental health counselors.”

Lewis added that expanding this tax to other providers “would boost state funds available to draw federal money, which covers most of Kentucky’s Medicaid costs,” Yetter writes. At the same time, the hospitals would like to see the tax rate lowered. A chart from the Balanced Health website shows who pays what: 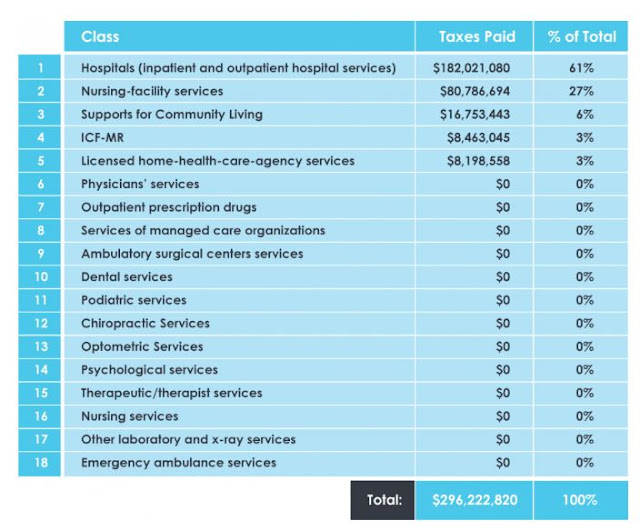 The federal government now provides about 80 percent of the $11 billion a year Kentucky spends on Medicaid. The state provider tax currently generates about $300 million a year; hospitals pay about $182 million of that

Board members of the group include executives from Norton Healthcare, Baptist Health, Appalachian Regional Healthcare, Manchester Memorial Hospital (in the hometown of Senate President Robert Stivers) and St. Elizabeth Healthcare, Yetter reports. An executive from Taylor Regional Hospital is also listed on their “volunteer team.”

The expansion of Medicaid to people who earn up to 138 percent of the federal poverty level in 2014 under the Patient Protection and Affordable Care Act resulted in more Kentuckians being able to pay for their care, especially in rural hospitals, which had had high rates of patients with no insurance. Since 2014, Kentucky’s uninsured rate has dropped from about 14 percent to 5 percent, one of the sharpest drops in the nation.

Yetter writes that Adam Edelen, who as state auditor examined Kentucky hospitals’ finances prior to the expansion, said that Medicaid expansion had created a “reversal of fortune for many rural hospitals that had been struggling.”

“It’s been their salvation,” Edelen said at the news conference. “You can’t overstate how important the Affordable Care Act has been to rural hospitals.”

Lewis acknowledged that any tax increase would have to be approved by lawmakers and said that the groups only suggestion was that it be “lower and broader,” Yetter reports.

On a webpage titled “Who will lose coverage?” the Balanced Health Kentucky’s website offers an interactive map of Kentucky that shows how many of the 500,000 Kentuckians who gained coverage through the expansion are in each county, the number of hospitals in that county and how many employees are hired by those hospitals. The map also breaks this information down by state legislators in both chambers, and by congressional districts.

Yetter reports that the campaign got mixed reviews.

Jason Bailey, executive director of the left-leaning Center for Economic Policy, told her that while his organization doesn’t oppose a tax on other health providers, he pointed out that hospitals already benefit from a “freeze” that lawmakers placed on what hospitals must pay in 2006. He suggested that lawmakers consider lifting that freeze because hospitals’ revenue has greatly increased since then.

“They aren’t contributing more than they were 12 years ago and they’re making a lot more money,” Bailey said.

Sen. Morgan McGarvey, D-Louisville, told Yetter the proposal could lead to a way to permanently fund the expansion. “The alternative is unplugging it,” he said. “You can’t just take 500,000 people off health care.”

But Jim Waters, president of the Bluegrass Institute, which promotes smaller government and lower taxes, told her that his organization would rather see Medicaid downsized by getting more people into jobs with health coverage. “I think the goal should be reducing that number,” he said.

And though neither Senate or House Republicans, who hold majorities in their respective chambers, were ready to make a comment on the proposal, Yetter reports that Lewis said the group has been presenting their proposal to legislative leaders, who have shown interest, but no commitment.

Yetter writes that “the proposal comes at an uncertain time for Medicaid in Kentucky.”

A federal judge vacated the state’s new Medicaid plan just days before it was set to start on July 1, saying that federal officials had not sufficiently considered public comments about it, nor had they adequately considered the state’s estimate that in five years its Medicaid rolls would have 95,000 fewer people with the plan than without it, largely for non-compliance with its requirement.

The state’s new plan would require able-bodied adults who are not primary caregivers to work, attend school, take job training or volunteer 80 hours a month, or enroll in a drug-treatment program if appropriate. It also includes small, income-based premiums and lock-out periods for non-compliance, among other things.

Bevin has said Kentucky will end the expansion if courts block his plan, and has issued an executive order putting the termination into effect six months after a final court judgment.

Previous ArticleFoundation for a Healthy Kentucky report documents its change from a small philanthropy to ‘an influential statewide advocate’
Next ArticleKy. reviewing how to regulate short-term health policies that aren’t so short any more; health expert advises to read the fine print