Kentucky is one of three states under an influenza threat defined as “regional,” with confirmed cases in 11 of the state’s 17 regions. During the 2018-19 flu season, Kentucky has had 78 laboratory-confirmed cases of the flu and two deaths from it, according to the state Department for Public Health‘s weekly influenza surveillance report. The flu killed 325 Kentuckians in last year’s season.

Flu is a very contagious disease caused by the influenza virus. There is no treatment for it, so health officials encourage everyone six months and older to get a flu shot, even if for those who are generally considered healthy — including children.

A Centers for Disease Control and Prevention study looked at flu-related deaths in children younger than 18 over the course of six flu seasons from October 2010 through September 2016 and found that half of the deaths happened in otherwise healthy children, with most of them younger than 2. The report also shows that antiviral treatment was only given in about half of the children’s deaths. The report notes that only 22 percent of the children were vaccinated.

Antiviral drugs can shorten the course of the illness or reduce its severity, but must be taken within two days of a person getting the flu.

“This study stresses how quickly the flu can become life-threatening for children. Nearly two-thirds of children died within seven days of developing symptoms. Over one-third died at home or in the emergency department prior to hospital admission. . . . This is a reminder that parents should seek prompt medical care for young children and children at high risk for flu complications with flu symptoms,” says the CDC news release about the study.

Part of the problem in deciding whether to seek treatment or not is that flu symptoms are similar to cold symptoms, making it hard to differentiate between the two different viruses.

Dr. Charles Patrick Davis offers some advice on this and more in MedicineNet. 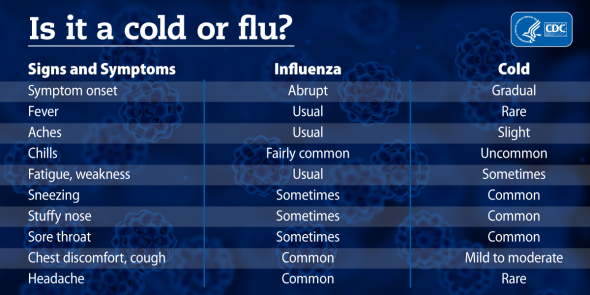 Davis notes that in general, flu symptoms are more intense than cold symptoms and can include fever, body aches, chills, and headaches, and can develop nausea and vomiting. He adds that while colds usually don’t require medical care, if you suspect you have the flu you should see your health care provider.

He adds that unless you have a medical problem, most people don’t need to seek care for a cold, and offers tips on when to seek medical care for flu. Here they are:

If you’re looking for a place to get your flu shot, the CDC offers an interactive “flu vaccine finder” that allows you to type in your zip-code to find nearby locations that offer flu shots. Local health departments also offer the vaccine.