Kentucky leads the nation in the number of syringe exchange programs, but passing such programs continues to require great amounts of public education and perseverance. 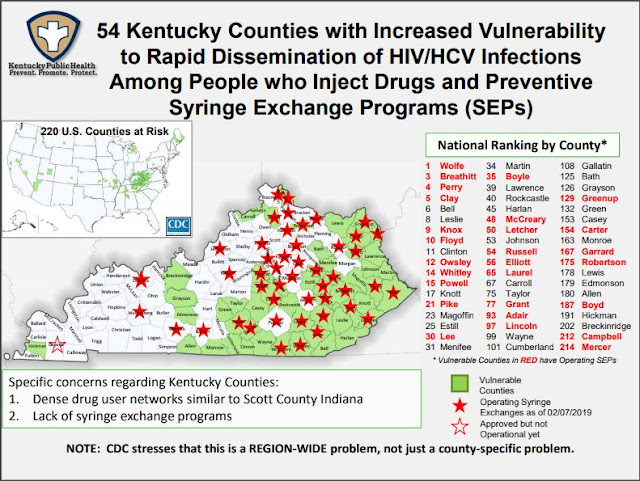 Daviess County, home of Owensboro, the state’s fourth-largest city, is the latest to launch a syringe exchange. That brings the number of exchange locations to more than 50, in 47 of the state’s 120 counties. Graves County has approved a program, but it’s not yet operational.

Western Kentucky has been slow to adopt such programs, which were approved by the state legislature in the 2015 anti-heroin bill as part of an effort to decrease the spread of HIV and hepatitis C, which are commonly spread by the sharing of needles by intravenous drug users.

Daviess County’s program, which will serve residents of the seven counties in the Green River health district, is the fourth syringe exchange to open west of Louisville. The others are in Muhlenberg, Warren and Barren counties.

Daviess County Judge-Executive Al Mattingly said the slow embrace of exchanges in Western Kentucky is because there has been less need for the programs in that part of the state, Katie Pickens reports for The Owensboro Times, an online newspaper.

The latest Kentucky Health Issues Poll found that the percentage of adults in Western Kentucky who knew someone who used heroin was 12 percent, compared to 36 percent in Northern Kentucky, 24 percent in Lexington and Louisville and 21 percent in Eastern Kentucky.

Daviess County is not one of the 54 Kentucky counties listed by the federal Centers for Disease Control and Prevention to be most at risk to outbreaks of HIV or hepatitis C as a result of IV drug use, but it is near three counties that are on that list that haven’t approved syringe exchange programs: Breckinridge, Grayson and Edmonson. None are in the Green River health district.

Of those, Grayson County has come closest to getting one. The county health board and the Leitchfield City Council have already approved it, but the county Fiscal Court, failed to get a second to a motion for it on Jan. 15, Matt Lasley reports for the Grayson County News-Gazette. (The health board, fiscal court and the legislative body of the city where the exchange is to be located must approve it.)

The failed vote followed two hours of testimony, both for and against the program, Lasley reports. And it seems the course of these discussions are similar across the state.

Proponents, largely from the medical community, line up to present evidence-based research about syringe exchange programs that shows how they do not encourage people to start using IV drugs,or increase the frequency of use among current users; how they reduce the spread of infections like HIV and hepatitis C; how they do not increase community crime; how they do increase community safety by taking dirty syringes off the street; and how they are known to help connect people to treatment, with one study finding that syringe-exchange participants are five times more likely to enter a drug treatment program than non-participants.

Opponents say they believe that the programs enable addiction, increase drug use or would bring drug users from neighboring counties into their communities, which could lead to more crime. Others struggle with providing an addict with a tool to feed their addiction. And many simply say they don’t believe the research.

“Commonwealth’s Attorney Rick Hardin said he was hesitant to believe statistics that say needle exchange programs actually increase an individual’s likelihood to attend rehabilitation, as well as whether they cut down the spread of diseases such as hepatitis and HIV,” Lasley reported for the Leitchfield newspaper. Hardin also prosecutes felony cases in Breckinridge and Meade counties.

On Jan. 22, the News-Gazette published a guest editorialby Dr. Joe M. Lee, medical director of the local health department, that tried to overcome the opposition by giving the paper’s readers more information. “Part of the magistrates’ concern was that the people they represent don’t understand the program and were generally opposed to it,” Lee wrote. He said there had been “huge increase in Hepatitis C and HIV/AIDS” in the county, mainly as a result of intravenous drug use.

“This is a public health emergency,” he wrote in bold letters.”Please encourage your magistrate to vote YES and let’s help our county begin recovery from this epidemic. You may be saving the life of a child, a loved one, a neighbor or a friend.” Grayson County Judge-Executive Kevin Henderson said he may call up the issue again, Lasley reports.

Meanwhile, the Twin Lakes Regional Medical Center in Leitchfield will soon offer an opioid medical stabilization program for expectant mothers. CEO Wayne Meriwether said he started the program because one of the hospital’s OB-GYNs said he cares for a large number of mothers who are addicted to drugs, Amy Lindsey reports for the News-Gazette.

Farther east, in the Bluegrass region, Scott County is one step closer to adopting a syringe exchange. After the fiscal court voted it down in December, with two magistrates absent, it was called back up for a vote in January and passed 5-3. The program already has the approval of the county’s board of health and now must be approved by the Georgetown City Council, Paul Watson reports for the Georgetown News-Graphic. Scott County has been debating the issue for about two years.

Other localities that are actively considering a syringe exchange program are Henderson and Todd counties and Cave City in Barren County.

The chair of the House Health and Family Services Committee, Rep. Kim Moser, R-Taylor Mill, told Kentucky Health News that she would like to see the law changed to let the local health board and health department start syringe exchange programs on their own.

“This is the only issue that the legislature gets involved with in telling the health department what to do,” said Moser, who once ran the Northern Kentucky branch of the state Office of Drug Control Policy.

Another point of contention is whether these programs should be based on the weekly injection needs of the client – called needs-based – or whether they should require a one-for-one exchange of syringes.

Health officials say that if the goal of the program is to stop the spread of infectious diseases such as HIV and hepatitis C, Kentucky must allow intravenous drug users to have as many needles as they need in order to have a clean one for every injection, and that a one-for-one requirement defeats that purpose.

A one-for-one model is also listed on the Cabinet for Health and Family Services‘ website as one of the “practices to avoid” because it “results in sharing of needles.”

Senate Majority Floor Leader Damon Thayer, R-Georgetown, a critic of the program since its inception, has filed Senate Bill 69 that would require syringe exchanges to dispense only one clean needle for each used needle.

“I would love to get rid of the needle exchange altogether,” Thayer told Lawrence Smith at WDRB, “but I don’t think I could get that passed.” He added, “I respect the public health argument. I just am philosophically opposed to taxpayers paying for a needle for someone to do an act that is illegal.”

Moser said she doesn’t support Thayer’s bill and hopes it doesn’t get out of the Senate Health and Welfare Committee. “I oppose it,” she said. “I do not think that removing programs that are working, that are getting people into treatment is the way to go.”

Moser pointed out that health departments are statutorily required to reduce communicable diseases, and that’s what a syringe exchange program does. Further, she said Kentucky can’t afford to pay $80,000 per hepatitis C treatment for its Medicaid patients, when a “very simple, cost effective” solution to prevent hepatitis C is a six-cent needle.

Dr. Lynne Saddler, Northern Kentucky Health Department‘s district director, also opposes Thayer’s bill. She told Terry DeMio of the Cincinnati Enquirer, “The science is clear that a 1:1 [one-for-one syringe] policy is not effective in stopping the spread of HIV through injection drug use.”

The Louisville and Fayette County programs use a needs-based model, as do some others. But many of them start off by giving out a set number of needles on an as-needed basis, and then move to a one-for-one model. Counties that use any grant money from the Kentucky Agency for Substance Abuse for their syringe exchange programs are required to use a one-for-one model.