FRANKFORT, Ky. — A bill to make Kentucky school properties tobacco-free passed unanimously out of the House health committee on Feb. 7 and was posted for passage on the consent calendar in the House on Monday, Feb. 12.

House Bill 11, sponsored by Rep. Kim Moser, R-Taylor Mill, would ban the use of tobacco and electronic cigarettes on all school-owned properties, including all school events on such property. The bill does not prohibit the possession of tobacco and e-cigarette products, just the use of them. Enforcement rules would be left up to individual school boards.

“This is a reasonable and workable bill. . . . and it’s a good place to stop addiction where it starts,” said Moser, who is also the new chair of the House Health and Family Services committee. 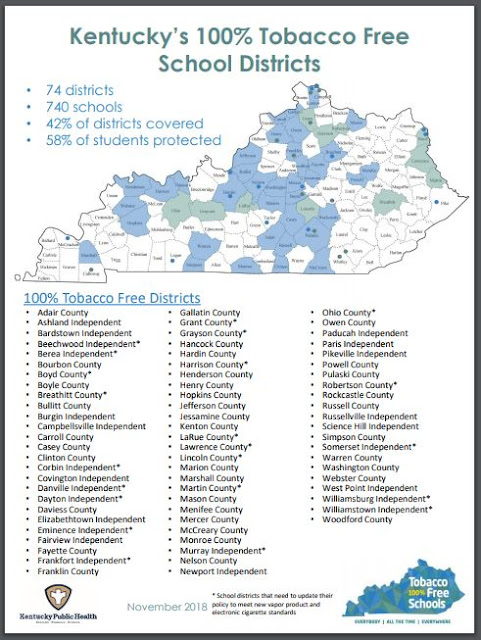 Fewer than half of Kentucky school districts have enacted such policies. As of November, 74 of the 173 districts had adopted 100 percent tobacco-free policies, covering 740 schools and 58 percent of the state’s students. Federal law only prohibits smoking insideschools that receive federal funding.

But this year could be the year the measure passes, especially given the recent surge of e-cigarette use by teens. Since the last legislative session, their e-cig use has become so widespread that the U.S. surgeon general has called it an epidemic.

Federal research showed a 78 percent increase in “vaping” among high-school students between 2017 and 2018, with the number of vapers surpassing 3 million. The same report showed an increase of 48 percent among middle schoolers. And though state-level data hasn’t been released, focus groups led by Kentucky Youth Advocates showed a similar uptick in the state.

Jack Patty, an 18-year-old senior at Mayfield High School, told Moser’s committee that e-cigarette use in his school is rampant — especially the Juul, which looks like an oversized flash drive and is easy to hide.

“Whenever my teacher leaves the room you can usually see these flying through the air,” Patty said while holding up a Juul device. “The kids have to get their nicotine hits while no-one is watching.”

Patty added, “It’s just hypocrisy” for teachers to teach students about the harms of tobacco use, then step outside for a smoke break. Mayfield’s school district has a limited smoke-free policy that does not include smoking outdoors or at school events.

Dr. Patrick Withrow, a retired cardiologist from Paducah who now educates Kentucky teens about the dangers of cigarettes and e-cigarettes, said one Juul pod has as much nicotine as a pack of cigarettes, and that he has met teens who can empty one pod in three hits. Further, he said he finds that teens have no idea that e-cigarettes are more addictive than cigarettes.

Withrow said the industry has a “three-prong strategy” to get kids hooked. He said they make e-cigs cool and easy to hide; they add a product that makes them “smooth” on the throat, as well as flavorings that appeal to children; and they add high levels of nicotine to create an addiction.

“We could be erasing literally decades of progress [in reduction of nicotine use]. The time for this bill is this session,” said Bonnie Hackbarth, vice-president for external affairs with the Foundation for a Healthy Kentucky and the lead staff person for the Coalition for a Smoke-free Tomorrow.

Moser said the bill also has the support of Kentucky School Boards Association, the Kentucky Association of School Superintendents, the tobacco industry and even the Juul corporation. If passed, it would take effect July 1, 2020; normally, new laws take effect 90 days after the legislature adjourns.

In addition, the measure has the support of 87 percent of Kentucky adults in a statewide poll and the lobbying support of the coalition, which comprises about 180 groups across the state.

The superintendent of Franklin County schools, Mark Kopp, told the committee that his district adopted such policies in 2011 and have since seen a “large decrease in the percentage of and the amount of tobacco usage.”

“It has been one of the best things for us in terms of giving us teeth to be able to build into our discipline policy as well as our code-of-conduct,” Kopp said. He added, “Speaking on behalf of my fellow superintendents who do not have this policy in place, please, please pass this piece of legislation.”

Previous ArticleBowling Green’s ‘street medicine’ program for homeless serves 60 per month, is one of few in small metropolitan communities in U.S.
Next Article47 Ky. counties have syringe exchange programs, but only half of the 54 at high risk of HIV and hepatitis C outbreaks have them