Teens’ use of electronic cigarettes is overwhelmingly responsible for erasing years of progress in reducing teen tobacco use, according to the latest annual National Youth Tobacco Survey.

The survey found that 4.9 million middle and high school students reported being current users of some type of tobacco product in 2018, a third again as many as the 3.6 million in 2017.

That amounts to more than one in four high school students (27 percent) and about one in 14 middle schoolers (7.2 percent) using a tobacco product in 2018, according to the new Vital Signs report published by the Centers for Disease Control and Prevention.

The increase came almost entirely from the increase in electronic cigarette use, to 21 percent from 12 percent the year before. That represented an increase of 1.5 million teens. The report found no significant change in the use of any other tobacco products.

“The explosion in teen vaping in just the last year has now erased all the progress health advocates had made in cutting teen tobacco use since 2011,” said Ben Chandler, president and CEO of the Foundation for a Healthy Kentucky, which is trying to make all Kentucky schools tobacco-free. 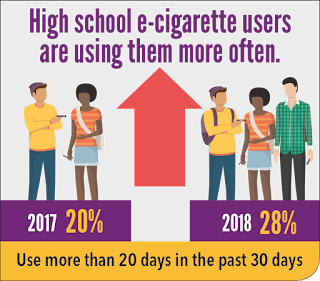 The survey also found that young users of e-cigarettes were using them more often. The percentage of high schoolers who “vaped” at least 20 of the past 30 days increased to 28 percent in 2018 from 20 percent in 2017.

This is the fifth year in a row that e-cigs were the most commonly used tobacco product among high schoolers. This was followed by cigarettes (8.1 percent), cigars (7.6 percent), smokeless tobacco (5.9 percent), hookah(4.1 percent) and pipe tobacco (1.1 percent).

E-cigarettes were also the most used tobacco product among middle schoolers, at 5 percent, up from 3 percent in 2017. This was followed by cigarettes and smokeless tobacco at 1.8 percent each, cigars (1.6 percent), hookah (1.2 percent) and pipe tobacco (0.3 percent).

Teens who used tobacco products were often found to use multiple products. Among current tobacco users, about two in five high school students and one in three middle schoolers used two or more tobacco products in 2018. The most common combination in both groups was the e-cigarette and the traditional cigarette.

One of the most popular e-cigarettes is the Juul, which was specifically cited in the report. Teens are attracted to this device because it looks like an oversized computer flash drive and is easy to conceal. It also comes in flavorings that are attractive to teens. They are also highly addictive, with one Juul pod having the same nicotine amounts as one pack of cigarettes.

Federal alarm: Health officials, including the surgeon general and the U.S. Food and Drug Administration commissioner, Dr. Scott Gottlieb, have been sounding the alarm about this increased use of tobacco products among teens, and particularly the increased use of e-cigarettes, for months.

The surgeon general has called this issue an epidemic and the commissioner had cracked down on the e-cigarette industry, and has said he’s committed to reversing this epidemic.

Gottleib said in a news release, “These data are a sobering reminder of the rampant rise of youth e-cigarette use. I fear this trend will continue in 2019, forcing us to make some tough decisions about the regulatory status of e-cigarettes. We’ll continue to take a series of escalating regulatory actions to try to address the root causes of this spike in youth e-cigarette use, in particular by ensuring these products are sold in ways that make them less accessible and appealing to youth.”

In addition to more regulation, the report calls for proven strategies to decrease the use of tobacco, including: taxes to raise the price of tobacco products, smoke-free ordinances, hard-hitting media campaigns to warn about the dangers of tobacco use and restricting youth access to tobacco products.

State action: Kentucky lawmakers are trying once again to pass a law that would require all schools properties to be tobacco-free. At this time, only 74 of the state’s 173 districts have adopted 100 percent tobacco-free policies.

House Bill 11, sponsored by Rep. Kim Moser, R-Taylor Mill, has passed out of the House Health and Family Services Committee, of which she is the chair, and now awaits passage in the House. Sen. Ralph Alvarado, R-Winchester, has filed a companion bill, Senate Bill 27.

“Left unchecked, this massive increase will lead to tens of thousands of preventable deaths down the road for today’s kids, not to mention years of unnecessary suffering with debilitating tobacco-related disease,” Chandler said. “We applaud Rep. Kim Moser and Sen. Ralph Alvarado for introducing bills to make Kentucky school campuses 100 percent tobacco-free. We urge their colleagues to take this important step in preventing tobacco exposure at school. Tobacco stunts brain development, impairs learning and reduces impulse control. It has no place in our kids’ schools.”

Previous Article47 Ky. counties have syringe exchange programs, but only half of the 54 at high risk of HIV and hepatitis C outbreaks have them
Next ArticleTobacco-free schools bill hits a snag; prospects still appear favorable, but floor leader Carney says ‘Nothing is certain’