A bill to make all Kentucky school properties and events tobacco-free is in trouble in the state House, prompting advocates to mount a rescue effort.

Fifteen organizations took to social media and sent a letter to every representative asking for their support for House Bill 11, the statewide tobacco-free school bill, 15 groups, including the Kentucky School Boards Association,

“We respectfully urge the Kentucky House of Representatives to call HB 11 for a vote on the House floor as soon as possible,” says the letter. “Please do not sacrifice the health of all of our school children to the convenience of fewer than a quarter of Kentucky adults who use tobacco.”

The bill’s sponsor, Rep. Kim Moser, R-Taylor Mill, told Kentucky Health News in a telephone interview that she still has hope it will get called up for a vote and is still working toward that end, but couldn’t get any answers as to what was going on with it. She said she had heard it was going to be pulled from the House’s orders of the day.

That would be a death knell for the bill, which passed unanimously out of the committee Moser chairs on Feb. 7 and was put on the consent calendar, used to pass bills without debate. Then it was moved to the regular orders, a switch that required signatures of three lawmakers: Reps. Lynn Bechler, R-Marion; Myron Dossett, R-Pembroke; and Reginald Meeks, D-Louisville. Meeks said he was for the bill but wanted it to be debated.

Bonnie Hackbarth, vice-president for external affairs with the Foundation for a Healthy Kentucky, told Kentucky Health News that House Republican Caucus Chair Suzanne Miles of Owensboro is opposed to the bill. Moser said that she was not aware of that. Miles did not respond to a request for comment.

Opposition from one of the five leaders of the House’s Republican majority is a danger sign for the bill, which is already under attack through floor amendments.

Rep. R. Travis Brenda, R-Cartersville, a Rockcastle County teacher, filed an amendment to allow use of tobacco products if children were not present, an effort likely meant to appease some of the bill’s opponents. Moser promptly filed an amendment to clarify that the law, if passed, would prohibits smoking by all persons at all times on school properties, activities or trips.

Then Rep. Richard Heath, R-Mayfield, filed an amendment that would gut the bill and let local school boards make all decisions about tobacco use in their districts, as they already do. Rep. Lynn Bechler, R-Marion, filed an identical amendment the next day, Feb. 22.

Bechler who initiated the effort to move the bill from the consent calendar, told Kentucky Health News last week that he opposes the bill because it is government overreach. Rep. Myron Dossett, R-Pembroke, who also signed the petition, said likewise. He also spoke up for tobacco, noting that he represents Christian County, a large tobacco producer and home to a large smokeless-tobacco factory.

Moser noted that the opposition comes from members of her own party. “I think I have the votes in the House as a total to pass this,” she said, “but if they are worried about there being more Democrats than Republicans, at this point they might be right — and that’s kind of sad.” The House has 61 Republicans and 39 Democrats. 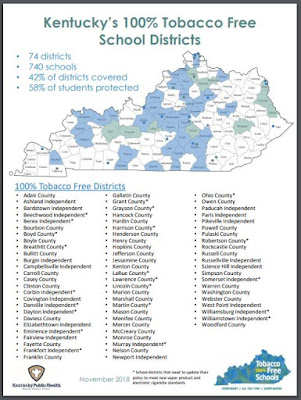 All the bill’s active opponents but Brenda are from Western Kentucky, which has fewer school districts with 100 percent tobacco-free school policies (but not as many as in Eastern Kentucky). Most of the schools in Miles’s district are already tobacco-free.

Overall, 74 of the state’s 173 districts have adopted such policies, covering 740 schools and 58 percent of the state’s students. Federal law only prohibits smoking inside schools that receive federal funding.

“It’s just too bad, too bad for Kentucky,” Moser said. “The whole thing is just beyond me as to why this is something that we can’t pass in Kentucky.”

Moser said Kentucky needs a statewide tobacco-free school law because of the “exploding rates of [youth] vaping and Juuling,” which she said leads to an addiction to nicotine “that is priming their brains for future addictions.” Further, she said it’s a great way to prevent Kentucky’s teens from becoming adult smokers, noting that 90 percent of adult smokers started smoking in their teens.

“People complain that we don’t do enough about prevention, and this is a prime example of something that is great that we can do — and they won’t do it,” she said.

The letter to the lawmakers also points to reasons to pass such a law: “House Bill 11, the tobacco-free schools bill, would create an environment where smoking cigarettes and e-cigarettes is not the norm, reduce youth tobacco initiation, provide positive adult role modeling, and protect students, faculty, and visitors from the harms of secondhand smoke and aerosol 24 hours a day, seven days a week.”

Health advocates have also taken to social media. On Twitter and Facebook, the Foundation for a Healthy Kentucky writes: Parents, teachers, health advocates, business leaders, students: Don’t allow #tobaccofreeschools bill to languish and die in the House. Urge your state representative to call HB11 for a floor vote today!

Hackbarth said the advocates are arguing that since the bill passed the House Health and Family Services Committee unanimously, and most Kentucky adults in a recent poll supported it, “It really deserves the right to be heard.”

The latest Kentucky Health Issues Poll, taken in September and October, found that 87 percent of Kentucky adults supported such a law. Polls since 2013 have found strong support for the policy.

“This is a short session and we cannot afford to wait any longer,” Moser said in the news release about the letter. “We won’t let this bill die quietly. Our constituents deserve to see a floor debate and vote on this important health legislation.”

The policy also has the support of the Kentucky Association of School Superintendents and the Coalition for a Smoke-free Tomorrow, a coalition of about 180 groups in the state.

Previous ArticleKy. officials rejected infectious-disease chief’s plea to move faster against hepatitis A outbreak, now nation’s largest and deadliest
Next ArticleReport on Medicaid pharmacy managers confirms they make a profit at the expense of pharmacies; calls for new payment model