When a rural hospital closes, it’s logical to assume that patients in its former service area will spend more time in ambulances getting to an emergency room farther away. A University of Kentuckystudy has figured out just how much more: “An estimated 11 additional minutes in an ambulance the year after a hospital closure in their ZIP code, a 76 percent increase compared to before the closure,” reports UK’s Rural and Underserved Health Research Center.

And it’s even worse for seniors: “The times increased from 13.9 minutes to 27.6 minutes, a 13.7-minute or 97.9 percent increase,” report researchers SuZanne Troske and Alison Davis. They noted that other studies have found that communities, rural and urban, where hospitals have closed “tended to have a higher percentage of elderly and poor residents.” 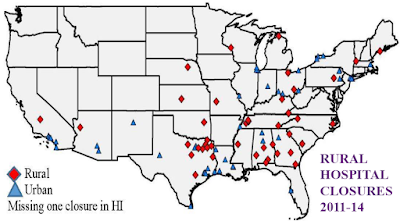 The study is based on data from 2011 through 2014, with 73,000 ambulance calls and about the same number of hospital closures inside and outside metropolitan areas. The researchers found no change in transportation times in metro areas. Most of the closed hospitals were the only ones in their ZIP codes, but those areas are smaller in metros. “When hospitals close, rural patients requiring ambulance services are disproportionately affected,” they write.

The researchers describe their methods: “Intuition suggests that patients are in an ambulance longer after the nearest hospital closes. However, no one has previously measured the travel time change. Our study is the first we are aware of that measures change in time in an ambulance based on reported ambulance trips.” They noted that the study “should not be used to draw conclusions about transport times for rural patients who may have relied on a closed hospital but do not reside in the zip code of that closed hospital.”

Addressing the implications for rural areas, Troske and Davis wrote, “More than half the hospitals in the country are located in rural areas and are the primary source of emergency medical services in these communities. When asked to rank attributes of rural health care facilities in a recent study, rural residents strongly valued access to emergency services through emergency departments s in their communities. . . . Access to emergency department services in communities, especially rural communities, persists as a priority for the Medicare program. In the 2017 annual report of the Medicare Payment Advisory Commission, the commissioners stressed the need to find more efficient and financially stable ways to deliver emergency services in rural communities. In the MedPAC report, they stated while there was reduced demand for inpatient hospital care, there was still need for emergency care among Medicare beneficiaries.”