Health advocates at a regulatory meeting about the state’s new Medicaid co-payment requirements said the new rule is riddled with problems, all of which they anticipated.

The co-payments, which range from $1 for some prescriptions to $50 for any type of inpatient service, went into effect Jan. 1 for most adult Medicaid recipients in Kentucky. 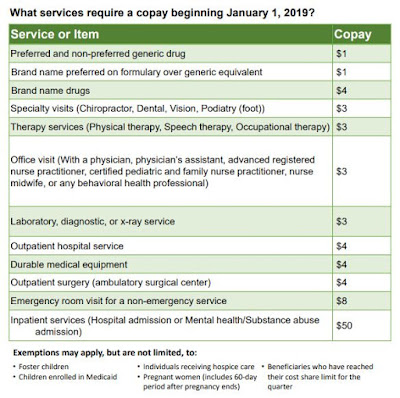 Jason Dunn, a policy analyst for Kentucky Voices for Health, said the coalition of organizations strongly opposes the co-pays, and reiterated many of the points made in a Dec. 11 letter to the Medicaid commissioner asking the state to reconsider implementing the program. The letter was signed by 26 groups.

Dunn said research shows that even small co-pays cause many low-income people to go without care, especially when they need ongoing care or multiple medications.

“The unintended consequences of creating barriers to care are too often offset by increased cost and more expensive care down the road,” Dunn said. “In short, this is not a best practice and for that reason we are opposed to mandatory co-pays for Medicaid beneficiaries.”

Pikeville dentist Bill Collins, a former president of the Kentucky Dental Association, opposed co-pays in written comments that were read at the meeting. He said his offices don’t collect them, largely because of the administrative burden.

“Some of my peers have collected and had to reimburse the patient,” he wrote. “This is not a simple task; bookkeeping is initiated, and costs are then upon the provider; the $3 co-pay then becomes a $5 to $10 return. The bookkeeping is a nightmare.”

He added, “We as providers want to treat our patients, but no one, not even government can constantly lose revenue and stay in business. We feel with noncollectable copays, additional difficult administrative tasks, and the unknown of “my rewards dollars” make it difficult to accept.”

The new co-pays are separate from the state’s new Medicaid plan, called Kentucky HEALTH, which is set to roll out April 1, unless a court orders otherwise. When that plan begins, monthly premiums ranging from $1 to $15 per month will replace the co-pays for most beneficiaries. The plan will also require beneficiaries to earn “virtual dollars” to pay for vision and dental care, rather than getting the benefits as part of their basic package.

KVH also submitted comments it had collected from a survey about the mandatory co-payments. One respondent wrote, “We have chosen to get food and pay bills over medications and considering we both have health issues, including diabetes, this is making things rough.”

Another wrote, “As I have 10 prescriptions I must fill each month, and most are not generically available, I am concerned about meeting my monthly bills since my co-pay will probably be around $30 monthly. I am already relying on a food bank to eat. I am elderly and disabled and cannot work.”

Emily Beauregard, executive director of KVH, said the survey of 140 people found that 90 percent of them opposed the copays. The survey respondents included 23 Medicaid providers and 90 Medicaid beneficiaries, family members of beneficiaries, and others.

Beauregard said 21 of the respondents reported they couldn’t fill prescriptions because they couldn’t afford the co-pay, 30 said they were avoiding or delaying care, and many expressed concerns about rationing their care or having to make trade-offs between paying their bills.

Beauregard also gave several examples of people who were denied care because they couldn’t afford a co-pay, but shouldn’t have been because they were below the federal poverty level. A state regulation requires providers to see or treat such people even if they can’t afford the co-pay.

“It’s important to understand that in practice sometimes the safeguards we write into policies aren’t always adhered to in practice,” Beauregard said. “Providers may not understand them, their staff might not be aware or trained properly or they may simply may not be following the practice.”

Is the Cabinet for Health and Family Services or its Department for Medicaid Services hearing about any of these issues from Medicaid providers and beneficiaries? Asked that question via email, cabinet spokesman Doug Hogan replied by saying that 39 other states have some sort of cost-sharing in Medicaid and it’s important for beneficiaries to “plan for their health care visits and prepare to pay the minimum co-pay we require.”

Hogan added that there are financial-planning resources, such as community-based advocacy groups, available to help Medicaid beneficiaries become better prepared to pay the “very minimal co-pay.”

He said, “Kentucky taxpayers are spending thousands of dollars to fund health-care services for our recipients. Asking our recipients to pay co-pays that are, in most instances, $1 to $3, is a reasonable request for that healthcare that is worth thousands — and it helps prepare them for commercial market coverage in the event they move into that market.”

The state has until March 15 to respond to the public comments.

Previous ArticleBill to raise legal age to buy tobacco products to 21 fails on 4-6 committee vote; bill’s effectiveness questioned, called ‘PR move’
Next ArticleGuthrie tries to preserve funding for Medicaid program that gets beneficiaries out of facilities and into community-based support