Most Kentucky adults are involved in some community activity, broadly defined, but the state ranks below average, 36th, in the latest state-by-state ranking of volunteerism.

“Volunteering can improve a community’s health and build connections between neighbors,” says the Foundation for a Healthy Kentucky. “To learn more about volunteering and civic participation in the commonwealth, the 2018 Kentucky Health Issues Poll asked Kentucky adults whether they engaged in a variety of civic activities in the prior year. Seven of these activities were related to political engagement and three were related to community participation.”

The poll found that 78 percent of Kentucky adults are involved in civic activities of some kind from volunteer work to talking about politics, and 68 percent are engaged in politics in some way, including an in-person discussion about politics and government. It found that 54 percent were active in their communities through volunteering at their church or other nonprofit group, working on a community project or donating blood.
“Getting involved can actually be a prescription for improving individual health as well as the health of our communities,” said Ben Chandler, president and CEO of the foundation. “It’s that ‘helper’s high’ that occurs when we’re contributing with no expectation of getting paid. Studies show this sense of purpose leads to lower mortality rates, reduced depression and better functionality.” 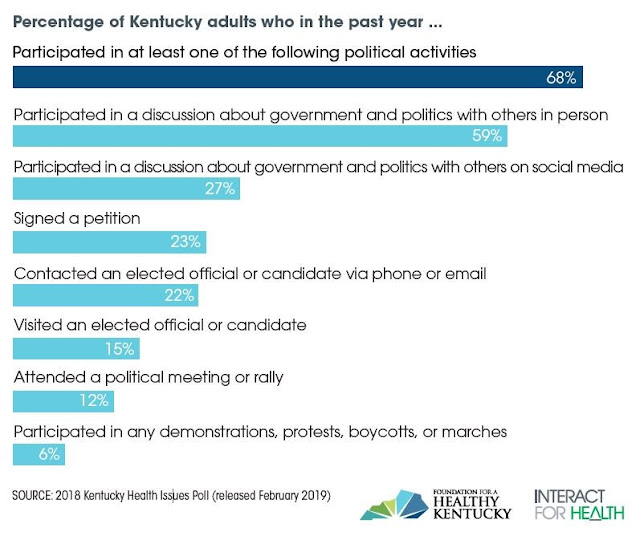 In the latest ratings by the Corporation for National and Volunteer Service, which use narrower definitions than the Kentucky poll, only 23.5 percent of Kentuckians were considered volunteers. The state’s volunteer rate has been declining since 2005, when it was above the national average.

KHIP is an annual telephone poll of Kentucky adults about health and health-policy issues; it is funded jointly by the Foundation for a Healthy Kentucky and Interact for Health, a Cincinnati-area foundation.
Previous ArticleAmbulance runs for rural patients are 76% longer when their hospital closes, and for seniors, it’s 98% longer, study finds
Next ArticleSurge by a stronger strain of the flu is another warning that the season for the disease is not over; shots still available and useful