Health advocates rallied at the state Capitol Feb. 28 to ask
legislators to bring the tobacco-free school bill up for a vote,
saying it has the votes to pass. (Photos by Melissa Patrick)
—

With just days left in the legislative session, the bill to ban use of tobacco at all schools and their events is on life support. But there may be new life in a bill that would raise the legal age for buying electronic cigarettes from 18 to 21.

About 50 health advocates gathered at the Capitol Feb. 28 for what they called a last-ditch effort to get a statewide tobacco-free schools law. The idea has widespread public support, and House Bill 11 has a Republican sponsor, but it has run into trouble with Republicans who run the House.

“It is time to tell our legislators, ‘Free our bill. Bring it to the floor and have our legislators vote on it. Up or down. Let’s get it done before this session ends,'” American Lung Association Advocacy Director Shannon Baker said at the rally.

“What we have is leadership holding it and not calling it up to the floor for a vote. . . . We know we have the votes, it will pass, but they won’t even let them vote,” said Bonnie Hackbarth, vice-president for external affairs with the Foundation for a Healthy Kentucky, while passing out stickers and posters that said “HB 11 / Let the House Vote.”

This effort followed a letter to every legislator from 15 groups, including the Kentucky School Boards Association, pushing the bill. But it has been stuck on the House calendar since Feb. 11, and time is running out to get it to the Senate, which passed a similar bill in a previous session.

House Majority Floor Leader Bam Carney, R-Campbellsville, told Kentucky Health News that with five regular bill-passing days left in the session, it is too early to call the measure dead. “Anything is still possible this session,” he said.

The bill’s sponsor, Rep. Kim Moser, R-Taylor Mill, said that while her bill wasn’t dead, she was “trying to keep it on life support.”

Moser has said the obstacle may be that the bill has more votes among the House’s 39 Democrats than among its 61 Republicans, or lacks a majority of the Republicans. Carney, asked if he calls bills only if they have support from most Republicans, said: “I wouldn’t say that’s a policy, but anytime you want to move a piece of legislation, you would want to have a unified caucus as much as possible and again, on this particular issue, the local control issue is the part that’s being discussed.”

Carney said Republican leaders were still trying “to get some more unity on it in our caucus.” He added, “I think in concept, everybody agrees with it. Some members side with local control, others want it statewide.” 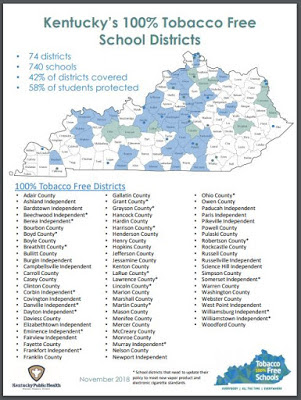 Several floor amendments have been filed on Moser’s bill, including two that would put school boards in charge of all tobacco-related decisions, as is already the case.

The key amendment was filed by Rep. R. Travis Brenda, R-Cartersville. It would allow adults to use tobacco products on school property when students are not present.

In response, Moser filed an amendment, written and approved by the school boards’ group and the foundation, that would only allow adults to use tobacco products on field trips if students are not present.

“It says smoking or tobacco use is still prohibited even on class trips for students,” Moser said, “but if adults are along and they are not in the presence of students we are not going to tell you what to do.”

Brenda said Moser’s amendment doesn’t go far enough to address concerns of officials in the Rockcastle County Schools, where he teaches, about enforcing the ban against employees when students aren’t present. Nor, he said, does it go far enough to appease many lawmakers’ concerns around government overreach.

Brenda said he does not use tobacco products and has a father with a cancer caused by long-term tobacco use. He said it’s important to protect students from tobacco, but it’s also important to allow adults, out of the presence of students, to be able to make those decisions for themselves.

“I’ve heard from some that this is a reasonable compromise,” he said.

Moser disagreed, and said her amendment was written to appease lawmakers’ concerns about adults not being able to use tobacco products during off-campus events. “This is about the kids,” she said. “We’re not trying to limit anyone’s personal liberties.”

At the rally,  Moser said getting the bill passed has been a “heavy lift” even though “at face value” tobacco companies have said they have no intention of marketing their products to children and have been “pretty neutral” on it.

“We have a lot of tobacco farmers here in Kentucky, and so there is still a lot of misgivings about limiting any sort of tobacco,” she said. “We are working on educating folks so hopefully we can get some movement.”

Fewer than 4,000 tobacco farmers remain in Kentucky, but the state has a strong tobacco heritage, and that was made loud and clear Feb. 25 at the Senate Agriculture Committee, which vote 4-6 against a bill to raise the legal age to buy tobacco products and e-cigarettes from 18 to 21.

Meredith and Sen. Paul Hornback, R-Shelbyville, the committee chair, have since filed floor amendments to another bill. The amendments would raise the legal age to buy electronic cigarettes in Kentucky to 21. Anyone 18 and older would still be able to purchase other tobacco products.

The amendments were filed to Senate Bill 218, sponsored by Sen. Brandon Smith, R-Hazard, which would create an anonymous hotline or electronic system for students to report concerns about the distribution and use of e-cigarettes or other tobacco products on school property or at school events. It also includes an educational component and guidelines for how to handle the reporting.

Smith’s bill passed unanimously out of the Senate Health and Welfare Committee after a group of students from Johnson County Middle School told lawmakers that the nicotine addiction caused by e-cigarettes is so bad in their school that many students have to go to the bathroom every two hours to vape and that others are bullied for speaking out against it. One pod for the most popular e-cigarette among teens, made by Juul Labs, has as much nicotine as a pack of cigarettes.

After the students spoke, Meredith announced his plan for a floor amendment to ban sales of e-cigs to those under 21. “If you can’t get the whole pie I’ll settle for half the pie,” he said. “This is a good start.”

But some health advocates disagree. A press release from the health foundation listed eight organizations that want to revive Meredith’s original bill to raise the legal age to purchase all tobacco products to 21. They also seek modifications to the bill, including one to remove the penalties for young buyers, which they say have not proven to be effective in curbing use.

Health advocates look at the hangup with tobacco bills and wonder about the influence of Altria Group, parent of Philip Morris, which sent a vice president to Frankfort to get the “Tobacco 21” bill passed.

It is unclear what Altria might think of Meredith’s amendment to raise the legal age for buying e-cigarettes. Altria is buying a 35 percent of Juul Labs, regularly reports spending more money than any other lobbying interest at the legislature, and in October gave $100,000 to the state Republican Party’s building fund.

Ben Chandler, president and CEO of the foundation, told WKU Public Radio that “the tobacco companies have outsized influence in Frankfort still.” He told Kentucky Health News that the influence of the tobacco lobby on the tobacco-free school bill remains uncertain.

“We don’t know what the tobacco companies are doing and what they are behind,” he said. “We think that one of the impediments is that the members don’t want to vote for more than one tobacco bill.”

Kentucky Health News is an independent news service of the Institute for Rural Journalism and Community Issues, based in the School of Journalism and Media at the University of Kentucky, with support from the Foundation for a Healthy Kentucky.