Forty-nine percent of Kentucky adults continue to favor programs that allow people who use intravenous drugs to exchange used needles or syringes for sterile ones, while about 40 percent oppose such programs, according to the latest Kentucky Health Issues Poll.

Kentuckians with more education, those who live in urban areas, and those aged 18 to 29 are most likely to favor needle or syringe exchanges. Generally, the more familiar they are with the exchanges, the more likely they are to support them as a strategy to reduce the transmission of HIV, hepatitis C and other viruses. 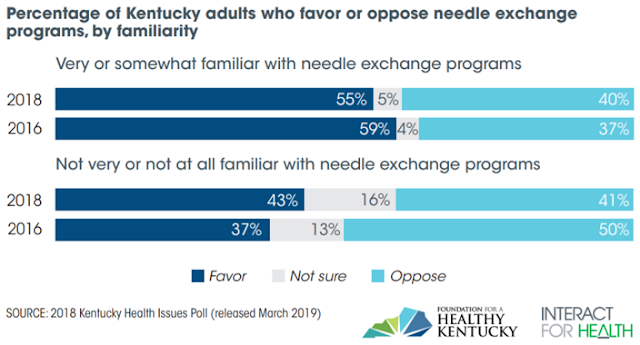 Among Kentuckians who said they were not very familiar, or not at all familiar, with the exchanges, support for them has increased since 2016, to the point that they are about evenly divided on the issue. Support may have decreased slightly among those with more familiarity, but the shift in those numbers was within the poll’s margin of error for each number, 2.5 percentage points.

The Foundation for a Healthy Kentucky, which co-sponsors the poll, said in a press release that the stigma of drug use and addiction generates opposition to needle or syringe exchanges. That has occurred most often among county fiscal courts, whose approval is required for an exchange to open in a county. Approval is also required by the county health board and the council or commission of the city where the exchange is located.

“Needle exchange programs are about community safety and connecting people to treatment,” said Ben Chandler, the foundation’s president and CEO. “They don’t lead to higher drug use, and they don’t lead to more crime in the communities where they’re located. We can’t let false perceptions stand in the way of a proven strategy to help deal with Kentucky’s opioid and meth crises.”

The federal Centers for Disease Control and Prevention has identified 54 Kentucky counties most at risk from an outbreak of HIV or hepatitis C from intravenous drug use and dirty needles. Only 27 of those counties have syringe exchanges.

The state Department for Public Health website has information about the exchange programs.

“More than 50 needle exchange programs are operating in Kentucky, helping to reduce the chances of hepatitis C or HIV outbreaks that can put everyone in a community at risk,” said Dr. Brent Wright, associate dean for rural health innovation at the University of Louisville. “These programs also remove dangerous used needles from the community, and can give participants access to vaccinations, substance-use-disorder treatment, overdose-prevention information and disease screening.”

Wright was quoted in a press release from the foundation, which co-sponsors the poll with Interact for Health, a Cincinnati-area foundation. He is treasurer of the Kentucky foundation’s board of directors.

Previous ArticleHouse sends tobacco-free schools bill to Senate with three days left in session, minimum needed for passage; backers have hope
Next ArticleTobacco-free-schools bill, hotline to report use of electronic cigarettes in schools are on track to pass before end of session