A new report shows that Kentucky continues to be one of the worst states in which to grow old, which isn’t great news for the one in six Kentuckians who are already over the age of 65 and the growing number of Baby Boomers who will soon fall into that category.

Kentucky ranks 49th for seniors’ health in the most recent America’s Health Rankings Report, down one slot from last year. Mississippi is the only state ranked worse. Kentucky has been in the bottom 10 states for senior health since 2013, the first year AHR did the report.

The report looked at 34 measures of senior health that are known to influence health, which were then broken into five categories.

Kentucky ranked in the bottom 10 states in four of the five main categories, 49th for behaviors; 47th for community and environment; 44th for clinical care; and 50th for health outcomes.

Its highest ranking was for senior health policies, 32nd. This ranking was largely driven by positive scores in two categories, one that shows Kentucky has a low percentage of seniors living in nursing homes who require a low level of care, 7.4%; and another that shows the state has a high percentage of seniors with prescription drug coverage, 87%.

Other good news is that only 5.5% of Kentucky seniors are heavy drinkers, though it was 4% three years ago. The state also has a high percentage of seniors who are managing their diabetes, 81.6%.

This year, the report also looked at how many seniors had avoided care due to cost. It found that in Kentucky, 7% of seniors said there was a time in the past year when they needed to see a doctor, but could not because of cost. Nationally, that rate was 5.2%.

It also took a national look at young seniors, between the ages of 65 and 74, and found that compared with 15 years ago, smoking rates are 16% lower, early deaths are 22% lower and those reporting they are in better health is 11% higher. However, the report also found excessive drinking in this age-group is 42% higher, obesity is 36% higher, diabetes is 36% higher and suicide rates are 16% higher.

The report says its purpose is to promote data-driven discussions that can drive positive changes and improve the health of seniors — and most of Kentucky’s data shows a lot of room for improvement.

Kentucky seniors rank No. 2 in smoking, at 12.5%. The report notes that it’s never too late to stop smoking, and that even in older adults it has been shown to improve health outcomes.

Kentucky also ranks in the bottom five states for several other measures.

It ranks 47th for physical inactivity, with 36% of the state’s seniors reporting they were inactive. Overall, the report found that females are 1.2 times more likely than males to be inactive.

It also ranks 47th for community support expenditures, which are used for funding personal care, meals, transportation and nutrition-education programs for seniors, at $225 dollars per adult aged 60 and older in poverty, compared with the average of $571 dollars for all states.

Kentucky ranked 46th for home-delivered meals to seniors, delivering meals to only 4.9% of its seniors aged 60 and older who have difficulty living independently. The national average for this measure is 8.9%, and the top ranked state for this measure, New Hampshire, delivers meals to 37.5% of seniors in need.

Kentucky ranks as the worst state for its high number of preventable hospitalizations, at 76.6 discharges per 1,000 Medicare enrollees. The national average for this measure is 49.4.

Kentucky seniors also suffer from more mental distress than seniors in other states, 10%, compared to 7.9% nationwide.

The state’s seniors also rank last among states for volunteerism by seniors, with only 18.9% volunteering, and nearly last, 48th, for the number of seniors reporting high health status, 31.7%. The national average for these measures are 28% and 41.3% respectively. 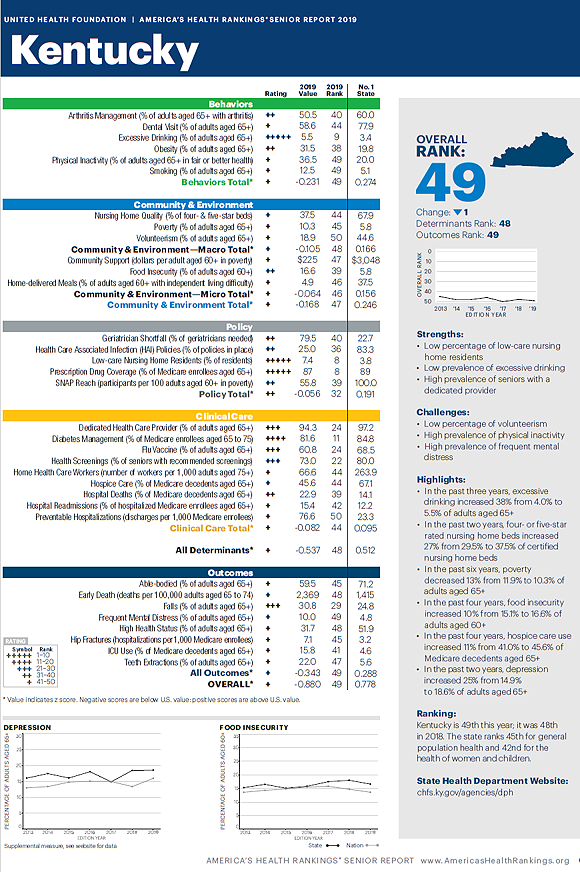 Previous ArticleChronic disease can lead to mental-health issues, especially among seniors in isolated rural areas like Casey County
Next ArticleHealth cabinet says it will revise proposed rule that would have banned tattooing over scars, due to ‘unintended consequences’