Top three tick posters from a contest held by the Kentucky Department of Public Health and Northern Kentucky Health Department, which attracted more than 700 entries (Click on it for a larger version.)
—–

Ticks and summertime go hand-in-glove, but that doesn’t mean you can’t enjoy outdoor summer activities; you just have to take extra precautions. Tick season in Kentucky runs through August.

“Spring and early summer are peak times for tick bites, which coincide with people venturing outdoors in the warmer weather,” Dr. Jeff D. Howard, commissioner of the state Department for Public Health, said in a news release. “It’s important that people take preventive measures against tick bites and also check for ticks after visiting affected areas.”

Ticks are most likely to be hanging out in wooded areas; the boundaries between woods and fields; low-hanging tree limbs; under leaves, plants and ground cover; and around stone walls and woodpiles that are home to mice and other small mammals that carry ticks.

The health department recommends that Kentuckians remember four steps when it comes to protecting themselves from ticks: Protect; Check; Remove; and Watch.

Protect: To protect yourself from tick bites, avoid tick-prone areas, but if you are going to be in those areas use a tick repellent that has 20 percent DEET, picardin, IR3535 or lemon eucalyptus. Wear light-colored, long-sleeved shirts and pants tucked into socks. Use permethrin-based clothing sprays, unless you have cats, to which permethrin is toxic.

Check: After you’ve spent time outdoors, do a head-to-toe check for ticks using a hand-held or full-length mirror. Parents should check children. Common places to find ticks are behind the knees, around the waist, under arms, and on the neck and head. It is also important to check your gear and pets for ticks. If possible, change your clothes and shower after going outdoors. To kill ticks on dry clothes, put them in a dryer on high heat for 10 minutes. If clothes require washing, use hot water.

Remove: Remove an embedded tick as soon as possible by grasping it as close to the skin as possible with tweezers and pulling straight out with gentle, even pressure. Do not jerk or twist the tick. Wash your hands with soap and water after the tick is removed. Apply an antiseptic to the bite site. Do not use alcohol, matches, liquid soap or petroleum jelly to remove a tick. Dispose of the tick by submerging it in alcohol, placing it in a sealed bag or container, wrapping it tightly in tape, or flushing it down the toilet. Never crush a tick with your fingers. Don’t delay; remove a tick as soon as it is detected, because the longer it is attached, the higher the risk that it may transmit disease.

Watch: Watch for symptoms of tick-borne illness, including sudden fever and rash, severe headache, muscle or joint aches, nausea, vomiting, and diarrhea. Symptoms can arise within several weeks of removing a tick. Contact your health-care provider if symptoms occur.

Tick types and diseases in Kentucky

Overall, the incidences of tick-borne disease remains low in Kentucky, but that doesn’t mean you shouldn’t take precautions to protect yourself. 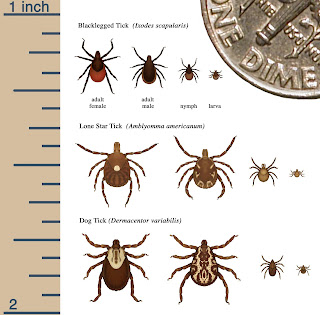 The lone star tick and the American dog tick are the most common ticks in Kentucky. And though bites from these ticks typically just cause local irritation and itching, a small percentage of them carry disease.

In particular, the adult female lone star tick, which has a white spot on its back and is about the size of a pencil eraser, can carry erlichiosis, a disease that can cause fever, headache, chills, muscle pain and in some cases a rash. Symptoms generally occur within one to two weeks of a bite. The first line of treatment is an antibiotic; if not treated properly, it can be fatal.

The CDC reports that Kentucky has one of the highest rates for cases of this disease, 9.7 per 1 million people. The lone star tick can also cause some people to become allergic to red meat.

The American dog tick is reddish-brown with mottled white markings on the back and is about the size of a pencil eraser. It can carry Rocky Mountain spotted fever, which usually begins with a sudden onset of fever and headache two to 14 days after being bitten by an infected tick.

Kentucky had 249 probable cases of Rocky Mountain spotted fever and one confirmed case in 2017, according to the state health department. Though rare, the bacterial disease can be deadly if not treated with the right antibiotics, with children under 10 making up most of the deaths, the CDC says.

Earlier this month, a 2-year-old Kentucky boy came down with a case of Rocky Mountain spotted fever that caused him to be unconscious for nearly a week, Lindsey Bever reports for The Washington Post. Kayla Oblisk told Bever that her son, Jackson, was bitten by a tick and they had just pulled it off and thrown it away without much worry. Within three days, he developed a dangerous high fever and developed a light pink rash all over his body. She said he was first diagnosed with a viral infection, but was eventually admitted to the hospital where he was diagnosed and treated for this rare but potentially fatal disease.

Both the American dog tick and the lone star tick can carry tularemia, a disease that infects animals and people and is often spread by rabbits. Symptoms of tularemia vary depending on how long the bacteria have been in the body and where the person contracted the disease. All forms of the disease are accompanied by fever. It can be life-threatening, but most infections can be treated successfully with antibiotics. In 2017, Kentucky had two cases of tularemia, according to the CDC.

A much smaller tick that is becoming more common in Kentucky is the blacklegged tick, also known as the deer tick. It carries Lyme disease, symptoms of which can range from mild to severe, including fever, headache, fatigue and a skin rash that looks like a bull’s-eye, although not everyone gets the rash. This tick can also carry ehrilichiosis, which can weaken the immune system.

In 2017, Kentucky had six confirmed cases of Lyme disease and 14 probable cases, the CDC says.

Veterinarians in Kentucky now have access to a new program sponsored by the health department and the University of Kentucky that allows them to submit ticks for identification and testing. For more information about the program contact the program manager at tori.amburgey@ky.gov or the state public health veterinarian: kelly.giesbrecht@ky.gov.

Elemental, a Medium publication for health-and-wellness journalism supported by science, has produced a multi-part special report about ticks called “Tickpocalypse” that explores in great detail the exploding tick population and the growing number of diseases that come with it. 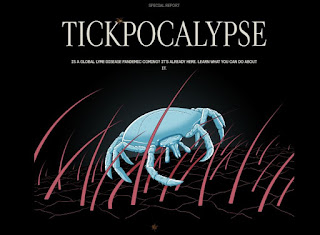 The introduction to the series alarmingly refers to Lyme disease as a pandemic, a word that is only assigned to diseases that occur over a wide geographic area and affects an exceptionally high proportion of the population.

“It’s estimated that 300,000 people contract Lyme each year in the U.S.,” with victims found in all 50 states and Washington, D.C., it says. Further, it notes that Lyme is also on the rise in Europe, Africa and Asia.

Lyme disease is so bad that Mary Beth Pfeiffer, author of Lyme: The First Epidemic of Climate Change, calls for a “huge national and concerted international effort to bring it under control,” Alex Bhattachari reports in one of the stories, “Lyme Disease Cases Are Exploding. And It’s Only Going to Get Worse.”

Bhattachari writes, “A public health crisis is hiding in plain sight, with tick-borne diseases creating millions of sick people at an economic cost running into the billions, and little has been done so far to mount a meaningful defense.”