The tax hike made cigarettes noticeably more expensive in Kentucky than in Indiana and Tennessee, and narrowed price differentials with Ohio and West Virginia; that may have reduced Kentucky sales.
—–

The year after Kentucky increased its cigarette tax by 50 cents, to $1.10 per pack, 36 million fewer packs were sold in the state. That was a decrease of about 10 percent, more than the national decline of 6.1%.

That’s a “big deal.” said Ben Chandler, president and CEO of the Foundation for a Healthy Kentucky, which lobbied for the tax increase and is now pushing for a tax on electronic cigarettes.

“It is pretty clear to us that a lot of these packs of cigarettes were not purchased as a result of the rise of the cigarette tax,” Chandler said. “You can never completely prove it, but the fact that we had such a decrease . . . the size of the decrease was unusual right after the cigarette tax went into effect.”

Chandler called those results “pretty good data that would suggest that the price increase does affect people’s behavior.”

Some critics of cigarette-tax increases argue that governments shouldn’t rely on revenue sources that are declining. Chandler said that any loss in revenue from fewer tobacco sales will result in a significant long-term savings to the state’s health budget. He said the state Medicaid program pays $600 million a year in smoking-related costs.

Chandler said he thought a proposed tax on electronic cigarettes would have a similar effect on teenagers’ use of the products.

“I think particularly among young people, the tax will have a profound effect,” he said. “One thing this information shows you is that when you raise the price, consumption does go down. And we believe that the people who are more likely to be susceptible to a price increase are kids because they don’t have a whole lot of disposable income.

Kentucky lawmakers have pre-filed legislation (Bill Request 32) for the 2020 legislative session to tax electronic cigarettes like other tobacco products, as a way to curb surging youth use of the devices.

Use of e-cigarettes nearly doubled among Kentucky youth from 2016 to 2018, with more than one in four high-school seniors reporting last year they they had used e-cigs, and experts say that is part of a national epidemic.

In its 2014 report, “The Health Consequences of Smoking: 50 Years of Progress,” the surgeon general said increasing prices is “one of the most powerful tobacco control interventions” because price hikes are proven to reduce smoking, especially among teenagers.

An e-cigarette tax was in the 2018 bill that raised the cigarette tax, but was removed in the Senate, just before final passage and after lobbying by Altria Group, the largest tobacco company and 35% owner of Juul Labs, the largest e-cig company. Altria outspent all other lobbying interests in the 2018 legislative session, spending about $380,000 to influence legislators.

Between Jan. 1 and April 30 of this year, Juul Labs has spent around $43,000 for lobbying the General Assembly, according to a report from the Kentucky Legislative Ethics Commission.

Stateline reports that 17 states and the District of Columbia have specific taxes on e-cigarette products, with half of those taxes implemented in 2019, according to the Public Health Law Center at the Mitchell Hamline School of Law in St. Paul, Minnesota. 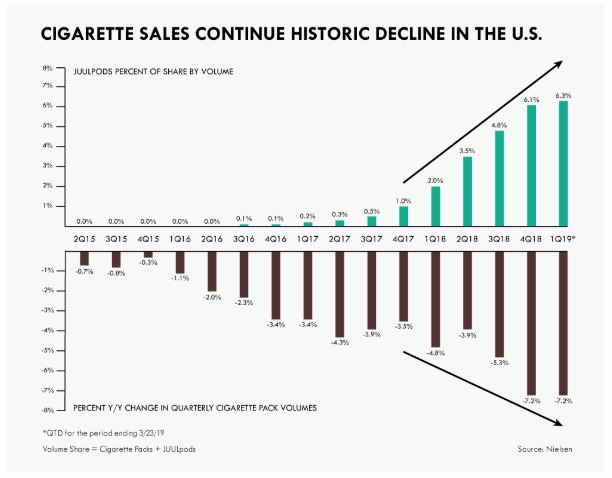 “These changes in the U.S. tobacco market are a testament to the success of Juul products in switching adult smokers off combustible cigarettes,” Juul CEO Kevin Burns said in the report.

Chandler pushed back on that assertion, saying that research does not show that adults who switch to an e-cigarette product are more likely to quit — and that it also shows that those who use e-cigarettes often use both products. He added that the U.S. Food and Drug Administration has not approved e-cigarettes as a smoking cessation device.

“I don’t buy into the notion that Juul suggests, that the e-cigarettes have been central in cutting down smoking,” Chandler said. “What I see is young people taking up e-cigarettes who would have never smoked otherwise.”

Previous ArticleStudy finds it takes longer than previously thought for a heavy smokers’ risk of heart disease to be the same as a non-smoker
Next Article86 percent of Kentucky’s school districts have already adopted tobacco-free polices, ahead of state law with opt-out provision