Kentucky adults just keep getting larger, reaching an all-time high for the number of obese adults in the state, ranking it fifth in the nation.

“As a society, as a whole, we’re not quite convinced yet what a major problem this is,” said Dr. Barbara Fleming-Phillips, an internist who helps run the weight management clinic at UK Healthcare‘s Barnstable Brown Diabetes Center.

Kentucky’s adult obesity rate in 2018 was 36.6 percent, according to an annual report by Trust for America’s Health and the Robert Wood Johnson Foundation. That’s an increase of 6.7% , and 2.3 percentage points, from last year’s rate of 34.3%, eighth highest in the nation. 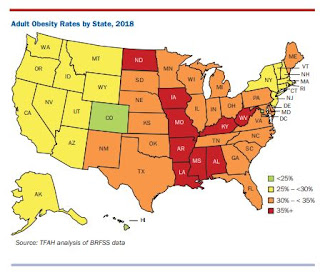 The report says Mississippi and West Virginia have the highest rates of adult obesity, at 39.5%, and Colorado the lowest at 23%.

That said, all the state rates could actually be higher, says the report, since their numbers are based on the Behavioral Risk Factor Surveillance System, a continuous national poll; people self-report, and tend to over-report their height and under-report their weight. Obesity is calculated through body mass index, essentially a ratio of height to weight.

Supporting that theory, the national adult obesity rate is 39.6%, which comes from actual body measurements from the National Health and Nutrition Examination Survey.

The report for Kentucky shows that 68.5% adults in the state are either obese or overweight.

“Clearly things are going in the wrong direction in Kentucky just as they are in the rest of the country,” said Fleming-Phillips. “And it’s really a systemic, overall-society problem; it’s not just a matter of counseling individual people on weight loss, which we do with my job, but it’s a matter of looking at the entire system.”

Fleming-Phillips said it will take a “multi-pronged approach” to tackle excessive weight in Kentucky and the nation. She said that from her clinical experience, the most important contributor to weight loss is the diet, but added that exercise is definitely a component.

As for exercise, she said because we are such a sedentary society with sedentary jobs, exercise must become a habit early on in a person’s life; otherwise they will have to decide it is important.

Kentuckians don’t exercise much. The report says Kentucky ranks No. 1 in the share of adults who say they are physically inactive: 32.3%.

The state also recognizes the need to focus its obesity efforts on children. That’s because a child who is overweight when they start kindergarten is three times as likely to become obese by middle school compared to their peers, Christina Dettman, spokeswoman for the Cabinet for Health and Family Services, said in an e-mail.

For example, she said the State Physical Activity and Nutrition Program works to increase breastfeeding in birthing facilities, since studies show children who have been breast-fed are less likely to be obese. The program also works to implement healthy-food guidelines in work and community settings; to integrate nutrition and physical-activity standards into early-care and education systems; and to improve sidewalks, paths and bicycle routes throughout the state.

Dettman added that Kentucky has received a federal grant that can be used for evidence-based strategies at the local level to improve nutrition and physical activity. It will be allocated to 11 community health departments in Eastern and Western Kentucky. They include health departments in the Purchase District, Pennyrile District, Kentucky River District, the Cumberland Valley District, and Muhlenberg, Todd, Calloway, Christian, Pike, Floyd and Whitley counties. According to the Centers for Disease Control and Prevention, the grant is for $856,326.

The report notes that obesity levels are closely tied to social and economic conditions, finding that those with lower incomes are at higher risk of being obese as are people of color. The report includes 31 recommendations for policy actions that are largely designed to improve access to nutritious foods, provide safe places for physical activity and to minimize the harmful marketing and advertising tactics that currently exist.

A few examples of its recommendations include the expansion of the Special Supplemental Nutrition Program for Women, Infants and Children to age 6 for children and for two years after birth for mothers, fully funding the WIC Breastfeeding Peer Counseling Program and taxing sugary drinks.

The push to expand WIC services is supported by an obesity decline seen in 31 states among 2- to 4- year-olds enrolled in the program between 2010 and 2014. Kentucky, with a decline of 18.2% to 13.3% respectively, was one of those states.

That said, Kentucky’s older children haven’t fared so well, with those between the ages of 10 and 17 having the third highest obesity rate in the nation, at 19.3%. And just like the state’s adults, obesity rates among Kentucky’s high school students continues to creep up and at 20.2% this group also ranks third in the nation for this measure.

The latest Kentucky Health Issues Poll that asked about childhood obesity found that 56% of Kentucky adults saw childhood obesity as a serious problem for the state; another 35% said it was a problem, but not serious; and 6% saw it as no problem at all.

The American Medical Association recognized obesity as a disease in 2013, with hopes that the designation would change the way the medical community treats obesity, including how insurance companies would pay for the treatment.

But that has not happened, Fleming-Phillips said. Dedication to nutritional education and obesity prevention is still not a priority “anywhere in the medical system,” she said.

The report also addresses coverage for obesity prevention, saying that while the law requires most insurance plans to cover preventive services, “there is great variability of actual implementation or uptake of these recommendations across insurers.”

Being overweight or obese greatly increases the risk of developing other chronic diseases, like type 2 diabetes, high blood pressure, heart disease, stroke, and many types of cancer — all conditions that plague Kentucky. Obesity is estimated to increase national healthcare spending by $149 billion annually, says the release.

About 14% of Kentucky’s adults reported having diabetes, ranking the state seventh highest for this measure, and 39% of them reported having high blood pressure,which put the state at No. 5, the same rank it has for adult obesity.