Donna Arnett, dean of the University of Kentucky College of Public Health, in an e-mail called death rates the most “comprehensive, inclusive” measure of overall health status.

It’s no secret that Kentucky struggles in just about every area of health, ranking 49th in senior health and 45th in adult health, according to the latest America’s Health Ranking Report. And even in areas where the state has made some progress, such as cancer screening, outcomes are still pretty dismal. So it should come as no surprise that the state ranks high in death rates.

Using 2017 data, the Centers for Disease Control and Prevention study compared the average age-adjusted death rates by sex, race and ethnicity, as well as the five leading causes of death between each group of states. Age specific death rates were given as well. 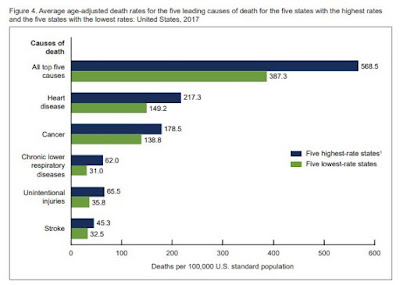