The number of new cases of influenza dropped slightly in Kentucky during the second week of February, but 16 more adults in the state were reported to have died from the flu. So far, 66 Kentuckians have died from it this season, four under the age of 18, according to the state Department for Public Health.

The latest weekly report shows that in the week ending Feb. 15, Kentucky counted 1,854 new cases, a slight decrease from the 2,101 new cases reported the previous week. During this flu season, 19,057 cases have been reported in Kentucky. The actual number of cases is higher, because not all flu cases are counted; flu does not have to be reported, and four counties did not contribute to the latest report. 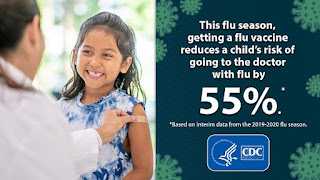 This flu season has been especially bad for children across the nation. In Kentucky, children between 1 and 10 have been hardest hit. That said, a preliminary Centers for Disease Control and Prevention flu-vaccine report shows this year’s vaccine has been more than 55 percent effective in preventing flu severe enough to send a child to the doctor’s office and 45% effective for all ages, which is similar to the effectiveness of vaccines in previous years.

“Flu vaccination remains the best way to protect children and people of all ages against flu and its potentially serious complications,” says the report.

Previous ArticleChildren need 14 doctor visits before age 6, but preschoolers are increasingly not covered by insurance, especially in Kentucky
Next ArticleIf you’re worried about coronavirus, you should be more worried about the flu, and take the same precautions, including a flu shot