With all the people who come through the state Capitol, and all of the handshaking that goes on there, especially when the Kentucky General Assembly is in session, it’s no wonder the House opened Monday’s session with a call for members to keep in mind the many who were absent due to illness, or that the flu was mentioned several times in the Senate.

But some senators demonstrated how politics and public health don’t always match up.

Sen. Dennis Parrett, a Democrat from Elizabethtown, while recording votes that he missed while out with the flu, told his colleagues — and everyone watching Kentucky Educational Television — that the last two times he got a flu shot, he soon after got the flu, including this last time.

Parrett insinuated that the vaccine gave him the flu, but medical experts say that doesn’t happen.

No one contradicted Parrett, and his remark prompted Senate President Robert Stivers, a Manchester Republican, to say from the dais, “I’ve never taken the flu shot, and I’ve never gotten the flu.”

Several moments passed before Sen. Ralph Alvarado, R-Winchester, a physician, stood up and said, “I’d like to encourage everyone if they have not gotten their flu vaccination to get one.”

He noted that the flu has been particularly virulent this year and stressed that flu is one of the most preventable diseases because of the vaccine. “So people who are watching at home, please go out and get your vaccination,” he said.

And to laughter all around, Stivers uttered the line typically used when routine announcements are made: “Members, please take note.”

On the surface, what Parrett and Stivers said about the flu is no big deal. But from a public-health perspective, their comments repeated several persistent myths about flu vaccines, which have long been proven to be the best defense against this often serious disease. So far, flu has killed 80 Kentuckians during this season, which runs through May.

The federal Centers for Disease Control and Prevention says that unequivocally that a flu shot cannot give you the disease. The vaccines are produced in two ways, with an “inactivated” or killed flu virus, or by using only part of a flu virus. In other words, there is nothing in a flu vaccine that can infect you.

And while nasal-spray flu vaccines do have live influenza viruses, the CDC says they are weakened, and will not cause a person to get the flu.

One reason for this persistent myth is because the flu virus is constantly changing – which creates confusion and distrust of the vaccine – and some years the vaccine doesn’t cover the most prevalent strain of the virus.

Another reason for this persistent myth is because the flu shot does not offer protection immediately, and takes at least two weeks to kick in. So when someone says they got the flu right after having a shot, it means they were exposed to the virus before they developed immunity. Or, someone may have been exposed to a flu virus different from the viruses that the vaccine is designed to protect against. 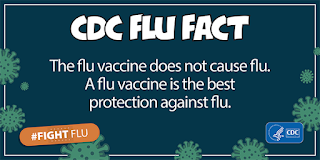 That said, some people do report a mild reaction to flu vaccinations. The most common reactions are soreness, redness, tenderness or swelling where the shot was given, but some report low-grade fever, headache and muscle aches.

The bottom line: The vaccine is about reducing your risk, not eliminating it. And even if you get the flu after getting a shot, chances are that your symptoms will be less bothersome than if you didn’t get it.

And while Stivers has never had the flu, despite never getting a shot, that doesn’t mean he isn’t at risk of getting it in the future. Also, it’s possible to be infected with the flu virus but have no symptoms.

And its not about Stivers or any other individual. Adults need vaccination to provide “herd immunity” for those who can’t be vaccinated like babies and those who are immuno-compromised.

The CDC notes that the flu is highly contagious and can spread to people as much as six feet away, largely through the tiny droplets made when coughing, sneezing or even talking.

As Alvarado said, the best way to protect yourself from the flu is to get a yearly vaccine, and it’s not too late, since the season usually runs through May. It is recommended that everyone over 6 months old get an annual flu vaccination.

Kentucky has a lot of room to improve its flu vaccination rates, especially among adults. The CDC reports that only 45 percent of Kentucky adults and 65% of the state’s children got a flu shot last season.

Besides vaccination, there are other, simpler ways to protect yourself from the flu, a cold, or even the novel coronavirus.

Washing your hands properly is one of the most important ways you can keep from getting sick and spreading germs to others. It is recommended that you scrub your hands with soap and water for at least 20 seconds, or the length of time it takes to sing “Happy Birthday” twice.

For the last two months, Kentucky has seen about 2,000 new cases of flu a week, and the number of deaths from it continues to rise, with 14 more adults in the state reported to have died from the flu in the week that ended Feb. 22. That brought the state’s total to 80 for the season. Four victims were under the age of 18, according to the state Department for Public Health.

The latest weekly report shows that in the week ending Feb. 22, Kentucky counted 1,943 new cases. During the flu season, 21,000 cases have been reported in Kentucky. The actual number of cases is higher, because not all flu cases are counted; flu does not have to be reported, and three counties did not contribute to the latest report. Here are the new cases recorded each week: