Kentuckians increasingly keep their guns loaded, and almost two-thirds who keep them loaded are not locking them up, according to a recent survey.

The Kentucky Health Issues Poll, taken Oct. 15-Dec. 6, found that 55 percent of Kentucky adults keep guns in or around their homes. Almost half of that group, 48%, said they were loaded, compared to 35% in 2011.

Among adults who live in a home with a child, the percentage with guns was virtually the same, 56%, but only 28% said their firearms were loaded. But 15% of those with children at home said their gun was both loaded and unlocked.

Those numbers haven’t changed since 2016, says the report. And the number of Kentucky adults who reported they kept loaded and unlocked guns in their homes, 64%, is also nearly the same as the KHIP results in both 2011 and 2016, when the same questions were asked. “Neither the proportion of homes with unlocked, loaded guns nor the percentage of such homes occupied by children has improved since 2011,” said a news release from the Foundation for a Healthy Kentucky, co-sponsor of the poll. Safety and health experts recommend keeping guns and ammunition in separate locations.

“We’re not making any progress in the most basic step that gun owners can take to protect against tragic and often deadly accidents,” Ben Chandler, president and CEO of the foundation. “Locking up your guns and keeping the ammunition in a separate place is recommended by multiple child-health and safety organizations to keep them out of the hands of kids who are either just curious or seriously considering harming themselves or others.”

Kentucky law neither requires guns to be locked nor imposes criminal liability for negligent firearm storage, even if a child gains access to the firearm and causes an injury or death, according to the Kaiser Family Foundation. 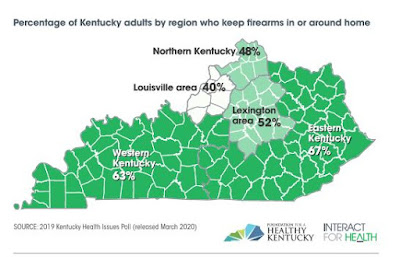 The share of Kentucky adults with guns at home is higher than the national average of 42% that was reported by a 2017 Pew Research Center poll.

Responses to this question in the Kentucky poll varied by region, with adults in more rural areas of the state more likely to report having a gun. In Eastern and Western Kentucky, respectively, 67% and 63% reported having a firearm in or around their home. The figure was 52% in the Lexington area, 48% in Northern Kentucky and 40% in the Louisville area.

Men were more likely than women to report having a firearm in or around their home: 65% and 47%, respectively.

The poll was funded by the foundation and Interact for Health, a Cincinnati-area foundation. It surveyed a random sample of 1,559 Kentucky adults via landlines and cell phones. The margin of error for statewide results is plus or minus 2.5 percentage points.

In 2018, the Centers for Disease Control and Prevention reported that 762 Kentuckians died because of a firearm, including suicides, homicides and unintentional injuries. That was a rate of 16.9 deaths per 100,000 people, 13th highest in the nation.

Previous ArticleFirst Kentucky case of covid-19, disease caused by coronavirus, confirmed in Harrison County; Beshear advises its people to avoid crowds
Next ArticleEditorial: suicides a growing health threat in Hardin County, but many are reticent to seek help