Gov. Andy Beshear showed how aggressive steps to limit social interaction can prevent deaths from a pandemic of a disease for which there is no vaccine. A reproducible version of the chart is below.
—–

This story was updated at 10 a.m. Monday, March 16 with news that Beshear will order the closure of restaurants and bars to inside traffic.

Kentucky has a Saturday-night and Sunday-morning problem when it comes to the greatest public-health threat in a century, the new coronavirus.

After seeing videos of people crowding into bars and restaurants on the weekend before St. Patrick’s Day, Gov. Andy Beshear said Sunday that he might have to follow the lead of other states (such as Ohio and Illinois) and use his emergency powers to close them. Monday morning, he said he would, effective at 5 p.m.

On Sunday morning, many if not most Kentucky churches held services, despite Beshear’s call several days earlier to cancel them.

Both measures are intended to slow the spread of the virus so that the respiratory disease it causes, covid-19, does not overwhelm the U.S. health-care system. Noting that he has asked hospitals to not do any elective surgeries after Wednesday, Beshear said, “We absolutely must be ready if we see a significant influx of cases.”

Many experts say that significant influx is not a matter of “if,” but “when.”

Dr. Anthony Fauci, the director of the National Institute of Allergy and Infectious Diseases, was asked on CNN Sunday if it is possible that hundreds of thousands of Americans could die from the disease. He replied, “It could happen, and it could be worse.

Andrew Slavitt, who ran the Centers for Medicare and Medicaid Services under President Obama, said on Twitter March 12 that experts expect the disease to kill more than 1 million Americans because the virus was not contained and testing for it has been so limited.

Fauci, told that many bars were filled over the weekend, was asked if the U.S. needs “a national lockdown,” closing such gathering places. “I would like to see a dramatic diminution of the personal interaction we see in restaurants and bars,” he said. “For a while, life is not going to be the way it was in the United States; we have to accept that.”

The disease appears to have limited effect on young people, but they are not immune and can carry it to others, Fauci noted. “That’s why everybody’s got to take this seriously, even the young.”

The first covid-19 patient identified in Kentucky was a 27-year-old woman from Cynthiana who has since recovered. Five other cases have been confirmed in Harrison County, two of them with a direct link through a church.
Beshear said Wednesday, March 11, that churches should cancel services. On Sunday, he was asked if he had any reports on compliance. He didn’t reply directly, but indicated reasons that he made the request; he noted the Harrison County connection and estimated that a third of his congregation at Beargrass Christian Church in Louisville, where he is a deacon, is in the demographic categories most vulnerable to the virus. Those are people over 60 and those with underlying medical conditions.
“I don’t think having church or going to church during this is a test of faith,” Beshear said. “I believe God gives us wisdom and has given us so many tools to be able to participate and worship remotely or through other areas.”

Compliance with his request appeared to be spotty. In Hopkinsville, the Hoptown Chronicle reported Saturday that most churches it surveyed planned to hold services.Unlike some other Roman Catholic dioceses, including Lexington, the Archdiocese of Louisville continued masses, but said communion wine should not be poured from the chalice, and parishioners shouldn’t touch during the passing of the peace, the Courier Journal reported. On Monday, Archbishop Joseph Kurtz reversed course and said public masses were being suspended.

Closing bars might improve compliance, one of the state’s leading religious figures suggested. Kentucky Today, a news outlet of the Kentucky Baptist Convention, the state’s largest denomination, quoted Hershael York, pastor of Buck Run Baptist Church in Frankfort: “I can’t really take the suggestion seriously when they are not asking theaters, bars, and clubs to shut down. Churches on Sunday morning are not the hotbed of contagion.”
Beshear reiterated Sunday that houses of worship had not been “singled out,” and said, “I know there are people who might politicize this — and every time I talk about my faith, I hear that — but I love my church. It’s an important part if my life; my faith is an important driver in helping me make the decisions that I am making during this crisis. We just need everybody’s help.”
To illustrate the importance of limiting the spread, Beshear displayed a chart illustrating how St. Louis and Philadelphia responded to the 1918 outbreak of so-called Spanish Flu, which infected more than a fourth of the world’s population and killed around 50 million. 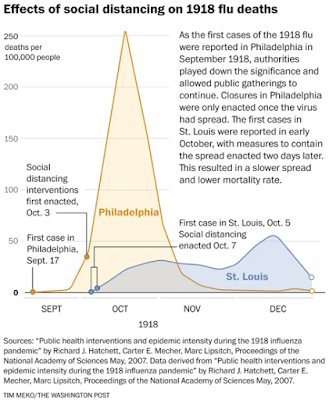 “In Philadelphia, they started their aggressive steps a couple weeks too late. It shows you what taking these steps, and taking them early, can do,” Beshear said.
“We don’t put this up to scare people; our health-care system is much better, much better, in 2020 than it was in 1918 and 1919. But this shows the importance of taking aggressive steps.”
The governor said people who note “only 20 positive” test results in Kentucky as of Sunday evening should realize that “We see the direction that this can go. I’m not gonna be the governor that acted two weeks too late. This is about protecting each and every one of us.”
Asked about the General Assembly session, which brings groups of people from all over the state to Frankfort, Beshear suggested that legislators focus on passing a budget, with the prospect of a special session he could call after the threat has passed. His answer illustrated that no one knows when that will be.
“Where we see this is going . . . where we can anticipate having the surge that we’ve got to be ready for in our health-care facilities, I believe it is increasingly clear that they need to do the most important work, do it in as short order as possible, and then go home,” he said. “We cannot say for certain that we would be able to have them back in enough time to pass a budget.” The current budget runs through June 30.

“We know that we’ll get through this,” Beshear said, using a version of his main mantra for the crisis. “We don’t know exactly how long it’s going to take. We know that when you reduce social contacts — and remember, social distancing is not isolation, and it shouldn’t be isolation — if you do not have the coronavirus, we want to make sure you have human interaction, but you have to have it in the right confines, and we have to be able to able to reduce overall contacts.”

He concluded, “If you want to get energy out, get outside, go for a run on your own; do not pack in to one place thinking that this is not a big deal. Yeah, what you’re doing probably won’t hurt you, but it could really hurt somebody else. That could be somebody’s parents; it could be somebody’s grandparents. I’m just asking you to do the right thing.”

Previous ArticleBeshear says he will close restaurants and bars; pleads against runs on stores; CDC advises against gatherings of 50+
Next ArticleRural hospitals seek help in covid-19 response legislation, which is blocked by Democrats, who say it’s too friendly to corporations