For a larger version of the infographic, click on it.
—–

Kentucky compares favorably with major bordering states in dealing with the coronavirus, according to recent compilations of testing and case data.

Among the six states, per person, Kentucky ranks second in the number of tests for the virus and is next to last in the number of reported cases, according to figures compiled by the Pegasus Institute, a Louisville free-market think tank.

“Total number of tests administered continues to be a very positive sign for Kentucky,” Jordan Harris of the Pegasus Institute wrote in an email. “In our region, only Illinois is completing more tests per 10,000 resident. This trend should be universally applauded and will hopefully only continue positive movement as tests continue to increase in availability. This allows us to have reasonable confidence tracking the virus in the commonwealth.”

Harris also wrote, “Kentucky’s curve remains relatively flat, as compared to our neighbors, despite increases in the total number of cases in the state. Our cases per 10,000 residents remains along the lowest in the region and despite a upward bend in recent days we have so far avoided the spike experienced by Illinois and Tennessee.”

Perhaps addressing those who would give Gov. Andy Beshear credit for the differences, Harris wrote, “The upward bend in recent days likely represent infections that occurred between five and 10 days ago, based on what we know about the incubation period and the timing of test results, so recently reported contractions likely occurred before additional social distancing measures were implemented by Gov. Beshear.”

Online educator Stephanie Jolly of Lexington gave Beshear credit on a post on Twitter, which included an infographic with daily numbers and notes of actions by the two states’ governors. “This is what effective governance looks like,” she wrote. “Two states with similar demographics but vastly different responses.”

Later, she added, “This data has given people hope, which is an infinitely more powerful outcome than any I could have anticipated when I sat down to make a graph. For every critique of scale or scope, others have said: ‘I’ve been really scared, but this makes me feel like we can tackle this.’ ‘Staying at home is hard, but this has convinced me that I need to keep doing it.’ ‘I’ve been feeling anxious about social distancing, but now I understand the reason behind it.’ Sometimes data isn’t just about the numbers.” 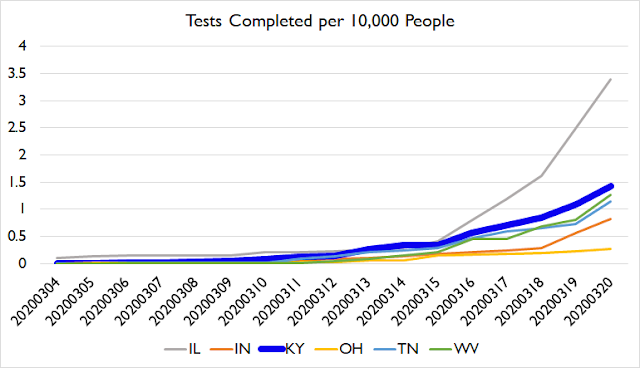 Previous ArticleBill to help independent pharmacies goes to the governor
Next ArticleBeshear ends non-essential retail, elective medical procedures; calls out violators, including a church; Sen. Paul has the virus