Gov. Andy Beshear and state Health Commissioner Steven Stack announced a detailed, four-phase approach to reopen health care in the state over the next four weeks. Beshear added that plans are also underway to slowly reopen other segments of the economy on May 11, 18, 25 and June 1.

Beshear said that on each date, “We are going to gradually ease some restrictions, bring some groups or some industries back online. It gives us some time to get the right compliance from restrictions, guidelines in place industry by industry, and allow it to go in a way where we gradually work up from those that might have some of the least contacts or in an area where we already have a lot of experience on what we need to do.”

The governor offered no details, except to say that by May 11, he would ask everyone to be wearing masks when venturing out to places where they might encounter other people, to “help us open things a little bit earlier. I know it’s going to look strange and it is going to look very different to us, and it might be a little hard on all of us to take in, but I want to make sure that as more people are able to go back to work or to open other things as we work through May, I want to keep us as safe as possible.”

Beshear and Stack announced three additional phases of health-care reopenings, which began Monday with non-urgent, non-emergency and diagnostic services. Stack the services can be provided in hospital outpatient settings, health-care clinics and medical offices, physical-therapy settings, and chiropractic and optometry offices. Dental offices can get back to work if they have implemented enhanced aerosol protections.

Phase two, starting Wednesday, May 6, will allow outpatient surgeries and other invasive procedures to resume. It will require testing for the coronavirus, and acute-care hospitals will have to set aside at least 30 percent of their total beds and intensive-care beds for covid-19 patients in this phase and the next two phases.

Phase three will begin Wednesday, May 13. It will allows hospitals and health-care facilities to begin doing non-emergency surgeries and procedures, but at half of their previous patient volume.

Phase four will start May 27. At that time, health-care facilities will decide what types of procedures and volumes they are able to handle, while maintaining the bed reserve..

Stack emphasized that any surge in covid-19 cases may require these phases to be adjusted. He also said every health-care facility must maintain at least a 14-day supply of personal protective equipment procured through normal channels, and if they don’t have it they cannot re-open.

“This is not intended to single out or punish anyone,” Stack said. “In order for health care to safely operate it has to be able to get to the materials it needs through normal channels to safely operate. So we’re going to tell you here dates that you can potentially open back up, but if you don’t have the materials you need to comply with these rules then you can’t open up.

Stack urged Kentuckians to not become complacent and to remain vigilant in their social distancing, saying this is not the time to feel like you are safe, but to realize the as the state re-opens the economy this will actually increase your risk of exposure.

“This is exactly the time when we are at risk for the greatest harm, if people start to get lax about complying with the things we ask you to do,” he said.

Beshear cautioned that even though new-case numbers tend to be low on Mondays because of weekend lab schedules, he was pleased to announce the state only had 87 new cases of covid-19 since Sunday, one of the lowest single-day totals the state has seen recently. He also announced five new deaths. Kentucky has identified 4,146 coronavirus infections and 213 deaths from covid-19.

“Unless we have a really large jump over the next couple of days,” Beshear said, “I think we have certainly plateaued, and my hope is that, very soon, we will be headed into a decline.”

Beshear concluded, “I believe that we can do this gradual re-opening with strict guidelines that we are going to need in a very safe way, but we need your buy-in on that too. We need to make sure that we are not moving too fast and that we do it the right way, but that you have confidence in the steps that we are taking.”

He warned, “At any time that any of our steps causes a spike or is starting to put us in a situation that threatens our lives and our health, you can bet we will make adjustments.” 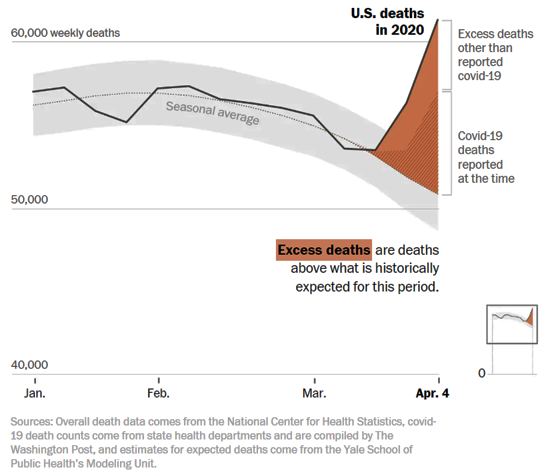 Previous ArticleCaring for your lungs, including avoiding tobacco smoke and e-cig aerosol, can help protect you from coronavirus, professors write
Next ArticleAttorney general calls bans on mass gatherings as applied to churches, and on interstate travel, unconstitutional; vows to sue