Gov. Andy Beshear displayed this chart to show young people are susceptible to the coronavirus.
—–

As news develops about the coronavirus and its covid-19 disease, this item may be updated. Official state guidance is at kycovid19.ky.gov.
By Al Cross and Melissa PatrickKentucky Health NewsAs 227 more coronavirus cases pushed the state’s total above 7,000, Gov. Andy Beshear said the pandemic in Kentucky remains on a plateau, but pointed to the Bowling Green area as an example of hotspots that may occur as he reopens the state’s economy.He also responded to a question about a comment he made Monday, that some people “want us to fall apart . . . want us to suffer big losses,” saying the crisis offers an opportunity to overcome political divides.As he started listing all counties with new cases, Beshear said there were 72 new cases in Warren County and 14 were children, including a 1-year-old, a 2-year-old, two who are 3, two who are 5, three who are 7, two who are 9, and an 11-year-old and a 12-year-old. 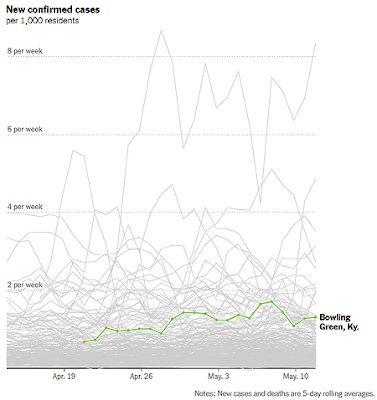 Bowling Green on NYT chart of recent covid-19 cases in metro areas;
top line is Sioux City, Iowa, site of an outbreak at a meatpacking plant.
—–

“What we’re seeing in Warren County is what many think is our future,” Beshear said. “Getting this in control, plateaued overall in the state and having to monitor the state as a whole, but then having hotspots that can start growing and then can grow very significantly.”The day before, Beshear had identified the Bowling Green area as having “one of the fastest-growing outbreaks in the country,” and that is confirmed by a New York Times chart of recent case growths in metropolitan areas.Health Commissioner Steven Stack said Warren County has second highest number of cases in the state, and that he would be sending medical-student volunteers there to help. “We will continue our dialogue and discussions with them to try to help them,” he said. “I just want to emphasize: The disease is still out there. This is not the common cold; this is a bad actor. When it sets up in a community and starts to take hold, hospitals can get overrun.”Stack announced that help is being made available to parents and health-care providers who may think a child has pediatric multi-symptom inflammatory syndrome, a rare condition that is being seen in some children who have had the virus and may not have had symptoms. He said a Kentucky Pediatric Covid-19 Hotline (800-722-5725) is now being staffed by Norton Children’s Hospital to answer questions from both parents and clinicians about the syndrome.Norton Healthcare said in a news release that nurses and other medical providers will take calls, offer advice and provide guidance on available resources. It said the children’s hospital is “launching a virtual hospital for covid-19 pediatric patients. Medical professionals will reach out proactively to families of patients who have been diagnosed or are under investigation for the illness after they’ve left the hospital.”Stack and Beshear said a 10-year-old boy with the syndrome is no longer on a ventilator at the hospital, and the governor’s daily news release said the 16-year-old who was being monitored for the condition in the hospital has been sent home to recuperate.Politics: Near the start of his briefing Monday, Beshear said, “The longer we’ve gone on this, the more intentional misinformation is put out there. It’s put out by some that don’t believe the virus is real, but let’s face it, a lot of what’s on social media right now is created by other countries in a way to try to destabilize us. That’s the last thing we want. There are a lot of people out there, internally and externally, that want us to fail, that want is to fall apart, that want us to suffer big losses.”Asked Wednesday by Kentucky Health News who in this country wants such failures and losses, he said, “I think that there are folks that are out there that care as much about politics as they do to how well we respond to this virus. I think that there are those who want to turn anything and everything into a blue-versus-red, a Democrat-versus-Republican issue, and that’s just not what we are facing. You know, we had significant divisions in this state and in this country before this, and we just shouldn’t now. And that shouldn’t be a frame of mind that we want to get back to. There shouldn’t be winners and losers, depending on your party; it should be the job we are doing for the people of the commonwealth.”Beshear then said the crisis is an opportunity to bridge those divisions.“This is our chance to move beyond all the pettiness, to move beyond what our politics and our government and so much has become, to move beyond the inability to talk to neighbors based on some of this stuff. This is our chance,” he said. “And there are some that profit from those types of fights and those types of divisions; there are some that think that that gives them more control or more power, I guess, but it is just wrong. . . . This is our chance not to just come together and be unified, but to stay that way; to be a better people, to be one people again, that can have civil disagreements, but not like what we have seen in the past. Let’s get back to encouraging each other about the ways that we are going about addressing this virus, let’s talk about best practices, let’s stop attacking each other in D.C. or elsewhere.”Tuesday, House Democrats introduced a $3 trillion relief package that includes aid for state and local governments. Beshear didn’t mention that directly, but renewed his plea for Congress to print more money.“We must, we must, have assistance from the federal government with our state and local budgets,” he said, adding that all other governors agree with him. “Our budget in the state, and every local budget, will be devastated without direct help from Congress,” he said. “Now is not the time to be timid; now is the time to make sure what it takes to get our country on the right track.”Senate Majority Leader Mitch McConnell called the proposal “a big laundry list of pet priorities” and said it was “exactly the wrong approach.” He has said there is no need to spend more money until Congress evaluates what it has already done, and has said that the national debt is already too large.In other covid-19 news Wednesday:

Previous ArticleBeshear decries ‘misinformation’ about virus, says his gradual reopening strategy is aimed at getting children back in school
Next ArticleBeshear says groups of 10 or fewer can start gathering the Friday before Memorial Day, and travel ban will expire same day