Guidelines for gatherings of 10 or fewer, which will be allowed starting Friday; click it to enlarge
—–

As he announced 20 more deaths, the largest one-day total yet, but a continued plateau in new cases of the coronavirus, Gov. Andy Beshear tried to both reassure and warn Kentuckians as major reopenings and a holiday weekend approached.

“I believe we can reopen, and reopen safely, if we do it carefully,” Beshear said after he announced the daily covid-19 fatality figure, which he said could have been inflated by delayed reports. It raised the state’s death toll to 346.

Before and after he gave the day’s statistics, he gave Kentuckians the same advice he says his father, former Gov. Steve Beshear, often gave him at big moments: “Son, this is really important. Don’t screw it up.”

Noting that all retail stores can open Wednesday, and restaurants can have limited openings Friday, when gatherings of up to 10 people will also be allowed, the governor said, “This is a big week. This is gonna be a lot of additional activity. We’ve just got to do this safely. . . . Let’s not screw it up.” That, he said, would mean that he would have to “pause our economy again.”

Asked what would cause him to do that, Beshear didn’t answer directly. He defended his reopening plans, said he would be watching for effects of reopenings of the previous week and “We’re watching all the indicators.”

Health Commissioner Steven Stack, who recently voiced concern that too many Kentuckians think the virus isn’t dangerous, showed a slide with recommendations of precautions to take in Memorial Day weekend gatherings: staying outdoors and six feet apart, wearing a mask, not sharing food and utensils, washing hands frequently, having hand sanitizer available, and not touching eyes, nose or mouth.

The most controversial piece of advice is to wear a mask.

“I don’t like wearing a mask in public any more than anyone else does,” Stack said. “It’s something we choose to do because its; what we need to do, to keep ourselves, and the people we love, and to keep the others around us safe. . . . Our actions have direct implications on the health and safety of others.”

Beshear noted that health experts think about one-fourth of people who have the virus don’t have symptoms but can spread it. He showed a video of Presbyterian ministers wearing masks, most of them saying “Wearing a mask is how I show that I love my neighbors.” Schuyler Olt of Carlisle Presbyterian Church said, “My mask shows I love you. Spread love, not germs.” 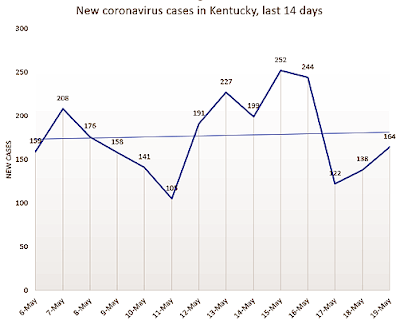 The 164 new cases Beshear announced brought the state’s adjusted total to 8,069, out of at least 153,800 tests. He said the state’s rate of positive tests continues to decline, one criterion in federal guidelines for relaxing restrictions. The state is still not meeting another criterion, a two-week downward trajectory in daily new cases, but that trendline is nearly flat.

In other covid-19 news Tuesday: 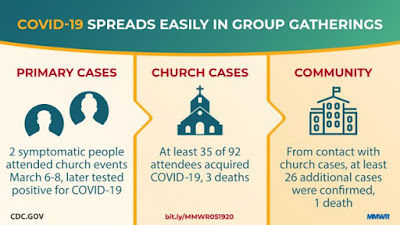 Previous ArticleState health commissioner says he’s worried that too many Kentuckians think the coronavirus doesn’t pose a danger to them
Next ArticleThis weekend, governor says, focus on three things to stay safe: your hands, your face and your space; he also urges more testing