Wearing a mask when out in public is even more important as Kentucky reopens its economy, medical professionals advise. Many Kentuckians are skeptical. 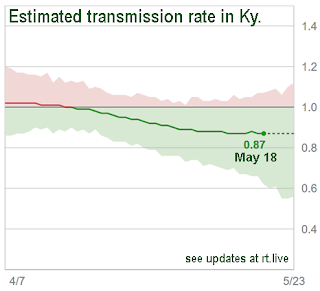 “It is actually, primarily, so that if you happen to have the virus and you don’t know it — which happens very frequently now — you’re not breathing it out, coughing it out on other people,” said Rebecca Dutch of the University of Kentucky, who has spent more than 30 years studying viruses.

“Every person we add into our interactions is someone we might either get it from or pass it to, or take it home to our families,” Dutch said. “Remember that the risk is still there, so think carefully about whether what you are doing is something that is a good idea.”

Dutch is a professor and the chair of the Department of Molecular and Cellular Biochemistry at UK, and leader of the Covid-19 Unified Research Experts (CURE) Alliance team, which advises on covid-19 patient care and clinical trials at the university.

She said the novel coronavirus has a relatively high infection rate, with each infected person causing three more infections if there are no restrictions on activities and contacts. Emergency restrictions imposed by Gov. Andy Beshear have reduced Kentucky’s infection rate to 0.87, according to a model created by the co-founders of Instagram, which displays each state’s rate at rt.live. A rate of less than 1 means the virus should eventually stop spreading.

It will be important to watch this number as the state has fewer restrictions and more contacts; Beshear has refused to say how the infection rate drives his decisions, but New York Gov. Mario Cuomo has said a rate of 1.1 or above would be a trigger for him to reimpose restrictions.

As he allowed opening of Kentucky’s stores and restaurants, and social gatherings of 10 or fewer people, Beshear used the rhyme “Hands, face and space” to summarize the medical advice: Keep your hands washed; don’t touch people not in your immediate family; wear a mask in close quarters; avoid touching your face; keep six feet of separation; and to entertain outside, if at all possible.

“All of these are mechanisms just to try to stop as much spread as we can,” said Dutch. “So that is why the governor is now asking people to mask.”

The official message also came with a warning that some Kentuckians may have become complacent about their risk of getting the virus. “Some may conclude that the danger is not still there, and I’ve got to urge you, the danger is still there. If we take our eye off the ball . . . we could find ourselves in late June paying very dearly for our actions today,” Health Commissioner Steven Stack warned May 22.

The most controversial piece of advice is to wear a mask, so Beshear is asking Kentuckians to say on social media posts why they wear one, and to talk to others about it.

“Some people have objected to masks, and the challenging part about that is you can object to a mask on your own personal health, but it is not your own personal health that it is going to impact,” Beshear said May 19. “It is other people’s health, so it is more about your willingness to protect other people if you are wearing or not wearing one.”

The governor regularly points out that masks are recommended by the White House and the Centers for Disease Control and Prevention. At one point he said they shouldn’t be a partisan issue.

A Kaiser Family Foundation Poll released May 22 found that Democrats are about twice as likely as Republicans to say they wear a mask every time they leave their house: 70% and 37%, respectively. Majorities of each party said they wear a mask “most of the time.”

The poll also found that while 72% of Americans think President Trump should wear a mask when meeting with others, only about half of Republicans, 48%, agree. The report says that the partisan difference in largely driven by Republican men.

A pushback on several levels

Trump says he doesn’t need to wear a mask because he is tested daily for the virus, but critics say he is missing an opportunity to set an example that would save lives. Thursday, he refused to wear a mask in front of news cameras while touring a Ford plant in Michigan, saying “I didn’t want to give the press the pleasure of seeing it.” He wore a mask when news cameras weren’t around, but someone on the tour took a picture of him and it was widely circulated.

Senate Majority Leader Mitch McConnell regularly wears a mask, bit U.S. Sen. Rand Paul, an ophthalmologist, says he won’t wear one because he has had the disease and is immune. However, experts warn that this hasn’t been proven, and there have been reports of people testing positive weeks after they have recovered, and that it is uncertain if they are contagious or not.

Fourth District U.S. Rep. Thomas Massie weighed in on Twitter yesterday, saying “There is no authority in the Constitution that authorizes the government to stick a needle in you against your will, force you to wear a mask, or track your daily movements. Anyone who says you have to right to avoid those things fundamentally misunderstands the 9th” Amendment, which says the Constitution’s language “shall not be construed to deny or disparage others retained by the people.”

And in a move that got national notice, a Manchester convenience store posted a sign banning masks. Alvin’s responded to complaints by saying it was a “joke,” the Lexington Herald-Leader reported. Later, it clarified the statement in a Facebook post, saying it would not turn away mask-wearing customers and “It’s your choice to wear one or not, not our government’s choice for us.” Newsweek reports that the sign has since been taken down.

Earlier, Chris Kenning and Sarah Ladd of the Louisville Courier Journal took a look at who was or wasn’t wearing masks around Kentucky and found a low percentage of compliance in one of the hardest-hit parts of the state.

Mason Barnes, Judge-Executive of Simpson County, just south of Warren County, which continues to have one of the state’s highest infection rates, told the CJ, “I’d say 70 percent to 80 percent of the people are not wearing masks when they’re out and about.”

Beshear has said Kentuckians will not be cited or arrested for not wearing a mask in public.

So, why should you wear a mask?

The simple answer is because the virus is primarily spread by tiny droplets from infected people, not just coughing and sneezing, but from talking and breathing. A mask can stop the spread of those droplets, especially from people who have the virus but don’t know that they do. Stack, the health commissioner, says about one in four people with the virus have no symptoms.

Dutch, the UK virologist, pointed out that people can be very infectious just before they get symptoms.

She said, “When people can spread it before they know they are sick, we actually have to take extra precautions because we all have to think, ‘Oh, I might have this, what do I need to do to protect people when I go out?'”

More than 40% of Kentucky adults are at higher risk of serious illness if infected with the virus because they have heart disease, chronic obstructive pulmonary disease, uncontrolled asthma, diabetes or a body mass index of 40 or more, indicating morbid obesity, according to the Kaiser Family Foundation. It did not include people with another risk factor, cancer, in which Kentucky is a national leader.

The value of wearing a mask is illustrated by a new study, published in The Proceedings of the National Academy of Sciences. It shows how normal speaking can launch thousands of droplets that can remain suspended in the air for eight to 14 minutes, allowing them to be inhaled by others. “There is a substantial probability that normal speaking causes airborne virus transmission in confined environments,” the study report says.

The researchers said in a letter to The New England Journal of Medicine that the same experiment, using scattered laser light, found that use of a cloth face mask blocked nearly all droplets emitted when talking. They posted a video, the last part if it in slow motion, to show their finding.

Science supporting mask wearing is so strong that more than 100 prominent health experts have asked governors to require them. They write that the research “strongly suggests that requiring fabric mask use in public places could be amongst the most powerful tools to stop the community spread of covid-19.”

So why did the CDC recommend not wearing a mask two months ago? The Mayo Clinic says face masks were not recommended at the start of the pandemic because experts didn’t know the extent to which people with covid-19 could spread the virus before symptoms appear, nor was it known that some people have covid-19 but don’t have symptoms.

The CDC now recommends the use of reusable cloth masks so that surgical masks and N95 respirator masks, which continue to be in short supply, can be saved for health-care workers.

The CDC guidance says cloth masks should: fit snugly but comfortably against the side of the face; be secured with ties or ear loops; include multiple layers of fabric; allow breathing without restriction; and be able to be laundered and machine-dried without damage or change to shape. It also cautions that they should not be placed on children under age 2, anyone who has trouble breathing, or anyone who would have trouble removing the mask without help. The Mayo Clinic recommends that cloth face coverings be washed after every day of use.

Beshear’s “healthy at work” rules require businesses to have employees to wear a cloth mask, unless it is a health or safety hazard to do so, or if they are working alone or in an enclosed space, or if they are working in an area that allows for appropriate social distancing. The order also encourages customers to wear masks, and allows businesses to refuse to serve customers not wearing them.

Dutch urged caution as the state reopens its economy, saying that the “long road ahead of us” will require all of us to make smart choices if we are to slow the spread of this virus, like continuing to practice social distancing and wearing a mask.

“I think it is really critical that people understand that as we are reopening the economy, we’ve done a good job of slowing down the rate of infections, but the virus is not gone,” she said.

She added later, “The best we can do is anything that can just slow down how often people spread this virus from them to someone else, and that’s how we win. Hopefully we will do well. We will see.”

Previous ArticleProtesters hang Beshear in effigy, sparking bipartisan rebukes
Next ArticlePediatrician offers facts about serious syndrome that can attack children who were otherwise unaffected by the coronavirus