This chart was topped with a headline, “Kentucky in Lockstep with White House/CDC Guidance;” Gov. Andy Beshear said May 4-10 included about 350 cases found by mass testing at a prison.
—–

By Melissa Patrick and Al Cross

Gov. Andy Beshear said Thursday that Kentucky would have had tens of thousands more cases of the coronavirus if not for the “drastic and significant steps” that he took to control it. He said the number of new cases is clearly declining, but “We have to remember the lessons that we’ve learned.”At his daily briefing Beshear showed a bar graph of new cases by week, showing a doubling of cases through the week of April 6-12, about two weeks after he all but ordered Kentuckians to shelter in place. Two weeks is the incubation period of the virus.He said that if the doubling of cases had continued at the first month’s rate, by May 4 the state would have had 16,000 new cases in a single week, and 32,000 cases the following week. But instead, from the week of April 6-12 the weekly case numbers were on a plateau, not an escalation. 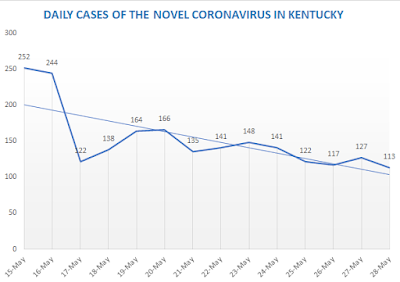 “We took drastic and significant steps and it worked,” he said. “Kentuckians came together, we sacrificed, we did what it took, we put our dreams on hold, and we stopped that pandemic curve. . . . We now have one of the better declines over the last 14 days.”Beshear noted that the news-and-data site Vox identified Kentucky as one of only three states (the others are New York and Alaska) that meet federal requirements for reopening. Vox looks at cases over the last week as well as the last two.The two-week period is a key metric in the federal guidelines for states to reopen their economies: a downward trajectory of new cases over a two-week period. Beshear called this decline fragile.“We are in a better place, but one where we have to remember the lessons that we’ve learned,” he said. “Our goal now is to keep this decreasing.”Beshear said it was “staggering” that more than 100,000 Americans have died of covid-19 in just over four months, including 400 in Kentucky.“We have to recognize the toll that this virus has taken, and the toll that it’s going to take, until we get to that vaccine,” he said. “And we have to honor these families and this loss that this country has experienced by being committed to making sure that we reduce the loss going forward.”Asked when the state might see an increase in cases due to recent reopenings, Beshear said, “We might not see the continued full decrease, but based on our numbers for the last couple of days for ‘Healthy at Work’ it looks like people are doing really well.”He said that if there are outbreaks, “I believe our response can be surgical and not necessarily an across the board pause,” because the state will have plenty of testing, and tracing of contacts of people who test positive.He said the control of outbreaks at the Green River Correctional Complex in Central City and Western State Hospital in Hopkinsville show the state “can stabilize outbreaks even in difficult settings. I believe we’re gonna be seeing that in long-term-care facilities.”Executive Cabinet Secretary J. Michael Brown said the outbreak at the prison had leveled off “to a great extent,” with only six new cases since inmates were separated by categories of infection and exposure two weeks ago. He said the other 12 state correctional institutions learned lessons from the outbreak; they have had only one inmate and two employees test positive. “It’s an example of a plan implemented under stress, but one that worked,” he said.

Beshear, asked if it’s time to let visitors back into prisons, said it is still too risky. He said that also applies to long-term-care facilities.

Asked why he made the decision, Beshear said, “We think that we are on a decline,” have other facilities that can be used, and Health Commissioner Steven Stack “thought we could get by.”

After commending Kentucky Kingdom‘s extensive proposal for reopening, Beshear said the Louisville amusement park would be allowed to open the week of June 29, but cautioned that “it will look very different.”

He said “we believe” that in that same week, guidance will be in place to allow “limited opening” of swimming pools. “It isn’t going to be easy to meet that guidance,” he said, which will include social distancing. He noted that some communities may choose not to open their pools, and asked Kentuckians to trust their local leaders with this decision.

The governor had the Rev. C.B. Akins Sr. of First Baptist Church Bracktown in Lexington offer a prayer for those who had died. Akins spoke about the racial disparities that exist among those who have died from the virus, and society as a whole, and called for systemic change to fix it.

Akins said the nation has long had a “racial pandemic . . . emboldened now afresh by people in powerful positions.” That reflected the language Beshear used after being hung in effigy, blaming the actions of right-wingers on Republican politicians who had “embraced and emboldened” them.

Each day, Beshear breaks down the number of coronavirus cases and covid-19 deaths by race and ethnicity. He reported Thursday that 14.71 percent of the cases and 18.21% of the deaths are among African Americans, while only 8.4% of the state’s population is black.

Repeating a goal he voices frequently, Beshear said, “As we emerge, and we will, from this pandemic, let us be committed to addressing inequalities that have existed in our country for far too long and let’s start with health.”

In other covid-19 news Thursday:

Previous ArticleMost of Kentucky’s Federally Qualified Health Centers and Rural Health Clinic are testing for the coronavirus; anyone can get a test
Next ArticleVirus cases spike; Beshear says too early to draw conclusions; Butler, county with highest infection rate, reports 6 deaths in 1 day