He also announced what he said would be the first step to eliminate the health inequality among African Americans that has been “laid bare” by the pandemic, an effort to get every black Kentuckian covered by health insurance.

Beshear said only 70 new cases of the virus were reported in Kentucky on Sunday, and just 120 on Monday, with only one death each day. Sunday’s number of cases was the lowest reported since Sunday, April 27, when 71 cases were reported. Sunday numbers are often lower due to limited reporting.

The two-day report followed a four-day period that had an average of 292 cases per day, which was part of a nine-day stretch with an average of 244. The increases drove up the estimated transmission rate of the virus in the state to seventh highest in the nation, by one measure.

Beshear said Kentuckians’ increased number of contacts as their economy continues to reopen “is creating more cases. Now, those cases are still in a certain range that is manageable, but we will have to be watching as that continues. We still don’t have enough data from the last several days to have a full conclusion.”

Asked if he still feels comfortable with his strategy for reopening the state’s economy, Beshear said, “I do. We are very carefully monitoring this. . . . Remember, when we had a two-week decline, it took us almost a week after that to truly see it.”

He added, “I do worry that some aren’t taking it a seriously as we should.  . . . We know that distance and masking work, and if people are unwilling to do those things, it makes it less safe.”

Asked if he has decided that the state will have to live with a certain number of new daily cases for then foreseeable future, Beshear said it would be “really hard” to keep the number under 120 “in the near future, and as long as we are taking care of people, as long as we are protecting the long-term-care facilities, which we really need to, as long as we’re ensuring there’s not an outbreak like [one at a state prison], then we’ve got an opportunity to reopen our economy while dealing with this virus.”

Among the new cases Sunday and Monday, 61 were in Louisville Metro and 48 were in Lexington. The state has had 11,476 people with the virus, 3,359 of whom have recovered and 472 of whom have died.

Noting that African Americans have accounted for 16.4 percent of the deaths, Beshear said, “Inequality here has resulted in death, and it’s our job to do something about it. Let’s make sure everybody has the means to see a doctor.”

He said the one thing he can do immediately to address health inequality is “an effort to cover 100 percent of our individuals in our black and African American communities. Everybody. We’re going to be putting dollars behind it, we’re going to have a multifaceted campaign to do it.”

He offered few details, but suggested that the effort would look like the one that the administration of his father, Steve Beshear, conducted to sign up people for Medicaid and subsidized health insurance after expanding it under the Patient Protection and Affordable Care Act. “The blueprints are out there on how to do it,” he said. “There are multiple groups out there that have done this at different times.”

About 5.8% of black Kentuckians had no health insurance in 2018, according to the Census Bureau’s American Community Survey. The statewide figure was 5.6%.

Beshear said two other areas for effort in the future will be quality and access. “You shouldn’t have to take multiple buses to see a doctor,” he said. 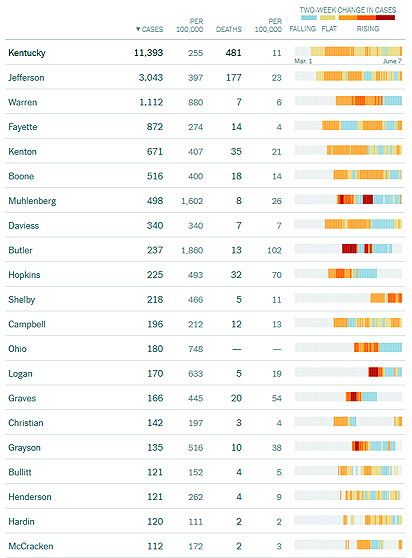 Previous ArticleFree webinar Friday on actions against health disparities, limiting covid-19 impact on marginalized and vulnerable populations
Next ArticleUPDATE: WHO official says coronavirus carriers without symptoms rarely spread it to others; other experts say it’s too early to say that; WHO now says scientist don’t know actual rates of asymptomatic transmission