Kids Count charts; for a larger version of any chart, click on it.
—–

The 31st annual Kids Count Data Book on children’s well being, released June 22 by the Annie E. Casey Foundation and Kentucky Youth Advocates, ranks Kentucky 37th in the nation for the overall well-being of its children, a drop from 34th in last year’s report.

The state improved in most measurements, but dropped apparently because of a switch in measurement: replacing alcohol or drug abuse with obesity, a problem area in which Kentucky kids rank higher.

Nearly one in four Kentuckians are children.

The report points out that it does not reflect current conditions for families in the covid-19 pandemic, “which has overwhelmed states and communities and has decimated the health and economic stability of families, with a profoundly disparate effect on people of color.”

Still, the report can be used “as a guidepost as we work to safely and thoughtfully move forward from the immense impacts of the pandemic,” KYA Executive Director Terry Brooks said in a news release.

The latest data are for 2018, and are largely compared with data from 2010. The report rates children’s overall well-being through 16 indicators in four major domains: health, economic security, education, and family and community.

Overall, Kentucky saw improvement in 11 of the 16 indicators. KYA called the improvements “measurable, but still inadequate,” largely because it says Kentucky is not making progress as quickly as other states.

Health: Kentucky’s health ranking plummeted to No. 42 this year, largely because the report used the percentage of kids who are overweight or obese, instead of how many of them abused alcohol or drugs in past years. With the original indicator, Kentucky ranked 25th last year.

“Being overweight or obese during childhood can have harmful effects on a child’s overall health and well-being into adulthood,” says the report. “Children who struggle with their weight are at higher risk for a range of health problems, including asthma, heart disease, diabetes and cancer. They are also more likely to experience social and emotional difficulties.”

One of the state’s bright spots continues to be that it has so few children without health insurance, 4%. The national average is 5%.

That said, a report released in December by Georgetown University Health Policy Institute found that insurance rates for Kentucky’s children under 6 have dropped, with 4% under 6 lacking insurance in 2018, compared to 2.7% in 2016. In percentage points, Kentucky’s increase in uninsured kids was the nation’s fifth largest.

Another indicator of children’s health is the number of babies that are born at less than 5.5 pounds. That rate is 8.9% in Kentucky, where it has hovered for years.

KYA notes that socioeconomic characteristics and environmental exposures, such as secondhand smoke, air pollution, lead and pesticides, can increase the risk of low-weight births. “These are likely contributing factors for a cluster of high rates of low-weight births in Eastern Kentucky,” it says. 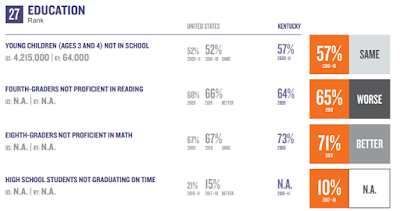 Education: Kentucky found itself in the bottom one-fourth of states for all domains but one, education, where it ranked 27th for the second year in a row. The good news is that 90% of Kentucky high-school students graduate on time, ranking the state third in the nation.

The bad news, KYA says, is that there has been little change in the past 10 years when it comes to the percentage of Kentucky children who are proficient in reading and math.

In addition, 57% of the state’s young children are not attending pre-school, a figure that has not changed since 2009-11.

The report says establishing conditions that promote educational achievements for children is critical because it helps them remain in school, graduate on time, pursue higher education or training, and “successfully transition to adulthood.” 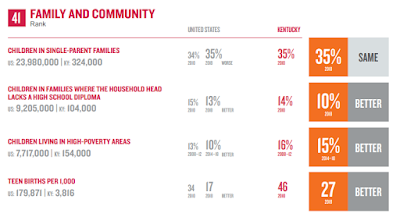 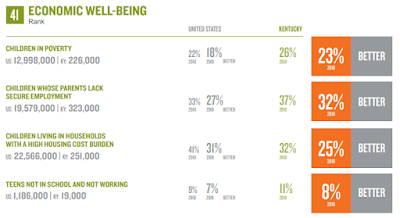 Economic Well-Being: Kentucky ranks 41st in economic well-being, with all four indicators showing improvement when compared to 2010, but again, KYA says other states are improving more.

This year’s report shows that the percentage of Kentucky children in poverty dropped to 23% in 2018, from 26% in 2010; children whose parents lack secure employment dropped to 32% from 37%; and teens who are not in school and not working dropped to 8%, from 11%.

As with many such indicators, racial and ethnic disparities exist. For example, while the percentage of children living in households with a high housing-cost burden dropped to 25% in 2018 from 32% in 2010, there continues to be a huge difference in this indicator between the state’s Black and white children: 42% and 20% respectively. A high housing-cost household is defined as one where more than 30% of monthly household pre-tax income is spent on housing-related expenses, including rent, mortgage payments, taxes and insurance.

“High housing costs weigh more heavily on low-income families,” says the report. “Paying too much for housing limits the resources families have for other necessities, as well as their ability to save.”

In the overall measure of poverty, 42% of Black and 33% of Hispanic children in Kentucky live in poverty, while 20% of white children do.

“While this data is important, it doesn’t tell the whole story about how all Kentucky kids are doing,” said Brooks. “The discomforting truth is that the ZIP code in which our children live, the amount of money their family earns, and the color of their skin are pervasive and powerful influences on their childhood and the future they are able to embrace. Systemic inequities continue to limit opportunities to thrive for children of color, and it is our obligation to not only track and understand those, but also to transform systems so every Kentucky kid can grow up healthy, safe, and hopeful for the future.”

KYA’s recommendations call for a strong state budget as part of covid-19 pandemic recovery efforts; strong investments in the state’s safety net and child abuse and neglect prevention programs; continued federal investments in childcare; and for all state agencies to systematically collect, analyze and report data disaggregated by race and ethnicity for those they serve.

Previous ArticleAnthem and Passport appeal Beshear administration’s decision kicking them out of state’s Medicaid business as of Jan. 1
Next ArticleDust from Sahara could pose a health threat through weekend