New cases of the novel coronavirus in Kentucky increased for the fifth straight day, to 778, the fourth largest number yet, and the number of Kentuckians in intensive care for the virus’s covid-19 disease rose to the highest in months.

Gov. Andy Beshear emphasized the third consecutive decline in the percentage of Kentuckians testing positive for the virus in the last seven days.

The 5.43 percent rate was slightly under the daily average for the week so far, 5.51%, and notably under the 5.81% reported Wednesday. Last week, the rate rose above 5 percent for the first time since testing became generally available, helping prompt Beshear to impose new restrictions.

“We still have too many cases and we need to do everything we can to try to decrease those,” Beshear said in a press release. “We’re also seeing an increase of patients in the ICU.”

The release didn’t mention the intensive-care-unit numbers from the state’s daily report: 150, up from 110 on Thursday, a 36% increase, and exceeding the recent ICU high of 145, reported July 22. Higher numbers were reported in the spring, during the pandemic’s first surge in Kentucky.

Beshear continued to say the latest surge has slacked off to a plateau, based on weekly figures. He said it appears that this week will end with about the same number of cases that were reported last week. That is speculative, because two days remain in the reporting week, which runs from Monday through Sunday.

Two different snapshots of the data illustrate how different it can look. The state’s seven-day rolling average stands at 609, close to where it has stood for the last five days. But the three-day average is at 685, the highest since the 748 recorded on July 25, when the state recorded its third-highest number of new daily cases, 836. Here are graphs of the three-day and seven-day averages this month: 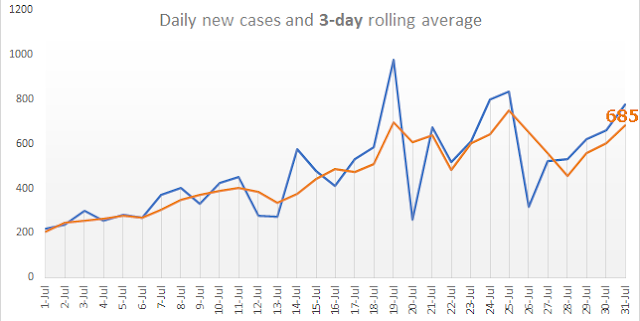 Studies on virus spread by children have implications for schools

A study released today by the Centers for Disease Control and Prevention suggests that children of all ages are susceptible to the novel coronavirus, SARS-CoV-2, and can spread it to others. The study is one of the few that documents spread among children, so it could guide school officials as they decide when and how to resume classes.

“Asymptomatic infection was common and potentially contributed to undetected transmission, as has been previously reported,” CDC said. “This investigation adds to the body of evidence demonstrating that children of all ages are susceptible to SARS-CoV-2 infection and, contrary to early reports might play an important role in transmission.”

Another study has found that children under age 5 with mild to moderate covid-19 had as much or more virus in their their upper respiratory tract as adults, Dennis Thompson reports for MedicineNet. The authors wrote in a research letter in JAMA Pediatrics that “Young children can potentially be important drivers of SARS-CoV-2 spread in the general population.”

The studies “could have massive impact when it comes to school reopenings,” CNN‘s Jake Tapper reported. Dr. Michael Saag, professor of medicine and infectious diseases, University of Alabama at Birmingham, told him, “This is a giant experiment; we don’t know what to expect.”

In other covid-19 news Friday:

Previous ArticleCases up, positive-test rate down; Beshear says mask mandate having effect, but suggests more people should work from home
Next ArticleHospitals overall are losing money, and it’s likely to get worse; Cynthiana hospital says it’s ‘at a negative 25% margin’