The latest weekly report to states from the White House Coronavirus Task Force contains many recommendations for state and local officials that Kentucky officials have not implemented or even revealed.

For example, it recommends that the state prohibit visitation at long-term-care facilities in most Kentucky counties, those in the red and yellow danger zones as defined by the task force.

It recommends that people with obesity, diabetes and high blood pressure in those counties shelter in place, much as Gov. Andy Beshear ordered Kentuckians to do from late March to early May.

Beshear spokeswoman Crystal Staley told Kentucky Health News Monday morning that Beshear met with Dr. Deborah Birx, the task force’s response coordinator, “to gather recommendations directly, and the actions taken by Gov. Beshear follow her advice. She would agree that too many Kentucky counties are in danger and that action was needed statewide.”

Still, the recommendation to stop visitation at long-term-care facilities will be at the top of the agenda for Tuesday’s meeting of the task force that the state has assembled to help the facilities get through the pandemic, task-force coordinator Keith Knapp said Monday morning.

The White House report also recommends that public officials “Ensure that all business retailers and personal services require masks,” something that is not being done in much of the state, if anecdotal reports of limited mask wearing and enforcement in many businesses are indicative.

Beshear has acknowledged the need for better enforcement by businesses, and backup enforcement by health departments. “There’s not been enough enforcement out there; we can admit to that,” he said July 27.

Beshear has gone farther than the recommendations in at least one case, limiting social gatherings to 10 people — something the task force recommended by done only in red zones.

The latest White House report, dated July 26, was sent to state officials. It was obtained and published by The New York Times. Kentucky officials have not responded to requests for a copy of the report; one of Beshear’s emergency pandemic orders gives custodians of public records 10 days to respond to requests for records instead of the usual three.

Here are the recommendations to red and yellow zones in Kentucky in the July 26 report. Most are the same for both zones; this list notes major differences.

Public Messaging
Wear a mask at all times outside the home and maintain physical distance
Limit social gatherings to 25 people or fewer (10 in red zones)
Do not go to bars or nightclubs
Use takeout, outdoor dining (indoor dining in yellow zones when strict social distancing can be maintained)
Protect anyone with serious medical conditions at home by social distancing at home and using high levels of personal hygiene (in red zones, handwashing and surface cleaning are emphasized)
Reduce your public interactions and activities to 50% of your normal activity (25% in red zones)
Public Officials
Limit gyms to 25% occupancy and close bars until percent positive rates are under 3; create outdoor dining opportunities with pedestrian areas (gyms in red zones should be closed)
Institute routine weekly testing of all workers in assisted living and long-term care facilities; require masks for all staff and prohibit visitors
Ensure that all business retailers and personal services require masks and can safely social distance Increase messaging on the risk of serious disease for individuals in all age groups with pre-existing obesity, hypertension and diabetes, and recommend to shelter in place
Work with local community groups to provide targeted, tailored messaging to communities with high case rates, and increase community-level testing
Recruit more contact tracers as community outreach workers to ensure all cases are contacted and all positive households are individually tested within 24 hours
Provide isolation facilities outside of households if positive individuals can’t quarantine successfully
Testing
Move to community-led neighborhood testing and work with local community groups to increase access to testing (in red zones, increase community-level testing)
Surge testing and contact-tracing resources to neighborhoods and ZIP codes with highest case rates
Diagnostic pooling: Laboratories should use pooling of samples to increase testing access and reduce turnaround times to under 12 hours; consider pools of three to five individuals
Surveillance pooling: For family and cohabiting households, screen entire households in a single test by pooling specimens of all members into single collection device

The report also includes, for each state, four maps showing new cases, positive-test rates and the change in each from week to week. Here are Kentucky’s maps from the July 26 report, comparing the week of July 18-24 with the previous week, July 11-17. For a larger version of the image, click on it. 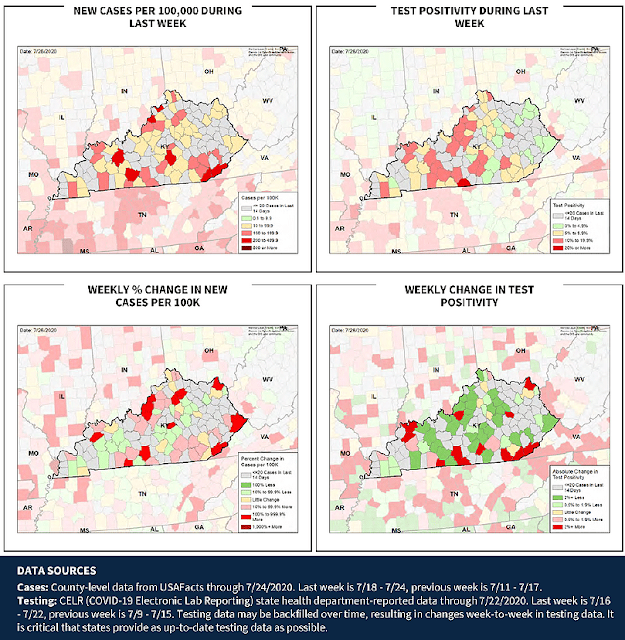 Previous ArticlePandemic calls for local leadership and trusted voices
Next ArticleAlmost half of counties still lack syringe exchanges, including 20 of those most vulnerable to drug-related disease outbreaks