Counties with fewer than 10 total cases are not included in the White House task force alerts.
—–

The latest weekly White House Coronavirus Task Force report on Kentucky is less red and more yellow, and if that sounds good, it is.

It means that fewer counties (13, down from 18) are in the task force’s “red zone,” for places where new cases of the virus numbered more than one per thousand residents and the share of residents who tested positive for the virus was higher than 10 percent.

Overall, the report for Saturday, Aug. 1 through Friday, Aug. 7 shows 53 counties in one of the danger zones, one more than the previous week.

The state-by-state reports make recommendations to states. Kentucky has generally followed them, in some cases going farther than advised, but on Monday Gov. Andy Beshear went contrary to two recommendations by reopening bars and increasing restaurants’ indoor capacity to 50%.

The report advises, “Keep establishments closed where social distancing and mask use cannot occur, such as bars, nightclubs, and entertainment venues. Continue to limit indoor dining at restaurants to 25% of normal capacity and continue expanded outdoor dining.”

Beshear and Dr. Steven Stack, commissioner of the state Department of Public Health, said at a news briefing Monday that it’s better to have people drinking in bars that can be regulated than at the alternative many have found: private parties that are impossible to regulate.

The report includes maps that show, in ranges, the new-case rate and the positive-test rate for the week, and the changes from last week, as well as a national map that shows how Kentucky and its counties compare to the rest of the nation in new cases by population last week. For a larger version of any map, click on it. 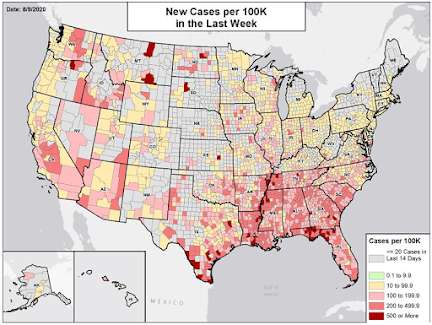 Previous ArticleBeshear recommends no in-person instruction in schools until Sept. 28; says open, regulated bars better than private parties
Next ArticleOverdose deaths in Kentucky rose 5% in 2019; officials say fentanyl and methamphetamine were drivers of the increase