Table from White House Coronavirus Task Force report; for a larger version, click on it.
—–

By Melissa Patrick
Kentucky Health News
Gov. Andy Beshear announced 1,054 new cases of the novel coronavirus Tuesday, and said it signals another record-breaking week.
“We are experiencing an escalation, our third major escalation in this covid crisis, and it is significant,” Beshear said at his daily briefing. “Last week we had 6,126 positive cases and we are on pace to have more than that this week.”
Beshear again reminded Kentuckians that higher case counts result in more deaths, noting that the state can expect 104 more deaths from last week’s cases because its mortality rate for the disease is 1.7%. “That shows you how quickly the number of people that we lose can accelerate,” he said.
The share of Kentuckians testing positive for the virus in the past seven days was 4.69%, still short of the 5% danger zone. Beshear cautioned that this rate could “be impacted really quickly if we keep having this many positive tests.”
Beshear didn’t announce any new restrictions to stem the escalation, instead reiterating that it’s up to Kentuckians to step up and do their part.
“We must act. . . . It’s not about new steps, but we will take them if we have to. We saw with the last escalation that we have the power to stop it if we simply do what we know works and that is wearing a mask, engaging in social distancing,” he said. “And if we are honest with ourselves, we know that fewer people are wearing masks right now than they were” when he mandated masks in July. (He renewed the order Tuesday.)
Beshear said Monday that he would step up enforcement of the mandate and ask county judge-executives and mayors to help. He said Tuesday that he had talked with them, and they can make a “huge difference.”
“Our expectation is that they will step up, even though it is hard, and begin pushing and pushing and pushing people the right way.” Earlier, he said, “We as leaders need to make sure that if we go to a retail establishment and people aren’t wearing masks, that we say something to that establishment.” He said retailers should not accept money from people not wearing masks.
Asked about President Trump’s actions since being released from the hospital with covid-19, which include downplaying the virus on social media and removing his mask in front of cameras, Beshear said the president has an “opportunity for true leadership” by setting life-saving examples for infected people, including wearing a mask when they are around others.
Beshear didn’t mention Trump’s false tweet about the flu, but Health Commissioner Steven Stack said most Kentuckians understand that the flu killed 22,000 Americans last season, while covid-19 has already killed nearly 220,000.
Twitter added to Trump’s tweet a note saying it violates the platform’s rules about spreading misleading and potentially harmful information related to covid-19. Facebook removed a similar post. 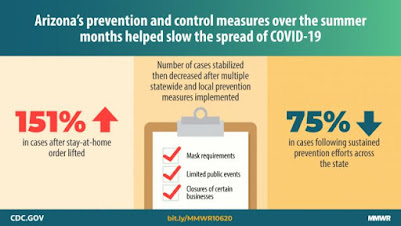 Stack, a physician, also pointed to a new Centers for Disease Control and Prevention study showing that Arizona saw a 151% increase in cases after it lifted its stay-at-home orders and largely opened its economy. The spike caused the state to increase its mitigation efforts, including mask mandates, closing bars and gyms and reducing restaurant capacity to 50%. The report says these actions resulted in a 75% decrease in cases. “We know what works,” Stack said.

Beshear pointed to the latest guidance from the White House Coronavirus Task Force report, which says “Masks must be worn indoors in all public settings and group gathering sizes should be limited.”
The report, covering Sept. 26 to Sunday, Oct. 2, puts 75 of the state’s 120 counties into one of the danger zones, up from 56 the previous week.
The number of counties in the red zone increased from 14 to 26; the orange zone number dropped from 22 to 20; and the yellow zone number rose from 20 to 29. The report says 62% of the state’s counties have moderate or high levels of community transmission of the virus.
Statewide, the report puts Kentucky in the red zone for cases, ranking it 16th in the country. It places the state in the yellow zone for the share of residents testing positive, ranking it 10th.
Communities in the White House red zone have weekly positive-test rates higher than 10% and more than one new case per 1,000 residents. Those in the recently added orange zone have 0.51 to 1 new cases per 1,000, and a weekly positive-test rate of 8 to 10%, or one of those two conditions and one condition qualifying as being in the red zone. Yellow-zone communities have new cases between 0.1 and 0.5 case per 1,000 and a positive-test rate of 5% to 8% — or one of those, with the other in the a higher zone.
Beshear said the report largely lines up with the state’s incidence-rate map, which has 21 red counties today. Red counties on the state map have at least 25 cases per 100,000 people in the last seven days.
Beshear announced four more deaths from covid-19, bringing the state’s death toll to 1,218: an 89-year-old man from Christian County; two women, 69 and 78, from Jefferson County; and an 85-year-old man from Henderson County.
In other covid-19 news Tuesday:
Previous ArticleBeshear to step up enforcement of mask mandate, says more would obey it if Trump wore one; criticizes the president’s tweet
Next ArticleBeshear: Some local officials will enforce mask mandate, while others will only encourage; Fayette case backlog makes a record