Kentucky Health News
Only five of Kentucky’s 172 school districts have not passed a tobacco-free policy to line up with a state law that went into effect July 2020, according to the Foundation for a Healthy Kentucky.
The law, for which the foundation campaigned, bans use of all tobacco products, including electronic cigarettes, on school-owned property and school-sponsored events in all public schools. It includes an opt-out provision that allows school boards three years to opt out of the ban, which is why five school districts don’t have it.
“Our goal was not only to encourage more school districts to adopt tobacco-free campus policies, but to help change the culture of Kentucky’s school environment to a place where tobacco use is simply not the norm, no matter what time, what day of the week, or what event is happening on campus,” Ben Chandler, president and CEO of the foundation, said in a news release.
The districts that have opted out are in Union, Clay, Leslie, Knott and Bell counties. The two independent districts in Bell County, Pineville and Middlesboro, adopted the tobacco-free policy after the law was passed.
When the bill became law on April 9, 2019, only 74 of the 172 districts, or 42%, were fully tobacco-free. Now 97% are.
Bonnie Hackbarth, the foundation’s vice-president for external affairs, told Kentucky Health News that the foundation is trying to work with the five holdouts and encourage them to pass tobacco-free policies. “Our hope is that they will do so soon,” she said. “Going from 42% to 97% is a huge victory, but we definitely don’t want to leave out those students in those five counties that remain and so we just encourage them to look at the benefits of making tobacco use not the norm on campus.”
Hackbarth said the most common reason they get for not yet passing the policy is that school districts say they need to give the adults in their communities time to get used to the idea of not being able to smoke at events where they’ve always smoked, like football games.
“But it’s what’s right for our kids,” she said. “And it improves the health of everyone by reducing exposure to tobacco. The research shows these policies work.” 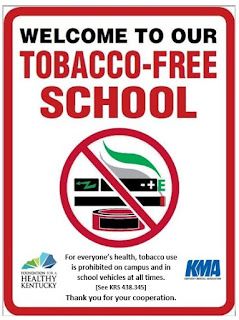