White House Coronavirus Task Force table; for a larger version, click on it
—–

By Melissa Patrick
Kentucky Health NewsKentucky is now in the worst danger zone for both its coronavirus case numbers and the share of Kentuckians who have tested positive for the virus in the past seven days, according to this week’s White House Coronavirus Task Force report.

“Current mitigation efforts are inadequate and must be increased to flatten the curve to sustain the health system for both covid and non-covid emergencies,” says the report. “We share the strong concern of Kentucky leaders that the current situation is worsening and that all Kentuckians need to do their part to stop the spread. The governor’s active measures are commended.”

Gov. Andy Beshear noted at his Nov. 18 news briefing that the White House and his administration “are all in agreement about how dangerous of a spot we’re in” and said this report should “stop the goofiness.”

“The White House supports the things we have done and hopefully the things that we’re gonna have to do,” he said. “This isn’t a red state, blue state, Democrat, Republican, liberal, conservative, any of that. It’s a virus that’s coming for everybody it can.”

Kentucky has been in the red zone for case numbers, indicating 101 or more new cases per 100,000 people, every week since the Sept. 27 report, but this is the first time the White House has put Kentucky in the most dangerous zone for positivity, meaning it now has a rate at or above 10.1%.

Beshear has noted several times that the state uses a different data stream than the White House, which results in a lower positivity rate. But the bottom line is that the rate keeps going up in both the state and federal report — and that’s reason for concern.

The White House reports a 12.5 percent positivity rate in Kentucky. On Nov. 18, the state reported that rate to be 9.1%, the highest it’s been since testing became widely available in the state.

“Remember when we had it under 4 and we were concerned when it went up to 5?” Beshear asked at his daily briefing. “This is a very dangerous territory.”

The White House report, which covers Saturday, Nov. 7 to Friday, Nov. 13, says Kentucky ranks 24th highest in the country for cases and 20th for positivity.The report says 89% of Kentucky’s counties had a moderate or high level of community transmission, with 55% of them having high levels.

The report stresses that “mitigation efforts need to be increased” and suggest “limiting restaurant indoor capacity to less than 25% and limiting bar hours until cases and test positivity decrease to the yellow zone.”

Beshear is expected to place additional restrictions on bars and restaurants today at his daily briefing. They are currently allowed to operate at 50% capacity.

The report calls on the state to recruit “local influencers” to message the importance of wearing a mask in pubic, to stop all gatherings beyond immediate households until both cases and positivity rates are in the yellow zone, and to get a flu shot.

It calls for active testing in K-12 schools, calls on teachers and students to wear masks, and for schools to  “consider pausing extracurricular school activities, even though athletics are not transmission risks, as the surrounding activities are where transmission is occurring.”

The report also asks colleges and universities to encourage their students to not let their guards down as Thanksgiving break approaches, and to follow the Centers for Disease Control and Prevention holiday guidelines if they are going home.

The CDC guidance says, “People who do not currently live in your housing unit, such as college students who are returning home from school for the holidays, should be considered part of different households. In-person gatherings that bring together family members or friends from different households, including college students returning home, pose varying levels of risk.”

Kentucky’s recent surge is part of a national one. 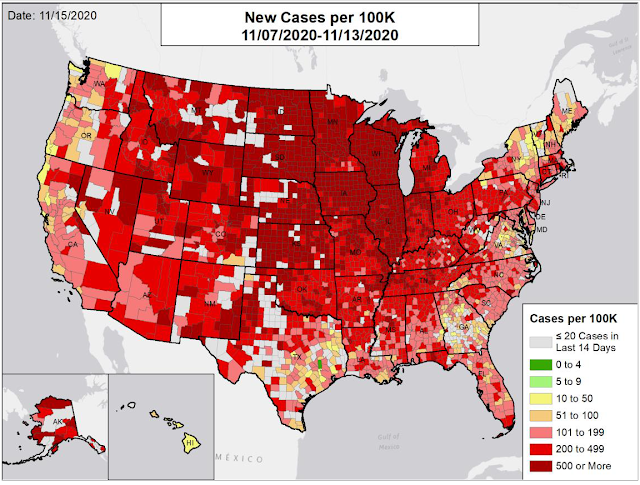 Previous ArticleNew coronavirus restrictions will include bars and restaurants; Tuesday is deadliest day for confirmed covid-19 deaths, with 33
Next ArticleBeshear stops in-person schooling as of Mon., indoor food service as of Fri., imposes other restrictions; legislative leaders object